Conversation on a Way Forward—AC2018 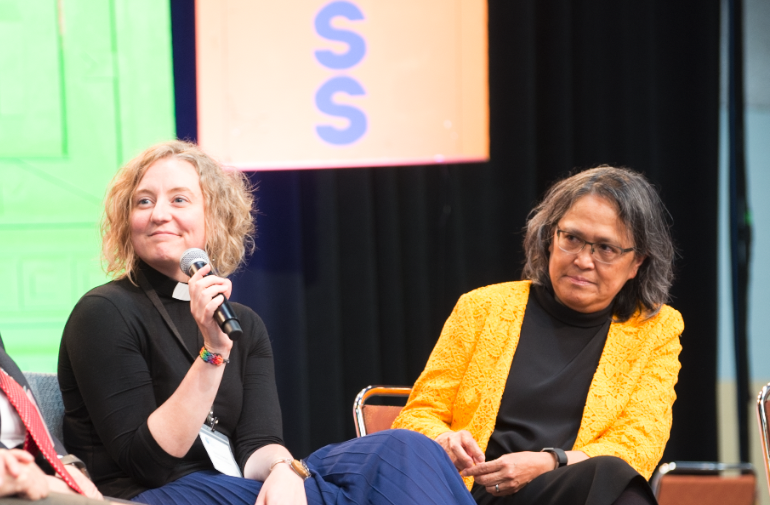 “A Conversation on the Way Forward” drew some of the emotion surrounding the issue to the surface, as a sampling of the Iowa Conference’s General Conference delegates shared their thoughts, positions, and also some fears over the outcome of the decision to be taken up at the Special Session of the General Conference in 2019.

Bishop Ough is the current President of the Council of Bishops and took part in the Council’s discernment process considering the work of the Commission on a Way Forward.

He updated the Iowa Annual Conference Session on the Council’s decision to recommend a plan for the United Methodist Church in determining its future regarding the issue of human sexuality.

The Council of Bishop's will submit a report to the Special Session of the General Conference taking place February 23-26, 2019, in St. Louis, and recommend The One Church Plan as the best way forward for The United Methodist Church.

After Bishop Ough’s update, the discussion commenced. Participants fought back tears at some points, and prayer was a recurrent theme throughout, as was staying true to the mission and serving Christ.

Phil Carver said he thought The One Church Plan was the most hopeful option. He also said he respected that there were differences on the panel on the decision and acknowledged that everyone was looking for a way to help one another long-term in this.

Norma Morrison acknowledged she and Carver were not on the same page with the decision and pointed out that delegates do not know yet what they will be voting on in 2019.

Morrison said she thought rehashing the issue evoked the definition of insanity—continually repeating something expecting a different result. She questioned the idea that the One Church Model would, in fact, result in one, unified church.

Morrison noted that some people had said from the start they couldn’t remain in a church involved in something they found problematic theologically. She said that it breaks her heart to think of the people who have left the church over this.

Lilian Gallo-Seagren said for her there were a few things at play; one being that on a personal level her mind and heart were colliding, and she knew she couldn’t perfect her mind.

She’d been told earlier in life that as a pastor your community might not always match your thinking, and therefore you must decide in some cases if you want to stay.

The One Church Plan looked less messy than the others, she said, but would also bring the war to the local churches, and people in the pews would then have to discern.

Gallo-Seagren was hopeful that the no matter the outcome, the Iowa Conference’s delegates to the General Conference would commit to coming home and working together.

Katie Dawson said she doesn’t think of being a United Methodist as being defined by an issue and acknowledged that, no matter what, some people would leave the church as a matter of conscience. Dawson said that unity in Christ was bigger than the United Methodist Church.

Morrison shared that she’d been grieving for 11 years over the issue and spoke of how it may be time to part ways and hoped if that happened it would be with the two factions blessing each other’s ministry. She argued it may be possible to reach more people through separate ministries. Morrison questioned what a gracious exit would look like, should there be an official split.

Gallo-Seagren shared that it would be the saddest thing for her if a split were to happen. But she said that would be preferable to have continued demeaning of one another within the Church.

This was painful, Gallo-Seagren said, everyone had come to know each other. If a split happens, she said, that will be a sad day.

The image of the Body of Christ was the strongest one for him in thinking about the issue, Carver said, and he didn’t know whether it could be maintained in full. He also said that he hoped that with any parting of the ways that it could happen amicably.

Bishop Laurie commented that as bishop she also had somewhat of a balcony view of things in the Conference, and she sees how Conference members love each other. In the bigger view, we all love Jesus, she said, and want to change the world, and still, something is preventing unity.

Conference members have all built relationships and have gone into those relationships with hearts of peace, she said. In the end, preserving relationships is most important, she said, so we still have them in the end even if the Church looks different.

Bishop Laurie said she knew that God is with the United Methodist Church and that all the Conference’s churches were doing amazing things, even if they don’t all think the same.

It’s okay that we all think differently, she said, and her prayer is that in churches in the Conference would still have relationships of trust.

Her responsibility, Bishop Laurie said, is to see every person as a precious child of God.

Morrison requested prayers from all who were present, for when the moment came to push the button for the vote. She said even if she knew what God was calling her to do in the vote, that prayers were needed, asking for then for all the delegates.

Carver pointed out that the legislative process would determine that specific content of the final vote.

Bishop Ough stressed to those present not to decide until it the actual time of decision. More petitioning was to come on the issue, he said, and he asked everyone to practice what they were seeing there in the discussion—respectful dialogue.

He also emphasized staying focused on the mission.

And he noted for everyone that whatever the church looked like after the decision, most of what they do will not change.

Bishop Ough said that until everyone put down preconceived notions and surrendered to the Holy Spirit, the result would always be the same.

More information on the Iowa delegation to the Special General Conference is available HERE.

For more information on the Commission on the Way Forward, click HERE, and for the Council of Bishops, click HERE.

Specifics on the 2019 Special Session of the General Conference are available HERE.