Council on Finance and Administration report—AC2018 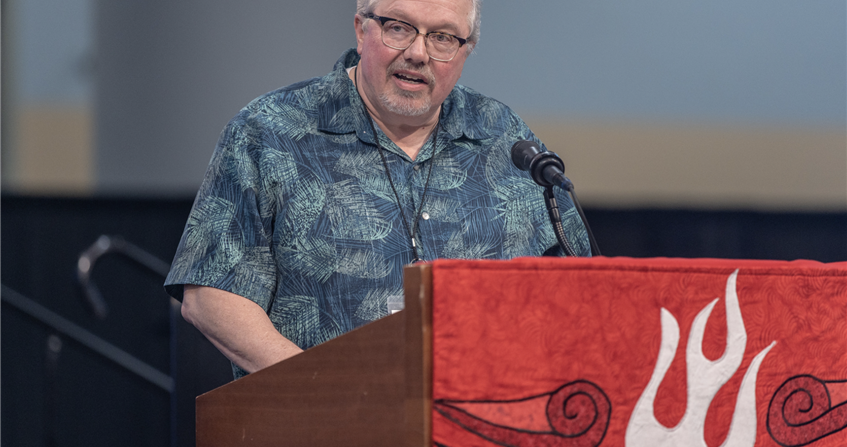 June 09, 2018
share
The concept of Covenant can’t be done half-way, Rev. Jon Disburg, said the during the Saturday installment of the 2018 Annual Conference Session, and it extends to the Conference Budget and apportionments.

The president of the Council on Finance and Administration (CF&A) and pastor for Ottumwa First United Methodist Church explained that unpaid apportionments are a reality, and because the notion of covenant is integral to the mission of the United Methodist Church, the CFA takes this into account when preparing the budget.

“The word "Covenant" has been a very important word to us this past year,” he said, and “the CF&A seeks to remind itself and this Conference that apportionments are indeed the method of funding the connectional covenant together.”

“This interdependent covenant is one of the distinguishing marks of our United Methodist understanding of shared ministry and mission,” said Disburg.

Disburg offered the CF&A report Saturday morning just prior to the presentation of the Working Budget.

He explained for the Annual Conference Session how Covenant faithfulness is not seen in partials.

This covenant binds us together, he said, and this inter-relational nature non-payment of apportionments is taken into account in the budget process.

“So, it is with our membership covenant—as United Methodists—we are in covenant relationship with one another, said Disburg. “Because of the mutual interdependence, we provide ways in which our interdependence is expressed financially.”

The CF&A allows far the very real fact that just under 2/3 of the churches in Iowa will pay 100% of their apportionments, Disburg explained, leaving just over 1/3 that will or may not pay 100%.

“However, we are in covenant—not kind of—not sort of—we are ALL in covenant with one another, said Disburg, “Conference staff— boards, agencies—mission sites —local churches...therefore, we have this budget item for unpaid apportionments.”

This is not new, he said, it’s only the fact that it is visible that is new.

“We’ve shown it as such for about 6 years,” Disburg said.

It used to be managed through artificial markup, he said. The CF&A would tell those submitting budget requests to only expect 80% of their request.

But six years ago, CF&A decided to be as transparent as possible.

“Our covenant of mutual interdependence bears with its full commitment to mission and ministry and one another said Disburg. “The budget that will be voted on Monday will be the Conference budget that we are all a part of.”

“The budget figures for each board or agency is what they have—not kind of have it—you have it,” said Disburg. “But we are in this as a connection—and a transparent one at that—and we as CF&A owe it to all of us to openly acknowledge the cost of covenantal discipleship as expressed in the unpaid apportionment allowance.”

He concluded by moving the adoption of the working budget.