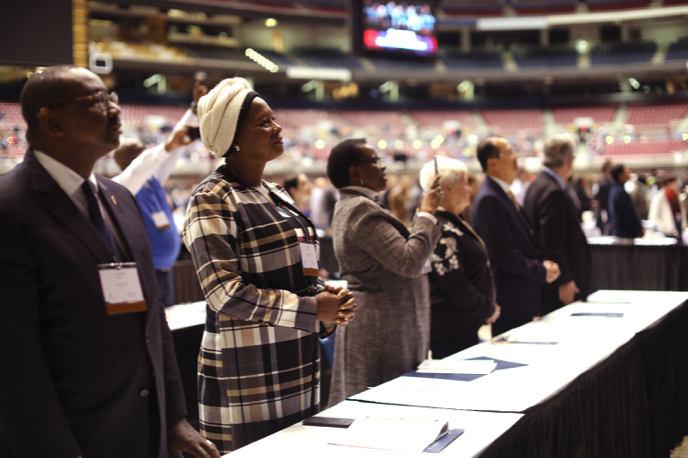 The United Methodist Church’s top court has found that while some provisions of the newly adopted Traditional Plan remain unconstitutional, the rest of the plan is valid as church law.

That was the Judicial Council’s ruling on a requested review of the Traditional Plan, which was approved during a special denomination-wide legislative session in February to strengthen enforcement of bans on “self-avowed practicing” gay clergy and same-sex weddings.

In a separate ruling, legislation to provide an exit strategy for local churches wishing to leave the denomination meets three minimum requirements and thus is constitutional “when taken together with the consent of the annual conference” as specifically outlined in the Book of Discipline, the court said.

Both decisions came at the conclusion of the Judicial Council’s April 23-26 meeting.

In Decision 1378, the top court said it applied “a severability test” to determine if the unconstitutional provisions of the Traditional Plan could be severed from what remained.

“Unless it is evident that the General Conference would not have enacted those provisions that are within its legislative powers without those that are not, the invalid parts can be separated if what is left is not inextricably linked and can function independently,” the decision said.

The Judicial Council has now ruled three times on the Traditional Plan petitions it has found unconstitutional. Affirming previous rulings from October and February — Decision 1366 and Decision 1377 — the April decision following the adoption of the Traditional Plan still finds seven of its petitions to be unconstitutional, including four that were amended during General Conference 2019.

Decision 1378 also declares seven petitions to be null and void.

Three amended petitions — 90033, 90034 and 90035 — still would allow the Council of Bishops to place any bishop on involuntary leave “in the retired relationship with or without their consent” without a specific right to appeal. That “constitutional infirmity” cannot be solved by arguing that other parts of the denomination’s lawbook would give “an accused bishop the right to appeal the findings of the Council of Bishops,” the court said in Decision 1378.

The Judicial Council rejected the argument from some of the briefs it received that Judicial Council Decision 1210 “is a precedent” for declaring the entire Traditional Plan unconstitutional. That decision — regarding a proposal called Plan UMC adopted by General Conference 2012 to overhaul the denomination’s structure and organization — found the constitutional defect “affected every part of the plan.”

In contrast, the court said, the Traditional Plan “consists of a series of petitions that were separately numbered, dealing with completely different paragraphs of The Discipline. One petition does not affect the other.”

The Judicial Council also said it could reasonably conclude that General Conference 2019 would have enacted the constitutional parts of the plan anyway. “The legislative history contained in the record supports our finding that the delegates voted to adopt the TP fully cognizant and in spite of its constitutional flaws.”

Judicial Council member Beth Capen, in concurrence to Decision 1378, pointed out that inherent problems — related to constitutional authority or conflict with The Discipline — remain in some of the petitions. “Presumably these matters will end up before the Council again in one form or another,” she wrote. “Hopefully, General Conference will be proactive in reconciling these problems.”

In Decision 1379, the Judicial Council reviewed an amended version of Petition 90066, one of the petitions designed to provide “a gracious exit” for local churches that want to leave the denomination.

The council previously found 90066 unconstitutional in Decision 1377, but it has now determined that any General Conference legislation permitting such an exit must meet three minimum requirements:

The amended version of Petition 90066 substituted the “Minority Report on Disaffiliation” for the majority report, leading to the creation of a new paragraph, 2553, in The Discipline. That paragraph deals specifically with the “limited right” to disaffiliate for reasons related to church law on homosexuality.

That new paragraph “satisfies the first two conditions” for the disaffiliation legislation while a provision elsewhere in The Discipline “supplies the missing requirement” for annual conference action, the court ruled.

Bloom is an assistant news editor for United Methodist News Service and is based in New York. Follow her at https://twitter.com/umcscribe or contact her at 615-742-5470 or newsdesk@umnews.org. To read more United Methodist news, subscribe to the free Daily or Weekly Digests.