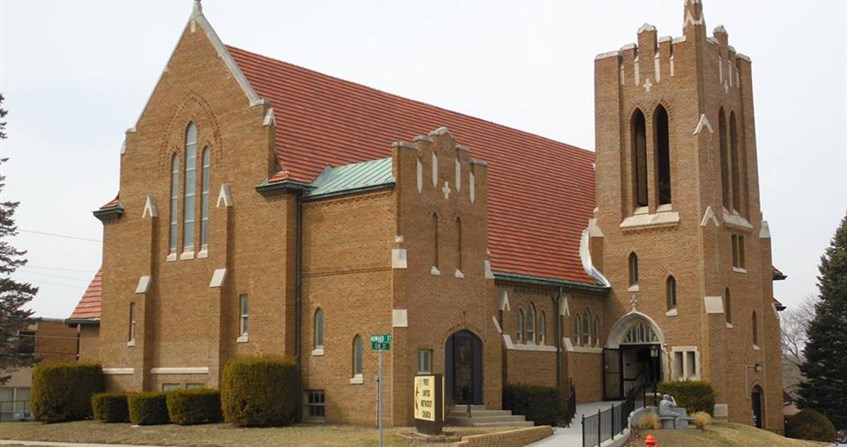 Creston is a rural town located in the South Central District of the Iowa Conference. In churches of all denominations, rural churches can have trouble with growth, but the Creston First United Methodist Church experienced the opposite. In just a year, the church has had 4 baptisms, 17 new members, created new instrumental groups, hired a new choir director and nursery director and raised money for veterans.

“It’s hard to put into words the energy and passion people have,” said Pastor Jodi Rushing. “It’s hard to explain the spirit, but it’s moving.”

Rushing gives much of credit for the church’s growth to the laity. The core leadership has helped start several groups within the church. The laity leads Bible studies every week and lead prayer services. They help coordinate fundraisers and community events.

“There’s a great enthusiasm,” said Rushing. “They are not afraid to share with others outside of the church community.”

Recently, the church hosted a soup supper to raise money for the local volunteer fire department. Some of the volunteers did not have some of the protective gear required to do their job safely. The church members and community members raised $1,000 toward the purchase of safety gear.

“He brought the idea to our mission chair and they decided to do it,” said Rushing.

The church also collected soup and crackers for the local food pantry and held a diaper drive for a local parent support organization that provides classes for new parents and gives credits for parents to receive free diapers, car seats and other baby essentials.

The church also helps the children in the community. Every year, the church hosts a Trunk-Or-Treat. In the past, about 50 or 60 children would attend. This last fall more than 130 children attended. They also hosted a breakfast and lunch program for children in the summer and sent hundreds of kits to Ingathering. Also, using Sunday School offerings, the church purchased an ark for the children.

Expanding music ministry
Community ministry isn’t the only thing growing at Creston First. The music program has also grown. They recently hired Ashley Haines as choir director. Haines is a native of Creston, but she recently received her Master’s degree in music after studying in Ireland.

Haines attends the Catholic church in Creston, but she has used that to help create connections. When Haines conducts, her parents attend Creston First. In the upcoming Good Friday service, Rushing will preach at the Catholic church for the ministerial association. Haines has asked the priest if the Creston First choir or a small group can sing at the service.

“Ashley has great gifts in music, which gets people involved” said Rushing. “It helps that we have a good group of people who come out to sing.”

The youth are getting involved with the music program at the church. Several of the youth sing or play an instrument. There are also some adults that have played instruments. In all, seven or eight people can play piano, guitar, saxophone, drums and trumpet.

“We’re going to start utilizing those gifts more in worship,” said Rushing. “We hope to have that going in time for Easter.”

Capital Campaign
The church is also helping itself in order to continue helping the community.

The church members are in the process of roofing, point tucking, fixing gables and restored the pipe organ. Capital campaigns can be a long process and people can get tired of giving. But the Creston church has been creative in its approach to raising capital funds.

One event for the capital campaign gave church members a chance to throw a pie into the face of one of the trustees. Another church team is putting together a Miracle Sunday, which will host a dinner and auction. The Miracle Sunday would also include the public.

Rushing said, while the updates to the building make going to church more enjoyable, but it also benefits the community. The church is used for several groups and events in the community including Boy Scouts, Kiwanis, PEO, Lions, a weight loss club, a photography club and a Valentine’s dance.

“Our church is used for all kinds of things in our community,” said Rushing. “It is very much a community building.”

Attracting new membership
Everything the church has done is what appeals to new members, said Rushing. The worship attendance has grown to between 110 and 130 attendees on any given Sunday. Several young families have joined the church family. Rushing attributes the attraction to the church operating beyond maintaining itself. The mission in the Creston community and beyond keeps them coming back.

“They want to see their efforts are going to make a different and be strengthened in the worship experience,” said Rushing. “I think they see this church being involved beyond just ourselves.”