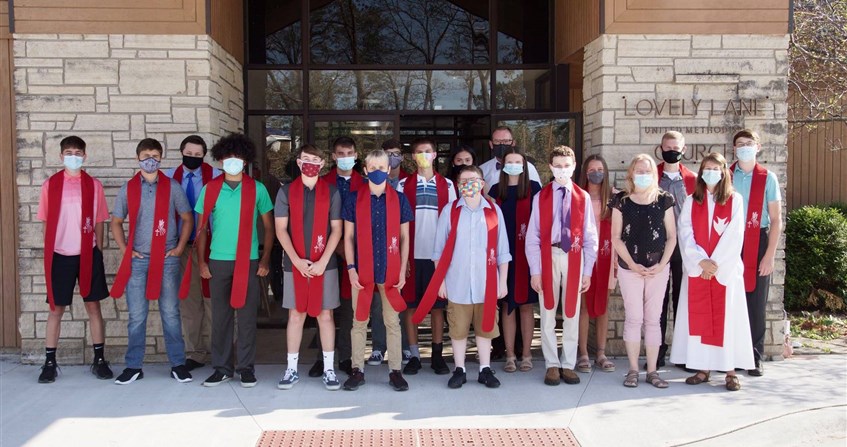 This is the sixth in a series of Faith In Action reports on how churches, ministries, and people from the Iowa United Methodist Church are making a difference and changing lives following the derecho disaster in August 2020.  A typical year of confirmation turned upside down for Lovely Lane United Methodist Church in Cedar Rapids after quarantine and the derecho on August 10. That didn’t stop Rev. Scott Meador from completing the year with a celebration.

“We started back in the fall of 2019 with the goal of confirming our students the Sunday after Easter,” Meador said. “We had a large group this year, 16 kids, and we met twice a month on Wednesdays.”

Like many other churches, Meador said they served a meal and kids club and music groups usually met at the church at the same time. His confirmands did service projects, listened to mentors from the church during class, and led the Ash Wednesday Service in February.

“When the pandemic hit, we pretty much had done all the classroom work at that point,” Meador said. “We weren't really sure what we could do for confirmation because we knew we wouldn't be worshipping in person and certainly knew that we wouldn't be able to have confirmation Sunday.”

Meador put everything on hold until June when he scheduled time on Zoom for the students to get together for one last time. The students picked up red stoles from the church and a staff person took their photo.

But Meador just couldn’t leave it at that for his group. 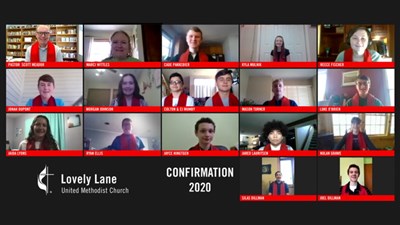 “I suppose I could have said it's just not going to happen, but as we got into the summer I knew we needed to bring some type of finality that the kids are confirmed,” he said.

A staff member suggested having only the necessary staff and the confirmands in the sanctuary and then having a parking lot celebration with the parents. They went ahead with plans to record it and place it in the livestreamed church service a few weeks later for the whole congregation to see.

There was only one more catch: The August 10 derecho that wiped out power, trees, homes, and businesses in the Midwest.

“Two weeks after the derecho hit, we had scheduled our confirmation Sunday,” Meador said. “That same day Servicemaster was here cleaning up the building, and we had three big, green vehicles in the church parking lot. You had destruction in the background, you had cleanup vehicles there, you had the heat and our confirmation group.”

“It’s a time that they won't forget, but we got them all confirmed,” he added.

Parents told Meador it was a welcome relief for them in the midst of the stress from the pandemic and derecho.

“I think they kind of enjoyed getting to do something a little bit different than clean up from the derecho, and I'm sure some of the families had a meal at their house or a cake or a gift for their son or daughter who got confirmed,” he said. “The derecho showed all types of silver linings. People came together, met their neighbors, and are helping each other out.”