Destroyed Nativity reminds Woodbine UMC of the 'simplicity of Christmas' 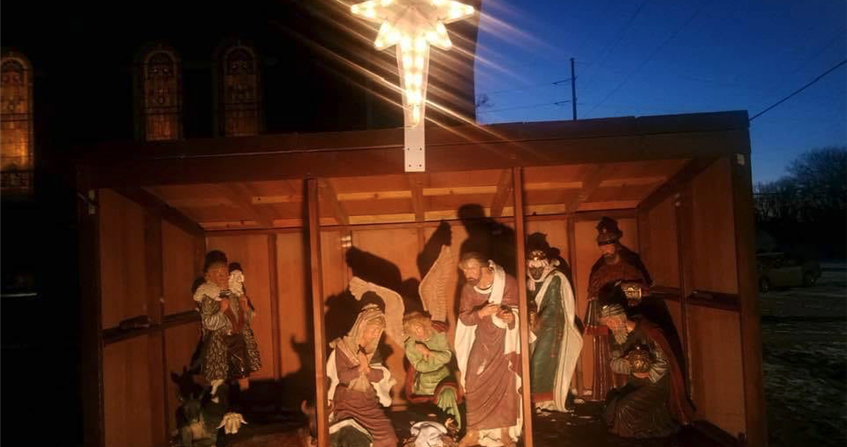 Pastor Regina Harrison was finishing a long day in the Woodbine First United Methodist Church office when she heard the winter wind howling and sleet hitting the church’s windows. She decided it was time to pack up her things and head home. Little did she know, Harrison would be doing much more work that night.

“I grew up in the south and have been through hurricanes, and it literally sounded like a hurricane out there,” Harrison said. “The wind was blowing about 50 miles per hour, and it was well below zero as I drove out of the church parking lot. I did a double-take as I looked right before turning.”

The church’s large nativity barn that faces Main Street had collapsed into the manger scene, decapitating a Wiseman, shattering a sheep, and breaking the arm of baby Jesus in his manger.

She walked up to survey the damage and decided to call reinforcements.

Jefferson and Nikki Davis are members of Woodbine FUMC and own an art gallery and coffee shop in town. They instantly sprang into action as soon as they hung up the phone with Pastor Regina. 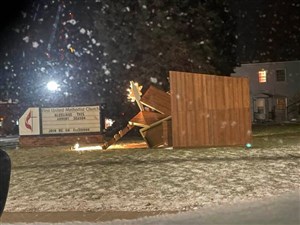 “I asked them if they thought we should leave it until morning when we could see better, and the wind was predicted to calm down, but they wanted to come to take a look with me to see what we could do,” Harrison said.

Harrison began to pick up pieces of the figures and was dragging the body of the decapitated Wiseman inside when the Davises arrived. They worked together to bring in the panels of the stable.

“The barn is about 12 feet tall and six feet deep, about the size of a small shed,” Jefferson said. “The large fiberglass figurines are about four feet tall and were pretty hard to carry in the 50 miles per hour winds. The smaller figurines are made of ceramic.” 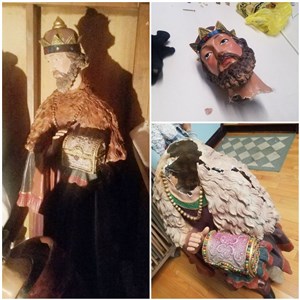 “Some of the nativities roof was blown at least six feet away from the barn that houses the nativity scene, and one of the walls was flapping in the wind,” Nikki said. “Pastor and I were walking backward, trying to get into the church against the wind and carrying what we could. I had to giggle a little after the fact because I’m sure the two of us looked very silly carrying pieces of shepherds and a Wiseman’s head in the middle of the storm.”

Once the barn was stable enough to last the night and as many pieces recovered as possible, they decided to go home until about midmorning on Christmas Eve.

“Nikki had called me hysterical about the nativity, and I was just beside myself,” said Barbie Schafer, who served as the Christian Educator and had helped set up the nativity scene. “Nikki was worried about Pastor Regina, so I disconnected with her and checked in on Pastor. When I called Nikki back, I said, ‘You know, just a couple of days ago, Pastor put out this beautiful message about the simplicity of Christmas and the true meaning of Christmas, and maybe, maybe what we need to do is just take a step back and instead of trying to quickly fix everything tonight.’”

Jefferson surprised everyone, including himself, with what he did the following day. 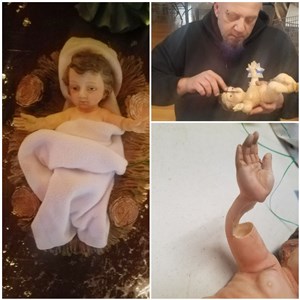 “I’m an artist, a metal sculptor, and to me, that means in scenarios like this is, I am a tool of the process, and my hands were chosen to perform the task,” he said. He has donated huge memorial sculptures in honor of fallen police officers in the past and added that “this situation definitely fits that same category of giving back.”

“I didn’t decide that I was going to get up at three o’clock in the morning to go try to fix it,” he said. “I don’t even take credit for that idea. Our nativity was in pieces all over the churchyard, and when I woke up, I had this mission that had to be fulfilled on Christmas Eve.”

Nikki was surprised that he had snuck out of the house and gone to work.

“I assumed he was letting the dogs out and starting some coffee for me, and by the time I got up, he was back and just said, ‘I went down to the church. The barn’s fixed.’”

As a small group gathered at the church that morning with masks and physically distanced, they began repair work, determined to have the nativity put together before the 10 p.m. candlelight service.

“It was incredible to walk into the church and see all those people working together,” said Harrison. “I told them it was okay if it wasn’t all put together by that night, but they worked all day taking short breaks for lunch and maybe a nap.” 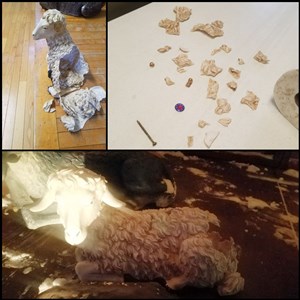 “The lamb was a four-hour puzzle, and the broken pieces didn’t fit back together as they were supposed to fit,” said Jefferson. “But that’s how it is. No matter the pieces you’re left with, no matter what situation you’re in, keep going. Keep moving. Our whole world is kind of broken up right now and matter what challenges are ahead of us; we just keep going.”

I was blown away when I saw the end product,” said Harrison. “Besides the poor sheep’s backside, everything was put back out there and looked fine. It was just amazing.”

The planned Christmas Eve service could go on with its nativity intact.

“We had an FM transmitter, and I had bought battery tea light candles,” said Harrison. “We had about nine cars and 15 people socially distanced in the churchyard near the nativity. I had Jefferson say a few words, and I gave a short message. It was perfect.”

“I think it was a Christmas miracle,” said Harrison. “It’s just the church’s determination to get it taken care of that night to get it put back together. The connection was made by Jesus picking up our broken pieces, and I think it gave our church a little spark of hope. Not that we don’t have hope, it’s just been such a crappy year, and I think it’s something that God used to say, ‘I’m still here.’”