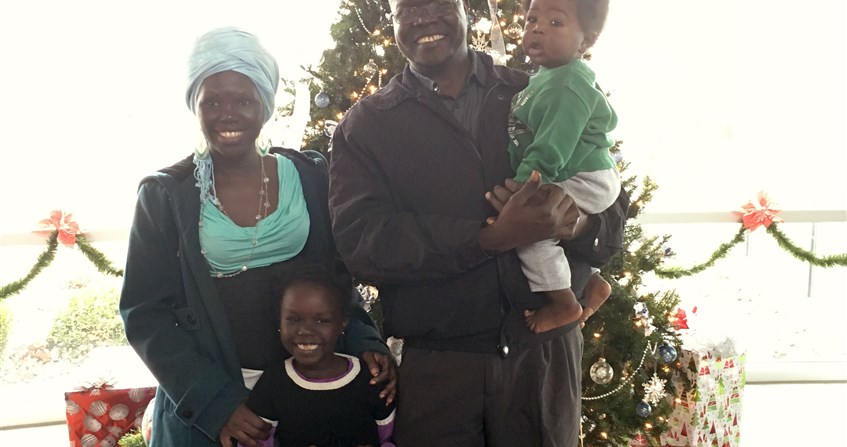 In 1983, Rev. Limmo was one of the thousands of children who became separated from their families and displaced in Northern Sudan seeking refuge from the war. He eventually made his way to Ethiopia, went to seminary and became a citizen of the United States.

The Mabaan tribe is from South Sudan, a country that is landlocked in Northeastern Africa with the White Nile flowing through it. It gained independence from Sudan in 2011. The Mabaan tribe of South Sudan number approximately 78,000 people. In December 2013, the young nation plunged into a crisis when a power struggle began between the President and his Deputy.  The fighting between government troops and rebel factions resulted in the death of thousands and over 2.2 million people fleeing their homes. A tentative internationally-mediated peace agreement was signed in August 2015. Many of the South Sudanese Mabaan tribe have settled in Des Moines as well as Massachusetts, New York, Texas, Nebraska, Utah, Canada and elsewhere.

The lively worship services began on November 15, 2015, at Epworth and continues to grow in attendance. Rev. Limmo has a long list of hopes for the families and congregation including providing Sunday School, Christian activities and education for youth, ELL (English Language Learners) and citizenship classes. All will require an established and dedicated team of mentors and volunteers.

The young and energetic families worship on Sunday’s from 12:30 - 4:00 pm in the Mabaan language. Many of the families struggle to reestablish themselves and become self-sustaining with jobs and education. Rev. Limmo knows the resolve it will take to change their lives. He has lived it first hand. He is grateful for the United Methodist Church for providing “Open hearts, Open minds and Open doors” to his family and the Maaban tribe.

In this season of giving, consider donating to this new community of faith. It will take donations of time, money and supplies to make Rev. Limmo’s dreams come true, but he knows that his tribe has the determination and faith to do just that.

You are invited to make an impact on the Southern Sudanese United Methodist Church (Mabaan). To support the programming and activities, send contributions through your local church remittance marked: Southern Sudanese Project #0267. For additional information, please contact Rev. Aaron Limmo at aciimban@icloud.com or Beverly Nolte at beverly.nolte@gmail.com.

Here is a list of donations that can be dropped off at the Epworth United Methodist Church at 412 Euclid, Des Moines, Iowa during office hours.