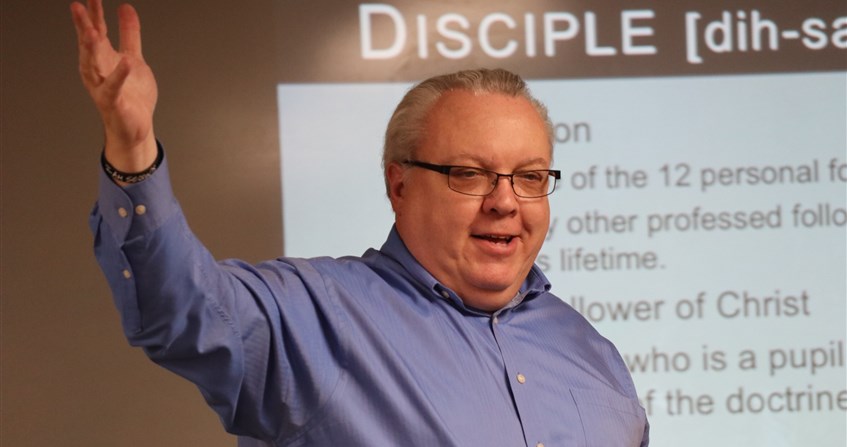 October 03, 2017
share
In the opening days of October, Ken Willard led “Discipleship Pathways” presentations in the Southwest, North Central, Northwest and South Central districts. Designed in part to further the conference’s “Wildly Important Goal” to see every community of faith develop a discipleship pathway by 2020, Willard’s workshops attracted hundreds of clergy and lay people eager to learn the process for developing a discipleship pathway.

For those who don’t quite know what to make of this terminology, Willard explains that “A pathway is the intentional part of helping people take their next steps. So we look at spiritual disciplines, we look at ministries in the church. What we’re trying to do is, instead of having a lot of things going on that end up being independent of each other – and they’re good things – how can we intentionally connect them so that those in our congregations have a sense that this all works together to help grow them as disciples of Jesus Christ?”
Click to listen to the conversation with Ken Willard
That may sound like a daunting challenge, but Willard tries to remind people that “there is no quick fix, there is no one thing. It’s a long process, but it’s something that we do for the rest of our lives, so it’s that important, for us to all grow closer to Christ.” He notes that "Discipleship is not a program or a curriculum. It’s not limited to being part of a class, small group, Sunday School, or other group.” And, he makes clear, it is most certainly not “a spectator sport.” To help congregations in the process of developing their own pathways, Willard and Pastor Mike Schreiner have written “Creating a Discipleship Pathway for Your Church,” a workbook that can provide some guidance and be used in conjunction with current and future discipleship trainings being held in various districts.

A Focus on Discipleship

In addition to being an author and a speaker, Willard is a consultant and a Christian leadership coach. His passion for this ministry comes from his own experiences growing up as a United Methodist. He says he has been blessed to be a part of several wonderful churches around the country, but his focus on discipleship began at his current church home, Morning Star Church, which he helped launch in 1999.

“We made a lot of mistakes, it didn’t just come overnight. What Pastor Mike Schreiner and I cover in the book, it took us 10, 12, 15 years of working on it intentionally. But I think it’s because we focused on discipleship rather than membership or programs or anything else like that, that God has really blessed our ministry. We have grown so much over the years. But I think it all goes back to a focus on discipleship, making disciples of Christ.” One of the most important things that Willard reminds people of in his seminars comes from Matthew 16. “There’s this wonderful story of Jesus walking with the disciples and he’s asking them ‘Who do people say I am? Who do you say I am?’ and he makes this statement – and I think many of us have missed it – where after Peter says ‘You’re the Messiah,’ Jesus says ‘You’re Peter, and on this rock, I will build my church.’ I think for a long time we’ve had the mistaken idea that it’s our responsibility to build the church. And I always tell churches and pastors, remove that burden from your shoulders. Christ will build the church. Our job is very clear: to make disciples.”

You Already Have the Resources

Willard offers a reminder that wherever your church is, you’re not starting at zero as disciples of Jesus Christ. “You currently have all the resources to do what God is calling you to do,” he insists, advising congregations to invite people to use their gifts in the ministries of their church’s community. “I’ve seen it, when we start making disciples, Jesus builds the church. It may be from 12 to 14, it may be from 50 to 500. Hallelujah for both! But I think by focusing on discipleship, by focusing on creating a clear path, we will see fruit.” At the workshops he is giving, Willard is helping the clergy and lay leaders to consider what a disciple is and to think about what is currently working well (and perhaps what is not) at their home churches. Then they will need to take those same conversations back to their churches, which Willard anticipates will be eye-opening.