The issue of hunger continues to touch Des Moines-area residents across all demographics, as demonstrated by statistics from the Des Moines Area Religious Council’s (DMARC) Food Pantry Network. 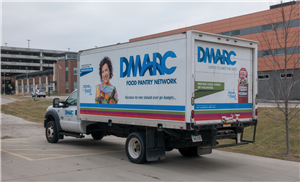 This amounted to 21,079 individuals (8,518 households), a record surpassing that of any other month in its 41-year history.

“Which we were not expecting, really,” Elzinga said, “to have an increase of that amount. It was almost three-thousand people than we served last November, and we’ve never even gone over 19,000, let alone 21,000.

“Volunteers are an integral part of our operations here, said, Elzinga. “We really would not be able to do all the work we do without volunteers coming in and helping.”

Conference Center staff have volunteered at the DMARC in the past as well.

United Methodists believe that everyone is called to participate in the outreaching ministry of Jesus Christ. According to the General Rules of the Methodist Church, John Wesley called the early Methodists to live out their faith by “doing good of every possible sort, and, as far as possible, to all.”

Most of the food distributed by DMARC is purchased from wholesalers and partners in the Food Bank of Iowa.

Volunteers sort the donated food, date-checking to make certain it’s within its expiration date, sealed properly and package it up to then be sent out. 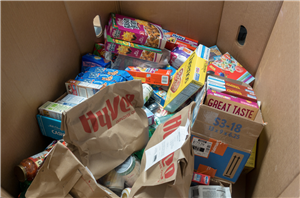 Twenty-five percent of the food is donated, and while it’s a quarter of the food distributed, Elzinga said, “Because of the amount of food we’re distributing, it’s not a small amount of food, either, we really do rely on the volunteers to make sure we get that all sorted and sent out.”

Typically, the DMARC Food Pantry has one-and-a-half semi-loads of donated food per month to process.

“We really rely on volunteers to help get the work done” he added, “and make sure that people are getting fed in greater Des Moines.”

Community donation initiatives are one of the ways people can support the Food Pantry. 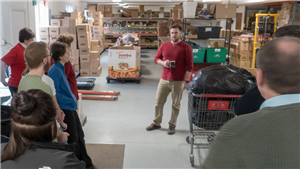 Some of the food collected by DMARC comes in via the Red Barrel Program in local grocery stores throughout greater Des Moines, where shoppers can donate food in the store. DMARC’s Hunger Sacks are also where shoppers can donate food that is needed is specifically identified by a flyer attached to the sack. Often companies and individuals will host food drives to benefit the DMARC food pantry as well.

“A lot of our (church) congregations support us,” Elzinga said, “especially on the third Sunday of the month, they’ll have a food pantry Sunday. And so our congregations are also a big support in terms of donated food.”

The food pantry can do a lot more with the same dollar than the individual consumer shopping retail by purchasing from wholesalers, so Elzinga said they always tell people that food is welcome, but DMARC can actually accomplish a lot more with monetary donations.

Additionally, he said, the pantry has the space to store food in bulk, better enabling bulk purchases.

There is no typical profile for DMARC Food Pantry clients, the organization says, and it doesn’t matter why someone is in need, DMARC’s policy is to help them.

At the pantries, clients can get a three-day supply of food once per calendar month. All of the pantries are select pantries, so people can select the food that they receive from the varying categories.

Pantry clients need only an ID for each family member, so the pantry can keep verify family size. There are no income requirements.

“If you need food, we’re here to help,” said Elzinga.

The physical pantries in the network are owned and operated by outside entities, such as faith-based groups, municipal organizations and other community-based non-profits. Food is provided to the partners by DMARC free of charge and the external entities use a centralized intake database to manage client info.

Fresh produce is purchased year-round and always available, though it’s more plentiful in the summer due to donations. This can come from individual donations, faith gardens from congregations and corporate giving gardens.

Aside from volunteers, the pantry also relies on individuals and groups to host or fund food drives.

“So, if you’re looking for a way to support DMARC, one possibility is at your workplace,” Elzinga said, “maybe talk and see if you can host a food drive for us there.”

“If you’re part of a PTO or something working at a school, or you have a student going to a school, and you want to suggest a food or fund drive for them to do for us,” he added, “that’s also appreciated.”

Aside from regular giving to DMARC, some congregations will take part in special donation events, such as the upcoming Super Bowl of Caring event coinciding with the Super Bowl in February. After that will be the Spring Into Action week in April where DMARC aims to promote food and fund drives.

Elzinga said the spring is one the slower donation times of the year, so at that time they try to get the issue of hunger back front and center.

“Also, we just rely on a lot of individuals for support financially and through food,” he continued, so if you feel like you have the money to give to support DMARC that’s always appreciated.”

Elzinga was grateful for the United Methodist Conference Center staff’s time and efforts volunteering with the DMARC Food Pantry warehouse.

And he said that on a personal level for him, being part of DMARC’s work assisting those in need is rewarding.

“Personally, it’s just such a blessing to be able to work here and dedicate my time to serving people in need,” he said. “I get to meet all sorts of great people who come out and really feel passionate about the community. And if I can help people help others, that’s just great for me.”