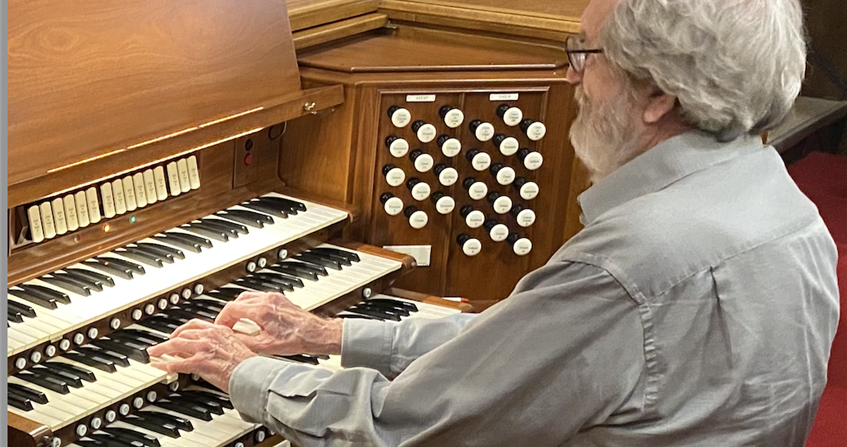 October 08, 2021
share
After nearly 60 years, Dr. Carl Bleyle is stepping down as organist and chancel choir director at Collegiate United Methodist Church and Wesley Foundation in Ames, Iowa. A Recognition Service will be held at the church on October 17 at 11 a.m.

In the spring of 1962, Bleyle received a job description from a friend for a position at Iowa State University as a teacher for Organ and Piano for the fall semester. The end of the position description reads, "May turn into a fine job. Church work available if interested." 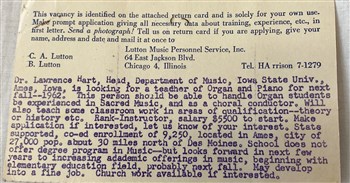 "My career has been a huge, huge series of breaks," Bleyle said. "I came out here, and the church had a brand-new organ — built in 1961 – one of the best in the business."

He added that he has "never, ever not had an organ job" since he began playing as a sophomore in high school in Ft. Thomas, Kentucky. His family wasn't well-to-do, but his parents still found the money for him to take lessons and then to attend The Conservatory of Music in Cincinnati, Ohio.

According to ISU, his research provided guidelines to help reconstruct through logarithmic calculations, organ pipe scalings, and tunings for 18th century European and American organs. Many of today's outstanding early music performers studied at ISU under Dr. Bleyle.

About 48 masses were performed as church services over the years at Collegiate under his direction, including Mass in G Major by Franz Schubert, Prater's Requiem, and Mozart's Mass C K317 "Coronation," to name a few.

Bleyle humbly credited this to his connections through ISU. "We were able to get a professional orchestra for each one of our performances, including the Concert Master of the Des Moines Symphony, who would play second-fiddle," he said. "We'd have excellent music students from ISU and sometimes even Grinnell College."

One of his favorite memories is working with the ISU Theatre program in 1977 to produce The Play of Daniel: A Medieval Liturgical Drama in conjunction with Collegiate UMC.

"You would not have recognized the front of the church because it had been totally turned into a stage," he said. All of the stained-glass windows in the church had to be covered in black plastic for the performances.

Another performance he takes pride in is the 500th Anniversary of the Reformation in 2017.

"We sang and played all music from Martin Luther's time for the church service," Bleyle said. "The unique thing about that was that we used not only the music from the time, we also replicas of instruments from that time. At the time, I thought, 'What church in the United States, what church in Europe, is doing a program like this?'"

Also, due to his connection with ISU, he was one of the founding members of an ensemble called Musica Antiqua, a now world-renowned group devoted to playing music from the Middle Ages and Renaissance.

Listen to a recording of Musica Antiqua from KHOI radio

While you might think a man that has studied 18th-century organs and can play all manner of medieval instruments would take himself too seriously, humor is at the base of everything Bleyle does.

A pastor at Collegiate once pulled him aside after a service to look at the stained-glass windows near the altar and asked, "Carl, do you see someone up there that looks a little like you?" pointing to a man in green with long hair and a beard.

"Oh yes," Bleyle answered slyly, "when the church was being built, the architect asked if he could use my image, so I told him yes."

"Carl requested a humorous send-off, so that's what we'll give him," said Dee Dreeszen, the Handbell Choirs Director at Collegiate UMC.

Dreeszen studied music under Bleyle at ISU. "I took organ lessons from him in college and played in Musica Antiqua," she said. "I went away for four years to teach after I graduated, came back, and was able to jump back into the things I loved because of him. He's fun to be around, and it's never a dull moment."

She added that the bell choir has something special planned for the service and that folks will have to join them that day for the surprise.

Randy Compton, a member of Collegiate UMC and, according to Bleyle, an integral part of keeping Bleyle organized, added that there will be videos from former pastors and others impacted by Carl's ministry in the church.

"My wife and I were both music majors at ISU," Compton said. "We had Dr. Bleyle for music history, and he twisted our arms to come be a part of the church choir. He ended up playing at our wedding."

Compton added that they would also read humorous quotes the Collegiate Choir has recorded over the years from Bleyle.

"It's been an extraordinary life, with all the traveling we have done and some of the performances that have happened here [in the church]," Bleyle said. "When I look back, I have nothing to be depressed about, even if I don't get to play the organ in church anymore."