First-hand view of the destruction in Ecuador 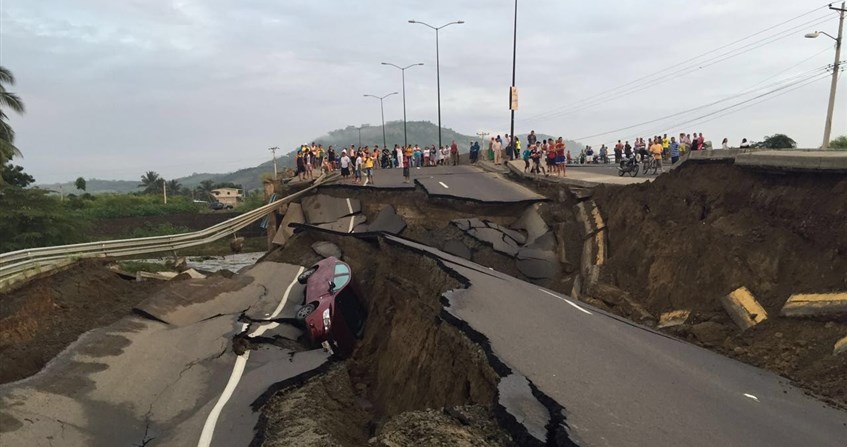 April 25, 2016
share
This first-hand account of the devastation in Ecuador was written by my good friend Paul Martel.  His foundation, FIBUSPAM, is on the ground already making a difference.  Their website suggests ways to help in the immediate aftermath of the tragedy. - Arthur McClanahan

11:55 on the night of April 21st, 2016 finds me in the 34th hour of my trip from Simsbury, Connecticut to the heart of the destruction caused by the brutal earthquake that struck the northern coast of Ecuador on Saturday, April 16 at 6:58 PM.  In just 3 minutes and from 12 miles beneath the earth’s surface, the quake laid waste several small cities, took more than 500 lives, injured thousands and displaced tens of thousands of people. These people now live in crude shelters in groups of hundreds along the highways. We visited two of these to distribute water, diapers and clothes. The people were drawn to our headlights like ghosts coming out of the night carrying their children and babies. I have no idea what they are hoping for or exactly how their situation might improve. The extent of the destruction and the depth of the poverty is overwhelming. The stench of death hangs in the air and cruelly, the earth continues to shake beneath them.

We spent two hours driving through the streets of the crumbled city of Pedernales with our mouths agape under our masks. Our objective, representing Fibuspam, was to find the command center located in the local stadium and meet the military commanders to get approval for a medical caravana to the area.  The stadium was packed with police, military, firemen, aid groups such as the Red Cross and scores of volunteers. I was particularly struck by the tent marked “desaparecidos” for those people still seeking those who are missing. I imagine there are many hundreds left in the massive rubble. We met with two leaders who welcomed our proposal and suggested several remote communities that were not yet receiving aid. They were actually glad that we were planning our caravana a few weeks out on May 8th due to commitments to two foreign groups at the clinic.  They said that the international urgency and attention would subside soon and the people would become more forgotten. 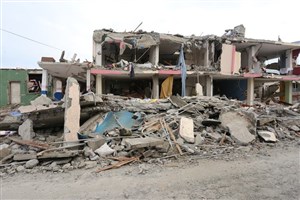 As we walked back to the car, I noticed the large number of 4-5 story hotels. This area is a very popular tourist area and the hotels were busy that night with many guests, many now buried forever in the rubble.  Looking at some of these buildings, it was easy to be deceived that the damage was not so great until you realized that at ground level you were looking at the second floor.  The first floors had simply disappeared.

There are many migrants from the Andes and Chimborazo province in this area.  They come here seeking the financial opportunity that tourism provides.  Many of these people have lost everything they gained over the last 10-15 years and will limp back to their communities in the Andes. One family was not so fortunate.  They are from the town of Ukshapamba in the canton of Colta. They fled to Pedernales about 10 years ago and established their own hotel.  The entire family was killed when the hotel collapsed.  Even in the face of humanitarian disaster, racism is inescapable for the indigenous who emigrated to this area.  I was told that they are often passed over when water and other provisions are distributed by local authorities.

That Saturday, Death’s hand reached all the way to Riobamba, the home of Fibuspam, 7 hours away.  A woman was dining in a local restaurant when the quake struck.  Becoming afraid the building might collapse, she ran out of the restaurant into the street where she was struck and killed by a piece of falling cement.  In another local incident, because it had rained for six hours before the quake struck, a large pool of water had formed above a small neighborhood.  When the shaking started, the water started a landslide that washed away three houses and killed three children.

Life is painfully hard for the people of Ecuador and for hundreds of thousands in six provinces, it just got much harder.  Indeed, the disaster will cost all 16 million Ecuadorians dearly.  In an already struggling economy, four new taxes have been levied to help pay for the recovery efforts.  The cost of rebuilding is estimated in the billions.  In solidarity with the scores who are suffering, the country has curtailed all public celebrations and fiestas.  It is heartwarming to see help arriving from all parts of the country and from many foreign countries.