From backpacks to sleeping mats 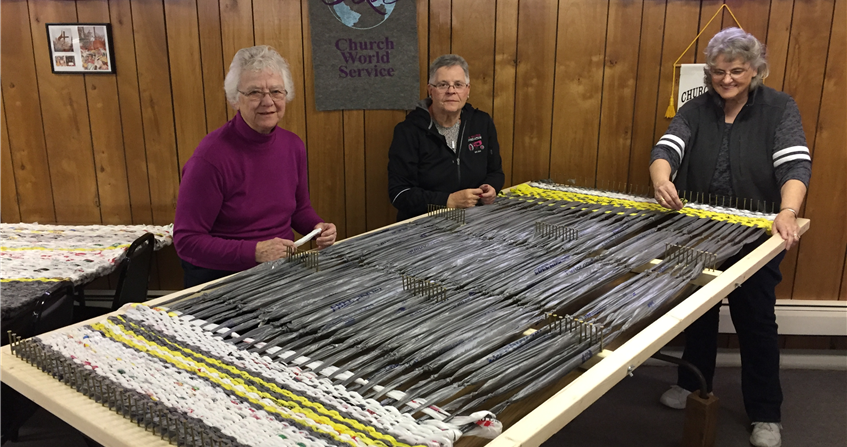 Sometimes a little creativity can go a long way. The members of Calmar United Methodist Church, near Decorah in northeast Iowa, with the help of other church groups have banded together for the past several years to help their community. But when one community outreach program ended, they group thought of a new way to help those in need.

“(After the program ended) this left 20 to 25 people, who had formed an alliance of volunteerism, without a cause to gather,” said Pastor Linda Thompson. “LuAnne Becker felt the onus of trying to find something, some cause, to bring our volunteers back together.”

Food backpacks
Several years ago, Becker and her husband Alan heard about a food program through the local food bank. The program gave children in need backpacks filled with food to help bridge the school breakfasts and lunches they normally eat through the weekend. The backpacks were filled will dry or canned, nutritional food. The church teamed with other churches in the area to identify who might need help.

“We went to the Catholic school and there were 12 in need already there” said Thompson. “This was not a Methodist gathering of volunteers, but volunteers from our Catholic and Lutheran brothers and sisters in Christ, as well.”

Together, the church groups met once a month to pack backpacks and distribute them to the different schools. Unfortunately, after a restructuring of the food bank, the volunteers had to call their monthly meetings to an end.

“So it ended up that we had a bunch of volunteers who saw each other for a number of years and they wanted another project,” said Thompson.

For two years, the volunteers lay dormant until Becker once again came up with an idea.

“She said, ‘what about the homeless?’” said Thompson. “She wanted to know what we could do for the homeless.”

Becker got to researching and came across an interesting project that not only helped the homeless, but also helped the environment: sleeping mats made out of plastic grocery bags. Plastic isn’t an organic material, so it is impervious to water, is easy to clean and doesn’t wear away as easily as cotton or other fibers. But, because of this, plastic bags can be a detriment to the environment because they don’t breakdown into organic material, clogging landfills.

“LuAnne thought it was the best of both worlds,” said Thompson.

Becker started to gather and disperse grocery bags to volunteers and recruited a carpenter to make a large loom to weave the mats. When the volunteers get together, they split into different station. One station flattens the bags. The next station folds the bags in half lengthwise. After that, the next station cuts the handle and that bottom end of the bag. Those bags get folded in half twice and gets cut into loops. After the bags are cut, the loops are looped together to create a large chain. From there, the chain is woven into a mat on the loom.

Trial and error
The loom needs four weavers. The completed woven mats are about six-and-a-half feet long. When the group created their first mat, they noticed the middle created an hourglass shape. Luckily, Becker is an artist and a weaver. Using her creativity and experience, the group learned how to create a perfect rectangle.

It takes about 1,000 bags to make one mat. The first mat took about 12 hours to make, but there were only two weavers at the time. Now with four weavers and working our the kinks, Thompson said it will only take about seven hours.

“The first one is always not as good, but your learn from your mistakes,” she said. “So we proceeded to revise it for the next one, so much so that we are starting a second loom.”

Calmar’s sister church in Burr Oak is making sure to use all the plastic material to help the homeless and the environment. They started to make pillows stuffed with the plastic bag scraps. The pillows are then hooked to the mats so it can be rolled into one.

Thompson said this a project anyone can do and speaks to the passions of different people. One of the biggest contributors is a 90-year-old woman who cuts the bags into loops from the comfort of her living room watching TV. When she ran out of grocery bags, she turned to bread bags because she was so dedicated.

Reaching out
Thompson and Becker reached out to area law enforcement to offer the sleeping mats for homeless and transient populations. According to a 2015 report from the Institute for Community Alliances, more than 12,900 people were considered homeless in Iowa and sought assistance from emergency shelters, transitional housing, rapid rehousing or street outreach projects.

Becker approached the Decorah Police Department to see if they could use the mats for any homeless people in the area. The chief said he wants to always have two on hand from April through October. Thompson is also reaching out to sheriff’s departments and local police departments in Waterloo, Cedar Falls and other urban areas.

Even though the need for mats is during the spring through fall, Thompson said this is the kind of project volunteers can do year-round.

“With the backpacks we wouldn’t meet in the summer since kids were out of school,” said Thompson. “I would be very surprised if they would stop anytime, these people don’t want to quit!”