From Exile to Hope: Culture and hospitality matter 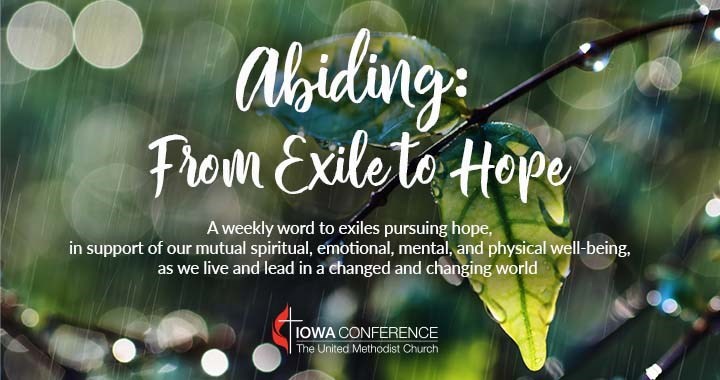 I got a new toy for Christmas: The Wok: Recipes and Techniques by J. Kenji Lopez-Alt. This cookbook is great! It has recipes from all across the Asian world: various regions of China, South Korea, Thailand, and so many other countries that I had to google when I read the recipe. This new toy pushed me to spend a Saturday afternoon exploring the various Asian groceries in the greater Des Moines area.

These various cooking styles are just so delightfully weird. Weird to me, I mean. I’ve never had much exposure to real Asian food. I grew up in a small town in South Dakota.[i] We had one Chinese food restaurant. It was run by a family from Singapore, and it served Americanized Korean food. I was probably in college before I realized those were three very different things. To me, this whole new world of fish sauce, oyster sauce, squid sauce, shrimp paste, and various types of dried mushrooms seemed weird and exciting. I picked up some “black fungus” that in no way resembles a mushroom as we Midwesterners would identify it. After reconstituting it in some broth, it was a slimy clam-looking thing, more akin to the fungus we find on dead branches rather than the button mushrooms we’re used to. Slimy, savory, great, weird!

Objectively though, there is nothing weird about this kind of food. Painting in broad strokes, the continent of Asia holds over half the world’s population (4.6 billion people). Granted, what is common in one region might seem very odd in another, but most of them eat less meat, more fish, and different vegetables, and would look at our lack of spices as bland and boring.

Regional/cultural food is the result of available resources. In Iowa we have vast plains of fertile soil and grazing space, so we get to have copious amounts of high-yield crops like corn to go with our meat at every meal. Coastal regions will utilize more fish. Growing up in a landlocked state, I (and most of the people I know) never had the opportunity to gain an appreciation for fish. As cultures grow, they build rituals around the food they eat. Biblically, we see the Passover lamb being served rather than the Passover prime rib because beef was not as readily available. In early American history, we celebrated Thanksgiving by feasting on turkey, because that’s what was available.

Even though this food culture is natural and inevitable, it can be a bad thing. Food culture sets up firm and observable boundaries for the in-group/out-group dynamic. Just ask anybody who doesn’t like turkey, stuffing, or mashed potatoes on Thanksgiving. I guarantee they hear “WHAT DO YOU MEAN YOU DON’T LIKE <FOOD>?!?!” every year. To a much lesser degree, as a South Dakotan, I will never understand what you Iowans see in the “ham ball.” This divide widens quite a bit when you jump to a fundamentally different diet. It pushes people out of our community and reinforces the belief that they are different and unwelcome. It may seem like a minor thing to us on the inside, but it’s important enough to be addressed in the Bible.

The quickest way to hospitality is through the stomach

He saw heaven opened and something like a large sheet being let down to earth by its four corners. It contained all kinds of four-footed animals, as well as reptiles and birds. Then a voice told him, “Get up, Peter. Kill and eat.”  “Surely not, Lord!” Peter replied. “I have never eaten anything impure or unclean.” The voice spoke to him a second time, “Do not call anything impure that God has made clean.” This happened three times, and immediately the sheet was taken back to heaven. – Acts 10:11-16

I love this scene in Acts. You can almost hear Peter clutching his pearls from two thousand years ago gasping “Why I never!” The issue of drawing boundaries based on diet is a big deal in the New Testament. In Galatians, Paul calls out Peter for not eating with the Gentiles and only hanging out with his Jewish buddies. God calls out Peter three times in this part of Acts. That takes some chutzpa to argue with a vision from God, doesn’t it?

The truth is humanity, ALL of humanity, bonds over shared meals. It is a cultural universal. In its time, God established the food laws for his people to keep them safe and sustain them, but when it came time to share the faith with the rest of the world, those laws became a hindrance to evangelism. So we ditched them. Or we are supposed to have ditched them.

Often, we get confused about who is to bear the burdens of hospitality. We say, “Everyone is welcome in our church,” but we really mean “You can come if you like how we do things.” We put the burden of change on any who would join us. They can come to our home, but in the end, it is still our home. They must become like us if they want to abide with us.

That’s not what God told Peter to do!

Hospitality is making others feel like they are in their home, not a tourist in yours. God told Peter to go and change the way he ate, not just welcome the gentiles to his table, but go and be fully present with the gentiles in their element. Peter does just that when he goes to Cornelius’s household.

The most powerful experience of hospitality I’ve ever had was on Thanksgiving Day 2006. I was a manager at Target in Cheyenne, Wyoming. I had to close the day before Thanksgiving and had to be back at 4 am the day after Thanksgiving, so logistically, it didn’t make sense for me to go back to South Dakota to be with my family. My best friend and roommate at the time insisted that I join him at his grandparents’ house for the meal. My friend’s grandparents were Mexican immigrants. Their Thanksgiving trimmings were recognizable but definitely different than what I was used to. There was turkey, but the sides were all traditional Mexican cuisine, except for one side that is. Since my friend’s Abuela heard I was coming, she made mashed potatoes just for me. There was no gravy to go with it, so I covered them with green chili which was awesome. It was a small gesture, but it went a long way in making an awkward white kid feel at home with a loving Mexican family.

We don’t often see it, but Iowa is becoming more diverse. In the past ten years, the population of Asian and Pacific Islanders in Iowa has more than doubled[ii]. Immigration and resettlement account for a small part of this population boom; most of it comes from children being born. Most of us will never know the struggle of starting a family in a foreign culture.

Consider daycare for a moment. There is a massive lack of quality daycare in Iowa right now for everyone but imagine how hard it would be to find a daycare that would fit a different cultural need. One where your children could be brought up learning the skills they need to thrive in your new community while still immersing them in the culture, language, and food(!) that they have at home. For most immigrant communities, these daycares don’t exist. This forces one parent, almost always the mother, to remove themselves from the workforce to care for the children and denies the children the massive benefits of a quality preschool education.[iii] As a result, Asian households are twice as likely to be below the poverty line compared to the rest of Iowa. The only other viable alternative right now is for these families to send their kids off to mainstream care centers, where they could slowly lose their connection to their roots. Making space for families to be who they are matters.

Again, this is biblical. The Babylonians sent the Israelites into exile as a gentle form of genocide. They didn’t want to kill them all, they just wanted their people, culture, and religion consumed by the rest of their empire. This existential identity crisis permeates the entire Hebrew Bible, making the commandment to extend hospitality the most common commandment, and the one that holds the most extreme punishments when it is abandoned. The “cultural melting pot” mentality is the antithesis of God’s hospitality. God’s people grew up as strangers in a strange land, so it is our duty to always make the stranger feel at home.

What can we do?

It is a glorious thing when possibilities are realized. There are a growing number of bi-lingual/multi-cultural daycare centers popping up in Iowa. The first daycare center we ever took our daughter to was Mundo Pequeño, in Des Moines. Lily absolutely loved it! More importantly to me, they loved her! She was welcomed and immersed in different cultures. I realized that my Spanish skills were on par with that of an immersed three-year-old. I need to work on that. So we can make opportunities for these families to thrive!

Beyond that, as a community of faith, we need to support the diversity we find in our communities and stand against expressions of racism and xenophobia. Last year, Iowa got national attention for some less-than-stellar reasons. A woman ordered a meal from Pho Real Kitchen and Bar. Pho is a traditional Vietnamese noodle soup.  It’s pho-ntastic![iv] Pho is made by pouring the boiling broth over raw ingredients, including meat, and letting the hot liquid lightly poach the contents of the soup. This woman had her meal delivered, so the restaurant sent the contents of the meal in separate sealed containers so the customer could have the freshest meal possible.  Rather than familiarizing herself with the process and being grateful for the detail, she took to social media and called the restaurant staff “lazy” and “against health code.” That wasn’t just ignorant, it was cruel. Since reading that article I’ve made it a point to order from Pho Real once a month, and my life is measurably better for it!

These subtle forms of racism and racial bias happen all the time. I do it too!  Referring to Asian cooking ingredients as “delightfully weird” may not sound as offensive as what was directed at Pho Real, but it still alienates the people I’m talking about. This doesn’t even have to be an ethnic cultural thing. Just look at the response to Cracker Barrel including a plant-based protein option to their menu. It’s just an option! But man, people got mad.

As people of faith, we need to remember Peter’s vision. It is not our job to judge people on what they eat, or what culture they come from. It is our job to make them feel at home, truly welcomed in God’s community. I look forward to the day when Iowa churches host noodle dinners and serve japchae, hor fun, or vermicelli rather than egg noodles.

[i] To be fair, “small town” paired with “South Dakota” is fairly redundant.
[ii] https://monsooniowa.org/asians-in-iowa/
[iii] https://learningpolicyinstitute.org/press-release/what-does-research-really-say-about-preschool-effectiveness#:~:text=Students%20who%20attend%20preschool%20programs,early%20literacy%20and%20mathematics%20skills.
[iv] That was the least objectional pho-based pun I could come up with.