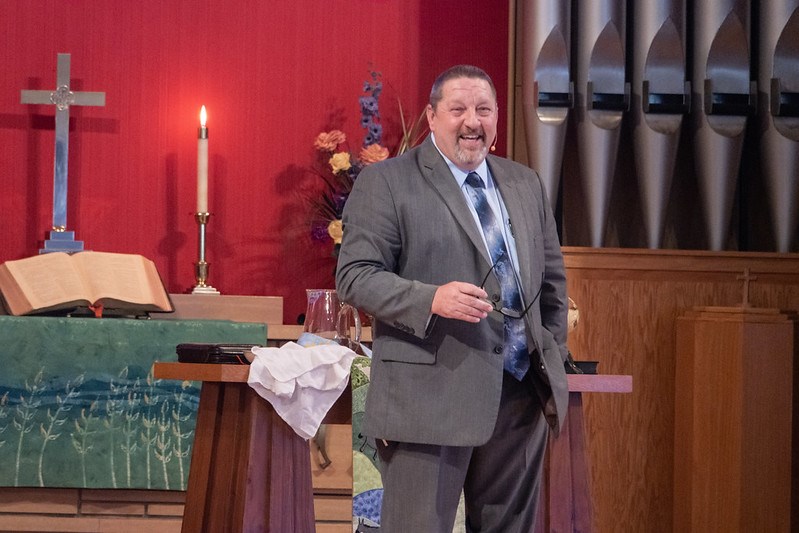 December 06, 2019
share
“The Southeast district is an enormous stretch of geography filled with wonderful churches and effective pastors—and I’m getting to know them better and better as the days go by,” says Rev. Doug Cue, who began his appointment as Superintendent of the Southeast District this summer.

In this new job, which is both as a missional strategist and a kind of pastor of pastors, Rev. Cue is currently focused on relationship-building, which he views as one of his primary gifts. Through discussions and information gathering, he is looking to discern opportunities and possibilities in local settings, as well as mediating any conflict areas.

Leaving the farm and making disciples
Having grown up in western Iowa, Rev. Cue thinks of himself as a farm kid. “The adage is true, you can take the kid out of the farm, but you can’t take the farm out of the kid,” he states, describing himself as a pretty straightforward guy. “If I had to define myself in a brief synopsis it would be authentic, upfront, and trying to bring the best gifts and graces possible in order to build the kingdom of God and make disciples for Jesus Christ,” he says.

A sign of his farming background hangs over Rev. Cue’s desk in the form of displays of his father’s and grandfather’s tools, which help him to remember where he comes from. “It’s a reminder of that, but also the tools I have for ministry were generated in those relationships I had as a child, and specifically with my dad. Just the general nature of building and constructing relates so easily to kingdom building, developing relationships, changing the world, and building disciples, so they are a visceral, visual reminder.”

A pastoral career
During his career as a pastor, Rev. Cue and his wife Jodie have moved all around Iowa, for both short and long-term positions. He had an unusually long tenure at Sharon Center, and says, “We were there 15 years (which is several lifetimes for a UM pastor) and saw the incredible benefits of being there for that long of a term—the drawbacks as well. After such a period of time, if you don’t keep reinventing yourself, you tend to diminish your abilities.”

To help that reinvention, he next took on an intentional interim role at Missouri Valley-Mondale. The position also had the advantage of putting him close to his father, who had colon cancer at the time. “It gave me two years to be closer to him, to process some things, and do some work with my dad that we may have not had the opportunity to do had we not been that close geographically,” Rev. Cue explains.

Anointed into his new role
Bishop Laurie Haller recently oversaw a beautiful welcoming celebration for Rev. Cue in his new position as a district superintendent, which also included an anointing. “Bishop Laurie is just delightful,” enthuses the reverend, who felt overwhelmed with emotion during the service, but also felt the sense of responsibility that came with it. “What a wonderful day. I was blessed by her being able to preside at that, and the folks that attended, and God love Mt. Pleasant UMC for hosting us.”

John Wayne no more
Although he values his new role, there has been an adjustment to the transition from pastoring to a more administrative role. “I grieved the loss of a worshipping congregational community,” admits Rev. Cue, explaining that he wondered where he would see God in his midst without that visible representation of a congregation.

“I’ve come to find that now in the covenant of the cabinet,” he reveals. “What I’ve come to find is God being present in the midst of the relationships I’ve built with the folks around the table in the cabinet.” His interactions with both these colleagues and Bishop Laurie have provided emotional, spiritual, and practical support—but accepting this teamwork approach did require a change in thinking for Rev. Cue.

“This is the Southwest Iowa farmer kid in me, but I’ve got a John Wayne complex going on. I like to sit under the tree on my horse all by myself and look at the ranch. And I’ve adjusted to that team concept quicker than I thought I would,” he confesses. “You can’t Lone Ranger this stuff. I tended to do that when I was over-functioning in local churches. But it would not be a wise thing to do as a District Superintendent!”
See more images from the Installment Ceremony of Rev. Doug Cue.