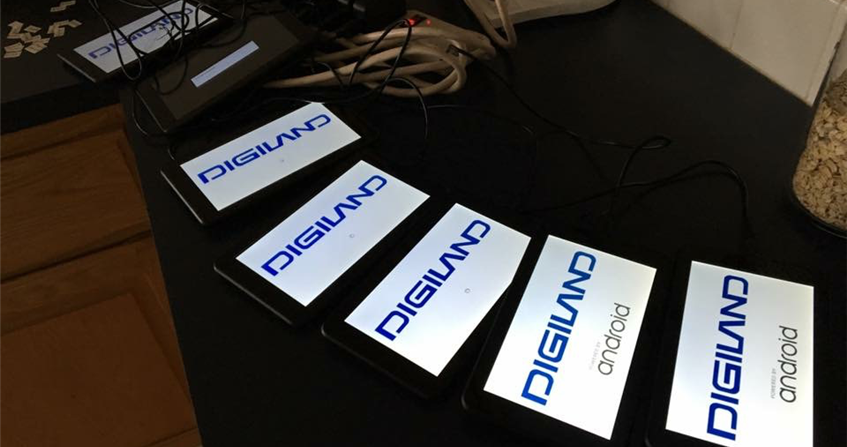 May 07, 2016
share
“We wanted to make sure our local host teams were able to give people the answer right off the bat when they had a question – and that also means talking to them in a different language,” says Greg Nelson, Director of Communications for the Oregon-Idaho Conference, discussing how volunteer teams at the General Conference, beginning in Portland on May 10, will be greeting and directing thousands of attendees from around the globe.

“One of the things about General Conference, because it happens every four years, there’s always a new wave of technology,” explains Nelson. “So without too much expense, we were able to set up some Android tablets that each of our hotel stations will have, each of our information booths will have, and the team out at the airport has. By using open source products like Google Translate, we’re able to put tools in people’s hands that can help them do their job and answer questions for people.”

Click here to listen to the conversation with Greg Nelson

Although Nelson says just using certain universal hand gestures can be enough to help assist some visitors who speak different languages, the Google Translate app is helpful when better communication is needed. “You can just speak into the iPad, or if you have it on your phone you can speak right into it. You tell it what language, and it will translate it back. Then you can even tap that and it will speak it for you. Or you can then hold the phone so that other people can read what was put there,” he says.

They were fortunate to have been able to get the tablets that the volunteer teams are using at a great price. “We found at Best Buy, on sale, a $39 tablet that would do the basic job of what we needed to do. So I ran around to every Best Buy in the Greater Portland/Salem area, and after I bought all of them out, I then went online and they wouldn’t let me buy enough, so I had to establish a business account. Anyway, we ended up buying 32 of these tablets for $40 bucks each. And I’ve been sitting each evening working on a few at home, cloning them and setting up the desktops with a basic set of tools.”

Those tools include things like Google Maps for directions, Zomato for restaurant recommendations, Portland Art Trekker for finding local art, and Yelp for finding just about everything else. A TriMet/MAX Line app makes it possible to know when the next train is coming and how to get where you want to go via public transportation. “There’s a whole set of apps that we have made available. I was out at the airport and I noticed that the team there had already added a flight stats app, so they could check on the flights that were delayed.” 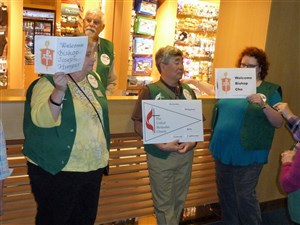 At the convention center, the technology will continue to play a role. “Instead of having one information booth, where people might come to ask questions, we’re going to have six mobile information booths that will be set up as a little cart with a flag going up that says ‘Have questions?’ They’ll have a supply of handouts and things for people, but they’ll also have these mobile tools to help them answer questions for folks about where they can go and what they can do.”

Nelson points out, “It used to be that an information desk would have a notebook that’s filled with menus and maps and directions and suggestions and lists of phone numbers. Instead, we said, ‘How can we do that without having to print all that stuff and have a notebook?’ Now we do have some notebooks with information like that, but we’ve also said, you know a lot of it’s just online, and we can make use of all these tools that are out there, because that’s what people are using anyway, and we’ve tried to leverage that.”

“We’ve done the same thing with our training,” he adds. “We have a web page for our teams to train on, and we’ve told all our volunteers please go watch this video online before you come, and that gets their first step of their training.” That bit of ‘online training’ lets volunteers know where to meet, what to expect, and other guidelines. “So we can give them that even before they get in the door, and then give them a short, on-site training and disperse them to their work areas for a final training.” 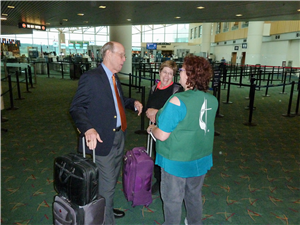 It takes a lot of volunteer support to help with an event as big as the General Conference. “We have over 620 people scheduled to work volunteer shifts, and the number of shifts is in the thousands,” Nelson reveals. “We’ve drawn from not only all of the state, but all of our episcopal area, including Pacific Northwest and Alaska. We’ve also drawn from the entire Western jurisdiction, in terms of inviting people to come and be volunteers. But we’ve also gotten people from all over the country and the world.”

“We think we’re ready for people to arrive, but there’s always more you wish you could do,” acknowledges Nelson. “You have dreams about what you could do to really offer extravagant hospitality, and you try to plan for that. But then reality strikes at some point, and when the event comes, the event is gonna come, and we continue to work with things as they are.”

Well, with the help of volunteers armed with tablets and informative apps, it sounds like everyone visiting the General Conference is in good hands!