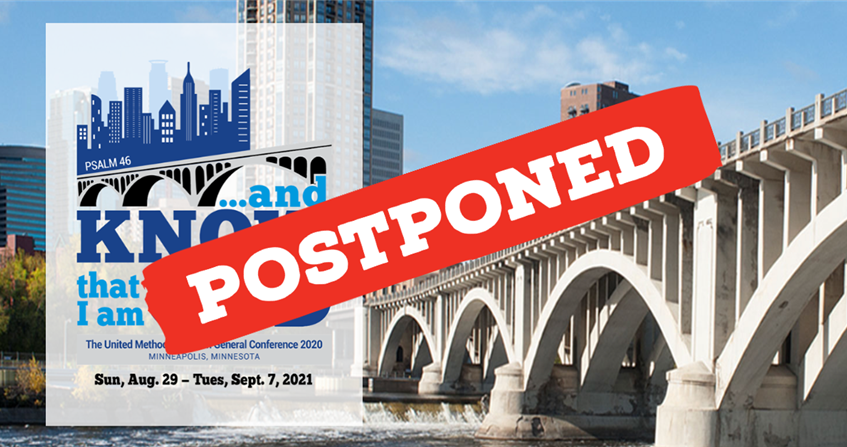 Commission on the General Conference

Meeting on February 20, the Commission on the General Conference made a decision to further postpone the 2020 General Conference until August 29 – September 6, 2022 in Minneapolis, Minn. as the COVID-19 pandemic continues to affect the safety of mass gatherings and travel.

In making the decision, the Commission determined that it was not feasible to safely hold an in-person meeting involving all delegates as currently scheduled for August 29 - September 7, 2021 due to a number of barriers:

•    The number of COVID cases continues to rise, with nearly 2.49 million confirmed cases the week of February 15.
•    Vaccine is not expected to be widely available this year in many countries, and new variants of the virus which may be resistant to vaccines are emerging globally.
•    International travelers to the U.S. must show proof of negative COVID-19 test results no more than three days prior to travel, but in many places, testing is not readily available or provided free of charge.
•    Visa services remain limited in some areas.

There also remains the possibility that a temporary six-month visa bond program which requires bonds of $5,000 - $15,000 per person for residents of some countries could cost up to $2.5 million in bonds for affected delegates if the program should be extended beyond June.

The Commission’s decision was informed by the report of the Technology Study Team appointed to explore the implications of options for accommodating full participation at General Conference, including but not limited to the possibility of utilizing technology and online voting, in considering whether the meeting should be held virtually.

According to their report, “The study team considered a number of challenges and implications, including how to keep participants safe, providing for global participation, safeguarding the integrity of the voting and credentialing process, and meeting legal requirements …”

The Technology Study Team analyzed a variety of options, including an entirely electronic General Conference with participation from individual locations; an entirely electronic General Conference with delegates gathering at regional satellite hubs; and two sessions, with the first part being electronic and the second part in-person when it is safe to convene. None of these options were determined by the study team to be viable.

The study team did find that a more traditional method—utilizing mail ballots to vote on emergency actions—could help The United Methodist Church to address important, urgent matters through the General Conference. Their report recommended utilizing mail ballots for making a limited number of “Emergency Interim Actions” on which the General Conference delegates would indicate a yes or no vote for each item.

“The Commission shared the study team’s findings and recommendations with the officers of the Council of Bishops in a collaborative effort to jointly explore how this alternative might be utilized to address critical matters until an in person gathering of delegates can be safely convened next year,” said commission chair Kim Simpson.

Some of the concerns mentioned in the report regarding having a virtual session include:
•    Lack of infrastructure in some areas, including Internet access, Internet speed, and electricity
•    Lack of technology for equitable Holy Conferencing
•    Complexity of the legislative committee process
•    Concerns about accurate credentialing and verification of identity
•    Difficulties in seating reserve delegates properly
•    Security of voting
•    Safety concerns about regional satellite gatherings

Simpson said the August-September dates in 2022 will mean that General Conference will be one day shorter than planned for 2021; however, these dates were the only option available. Simpson said that the Commission regrets the fact that these dates once again conflict with the start of the academic year in the U.S. which a group of young adults had asked the Commission to avoid, but there were no other dates available.

About General Conference
General Conference is the top policy-making body of The United Methodist Church. The assembly meets at the beginning of each quadrennium to consider revisions to church law, as well as adopt resolutions on current moral, social, public policy and economic issues. It also approves plans and budgets for church-wide programs for the next four years.