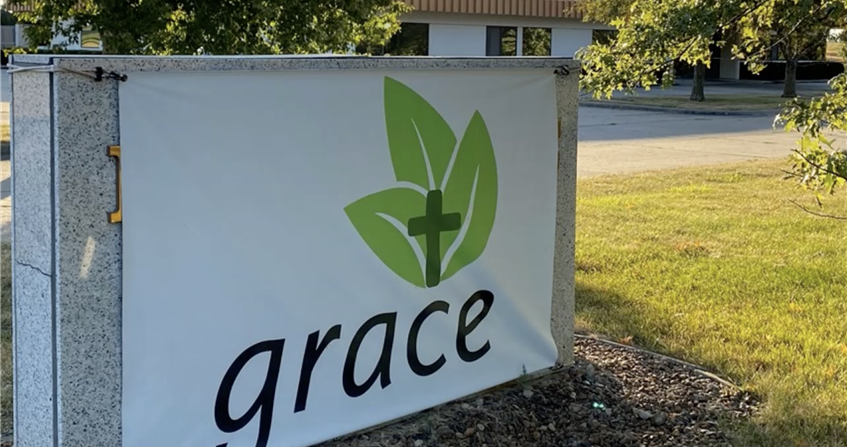 September 12, 2020
share
On August 30, 2020, over 100 people gathered at Grace Fellowship, a United Methodist Congregation for Ottumwa to celebrate the end of their capital campaign, Growing Forward as Grace, and to dedicate their new building by offering a pledge to God and encircling the building with prayer.

“We started the prayer facing towards the building and praying for the ministry God's going to do here in this space and then we had everyone turn around and pray out into the world that Jesus is sending us,” said Rev. Chris Childs, pastor at Grace.

Grace was formed out of a vital merger of three Ottumwa United Methodist churches which began in December 2018. The members of First, Wesley, and Willard Street United Methodist Churches gathered together in a Church Conference where they voted and approved a vital merger proposal that was generated by representatives from each congregation. As directed in the vital merger agreement, the former congregations closed in June of 2019, their property was sold, and their memberships were transferred to Grace. A leadership team was formed and on July 1, 2019, Childs was appointed to serve as the first pastor.

“This has been an adaptive journey for me because Grace is becoming a church different than anything I've ever been a part of,” said Childs. “The process for me was very much one of me trying to come to terms with the idea that this is a new church start. We're leaving all three buildings, all three identities, and we're becoming something new.”

“I am blown away by my congregation, their commitment to set aside personal preferences and to do whatever is necessary to make a difference to the people of Ottumwa. I feel so lucky that I get to be a part of this. Maybe the biblical word is blessed,” said Childs.

Grace wants to be intentional in making sure their church is not about the physical building, even as they begin the design and construction of it.

“The pastors before me did a lot of the hard work of planting seeds of a new way of thinking of what it means to be the church. When I got here, I just needed to water them. I just continued to water them and give those seeds the nourishment they needed to thrive,” said Childs.

Grace would not have happened without the work of the previous pastors, Leila Disburg, Jim Shrimplin, and Jon Disburg, and lay leaders of the previous congregations committed to a mission-driven United Methodist presence in Ottumwa and the drive to reach out to new people.

People have been meeting in small groups in homes, coffee shops, or somewhere in the community. Childs asked each small group to pick a service project that would make a difference in Ottumwa.

One small group adopted the cross-country team. They gave the kids notes of encouragement and snacks in goodie bags as they got on the bus.

“The first week the cross-country kids were like, ‘Who are these crazy people? What are they doing?’ By the end, they were looking forward to it. The small notes of encouragement became a collector's item. Can you catch them all?” said Childs.

Each group was doing something to relationally make a difference in their community. It has become a part of Grace’s DNA and what the church has become known for.

“It's not about the building. The ministries we do in the building are there to send us out into the community where some of the most significant ministry happens. They've already been on that journey to reach new people through their outreach,” said Child’s

“Church” for Grace is in the form of relationships. Small groups are building relationships with people who don't have a church. Even during the COVID-19 pandemic more people are connecting with Grace and worshipping online.

“It was fun at this prayer event to meet new people that I'd never met before. They've been engaging in worship online throughout COVID-19 or attending some of our house churches that are watching the service and praying together. They got to come out to our prayer service to celebrate this next step forward,” said Childs.  Watch the Grace dedication service video.
Childs thinks Fresh Expressions will be a significant part of what Grace looks like in the future. As they engage with new people in the community, they have discovered that one size for worship doesn’t fit all any longer.

“What we're looking at is developing our teams to multiply worship and as we're building relationships with people in the community, we’re asking the question, ‘What would worship look like for you?’” said Childs.