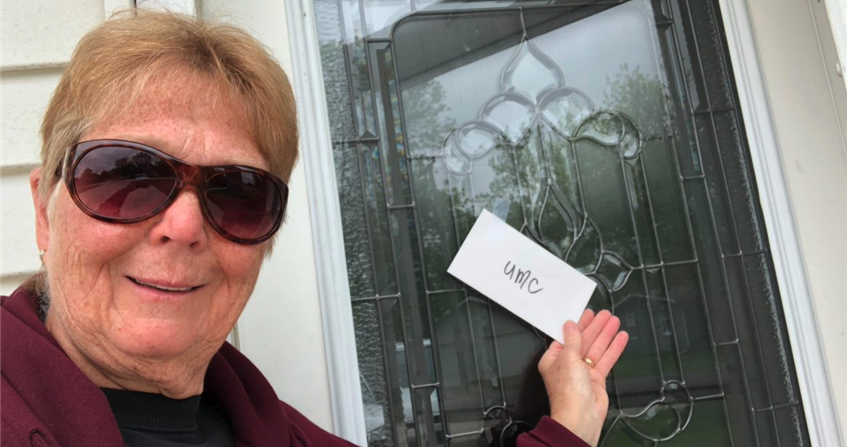 Members of Graettinger United Methodist Church in Northwest Iowa have lived up to the town's motto of "small town, big heart" during the coronavirus pandemic. When Treasurer Denise Tindall came up with an idea to boost the church's weekly giving by going door to door with a "show me the plate" curbside offering, faithful members found it in their hearts to give extra to their small yet beloved church.

"Financially, things have never been fantastic," said Lana Williams, pastor of the dual point charge with the Graettinger and Terril United Methodist churches.

Graettinger is a rural church that's struggled financially for the last five years after some significant patriarchs and matriarchs of the church passed away. Their giving supported the church and, for the most part, has not been replaced.

"I do the weekly bank deposits and when all this hit, I could see that it was going to be devastating to the church, and it just popped into my head, let's just take the plate to them," said Tindall. "I thought when they're not present; they don't give. If we reached out with a curbside offering after Sunday services, we could, bottom line, keep the church going.

Tindall always says that no matter where you are in Graettinger, you could be on the other side of town or back home in two minutes or less. She knows her town well and where everyone lives, so a curbside offering plate was a "no-brainer" way for her to help her church financially.

"It's just part of what I do for the church, and I had to do something to keep myself busy on Sundays. I do my weekly givings, and I make my deposit; otherwise, I'll get into trouble," said Tindall

As a child, Tindall had watched her mother make the church deposits on Sundays. It was her mother's routine, and even though Tindall was absent for 40 years when she moved back, she picked up where her mother left off.

Tindall posted her phone number on the Graettinger/Terril Facebook page during the Sunday services, and people can text or call her to come to their house for the curbside offering.

"And people just rolled with that and gave beyond what their normal giving would be, recognizing that we were at a place where even the normal giving wasn't quite where it was. Some faithful members stepped up and gave a little extra to help us get through that hurdle," said Williams.

"Because of COVID-19, some folks stay inside, and we have a little fellowship on the doorstep with others. It's nice, especially when we were not going to church, to stop and visit with the people you'd normally see every Sunday," said Williams.

"I do have one lady; if she sees me next door picking up, she, on occasion, has run out of her garage and given me a check. I'm not sure if she's even a member of our church, but she does come to this church, so it's always appreciated," said Tindall.

Two years ago, when Graettinger UMC began offering online giving through Vanco, a few started using it, but when they started doing the "Show me the Plate" curbside offerings, people picked up on it immediately.

Now Graettinger worships in-person, and through Facebook Live, so members have both options for church.

"After worship, Denise will go out and pick up gifts from those that still don't feel safe or are not able to come to church, and having a curbside offering as a way to make sure that the church has received their tithe and gift has been a huge, huge blessing," said Williams

Williams said people have been more thoughtful about giving during the pandemic than before. They would have dips in giving during the summer and because of the "Show me the Plate" giving, they didn't have the dips like they usually have had in the past. The summer of 2020 was one of their better years.

"This is a church that is struggling financially, and not being able to have the fundraisers that help us pay our apportionments is really a struggle," said Williams. "But just to pay the bills, to pay the utilities, and all those things that continue, that's where people really stepped up and realized those bills still have to be paid."

Here are a few suggestions for small rural churches that would like to start curbside offerings: "God is really good, and it has been astounding to see God work; even in these crazy and insane times, God is at work," said Williams. "We had talked about going online before and decided not to. And now, to see the response to going online, it's like God is breaking open our doors, and that is exciting. Not how we envisioned it, but it is still good."