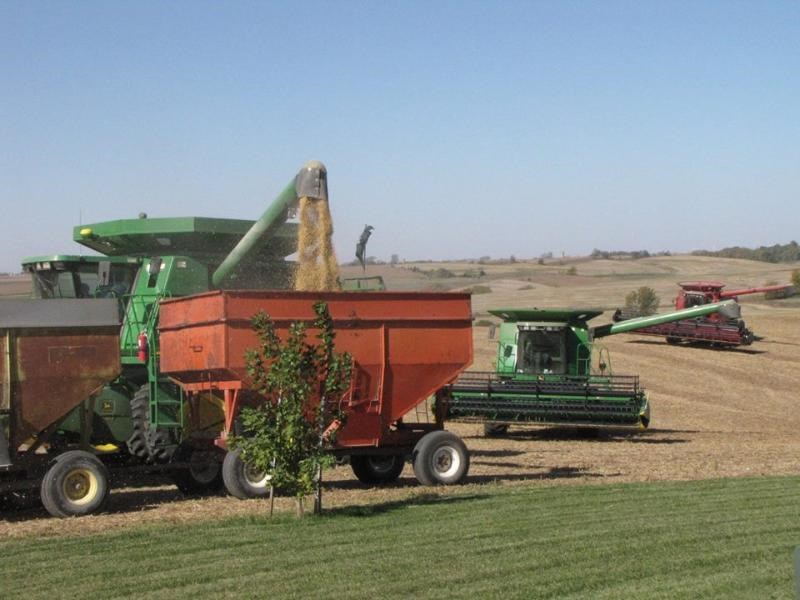 While the Healthy Church Initiative (HCI) has been in place in the Iowa Conference for four-plus years, many congregations were putting elements of the initiative that equips clergy and laity to reach new people into practice prior to its official inception, and sometimes since without having fully implemented the program.

One such church is Greenfield United Methodist Church, with its free health clinic and another ministry called Fields of Faith.

Two church members, nurse practitioner Marvel Blazek and Deb Harlan, an administrative employee of a local hospital, were considering starting a clinic for a while, Rev. Schubert said, and between that and his having completed an independent study course on the United Methodist Church and healthcare while in divinity school, God moved the three toward establishing the clinic.

“I had seen the power of free clinics serving God and people,” Rev. Schubert recalled. “During some conversations with the three of us it became clear we all thought there was a need God was calling us to address.”

After they contacted the volunteer healthcare network Free Clinics of Iowa (FCI), things got going with the clinic, and since then various nurses, aides, and lay people from the church have worked to make the clinic, part of a system serving 86 of Iowa’s 99 counties, work.

The church had started the HCI process earlier prior to Rev. Schubert’s arrival, but did not carry on at first. What happened, he said, was that the free clinic helped engage Marvel and Deb in ways so that they have played a significant part as leaders in HCI now, including reading all of the material and participating in the monthly meetings.

“Instead of HCI leading them to the Free Clinic, the Free Clinic may have led them to HCI,” Rev. Schubert stated. “Which has been a huge blessing to us.”

Greenfield UMC has also taken part in a food pantry since 2003 and sends a group on mission trips each year, but Fields of Faith is one ministry of the church that’s been touching people both locally and internationally with its witness for more than a decade.

Fields of Faith brings several farmers from the Greenfield congregation together with other local farmers and agricultural merchants, to plant, tend and harvest a field of crops, with proceeds benefiting a U.S.-based interdenominational outreach combating hunger in developing nations. Everything is donated locally, from the land, seed, equipment, applications and labor.

Total proceeds of the harvest go to Foods Resource Bank, which works with UMCOR and other international Christian aid agencies to help communities solve systemic hunger issues locally. This is typically done by training and assisting people in their communities in growing their own food. Donor groups can choose which individual Foods Resource projects their proceeds will benefit.

The ministry sprung from what was initially an unlikely source in Greenfield UMC’s Dennis Lundy, who said the Lord had to keep tapping him on the shoulder to get through to him that it was him who should do it.

Lundy had seen an article in the Conrad, Iowa, newspaper on a similar growing project.

“And I thought, what a wonderful idea,” he said. “Somebody should do that.”

Whether finding its way into discussion, or Lundy’s coming across the article again, the idea continually kept coming back to him.

“God was saying ‘You’re going to do this,” Lundy
recalled. “And all this time I was thinking someone else should do it.”

“I felt called by God, I felt this was something God was trying to get me to do,” he said. “I tried everything before realizing it wasn’t supposed to be someone else, it’s supposed to be me.”

“God gave me what I have,” Lundy continued. “It (Fields of Faith) fits with my gifts, it fits with the abilities I have.”

So Lundy brought it up to his men’s group and got a positive response, which led to a Foods Resource Bank representative coming to present on the project, and Fields of Faith was set in motion.

Lundy said he wasn’t sure at first how it would work out, but at the start the group went in with faith.

“We said, ‘We don’t care if nobody else wants to be involved,” he recalled. “We’re still going to do it.”

The ministry has raised an average of $30-$40,000 per year since, some years topping $50,000, Lundy estimating, “I believe we’ve donated over a half-million dollars since we started.”

Fields of Faith was the subject of a December 2014 segment of Iowa Public Television’s Market to Market program and also profiled in The Iowa Soybean Review’s “Iowa Farmers Giving Back” issue the year prior.

Each year Lundy donates 60-70 acres of land he farms to the Fields of Faith crop, the crop varying, usually corn or soybeans. The proceeds vary with the ups and downs of farm commodities, something Foods Resource Bank plans for in its programming.

Roughly two dozen-plus people overall are involved locally in making the project happen, each taking part in their own way throughout the planting, growing and harvesting process.

“It’s something that fits with our gifts,” Lundy said.

With all of the support and involvement in Fields of Faith, the process has become fine-tuned over the years.

“It’s gotten easier as time goes on,” he stated, “and people want to be involved.”

It’s a real community effort, and Lundy said there is always hope that someone will be touched by Christ, regardless if they are on the giving or receiving end, or whether or not they go to church; everyone has something to give.

Some of those involved in Fields of Faith attend Greenfield UMC, some come from other churches, but some don’t attend church and nonetheless want to be part of ministering to others’ needs.

“People you wouldn’t think would be involved, they’re the ones that say, ‘Let me know when you’re going to do this, I want to be there,” Lundy said.

Rev. Schubert concurred, saying there’s something for everyone who wants to be involved, and people always saying they’re more than happy to help.

His primary involvement as pastor is praying over the project with volunteers at planting and harvest time, and being there for the annual thank-you supper with Foods Resource Bank, though the ministry has helped him meet people in the community he wouldn’t otherwise get the chance to meet.

Further, having seen and prayed with everyone involved, he knows the project is in good hands and confidently lets it work through the group.

“This is their deal,” Rev. Schubert said. “And they run it very well.”

Something else interesting he said, is the fact that each year, the Fields of Faith field yield is better than any of Lundy’s other fields.

“It’s really cool,” he said. “It’s about three bushels per acre more than anything else.”

While the annual donation figures are impressive, the lives affected by those dollars tell the real story.

Greenfield UMC has been visited by people brought in by Foods Resource Bank to speak about what the program has done to transform their community. The guests give a presentation as part of a moving worship service, with translators helping to convey their stories for church members.

“Everybody just loved it,” Rev. Schubert said. “It has been a blessing.”

Lundy said having beneficiaries tell firsthand what Fields of Faith has meant is a great experience.

“They came into our church, did a church service and a program, and told what it’s like for them in their country and what the money did for them,” said Lundy. “They’re very thankful for what we’ve been able to help them do.”

“Putting people’s faces to what you are doing,” Lundy continued, “makes it real.”

One member of Greenfield UMC who’s gotten an even closer look into those faces is Wendell Zimmerman, a retired farmer and pastor who volunteers for Fields of Faith and who traveled to Honduras and Guatemala in the last several years, interacting with people benefiting from Foods Resource Bank initiatives.

“It’s renewed my faith in what we’re doing,” Zimmerman said. “I wish we could do more in a way.”

People in the communities where the Foods Resource Bank program serves wouldn’t otherwise have the chance to improve their situations, he said, and the ones who have want more training because they see the results right away. They also want to show what they’ve learned and express their gratitude.

“That was really important for them to do that,” said Zimmerman. “That gave them a sense of pride to do
that.”

“These are people in very rough circumstances of life,” he continued. “Foods Resource Bank’s program develops their self-esteem to be able to move forward with their lives.”

He is quick to mention that material poverty in no way means spiritual poverty.

“Those people work a lot harder, make a lot less, and they don’t consider themselves poor,” Zimmerman said.

Lundy said he was affected by his faith before undertaking Fields of Faith, but since becoming involved in the project he’s learned firsthand who is calling the shots.

Fields of Faith Project is a Blessing

“It’s helped me to realize more that God’s in charge,” he stated. “As long as we don’t try to take over, it’ll work out.”

Rev. Schubert has seen how members of his congregation and others taking part in Fields of Faith have been brought along in their faith through the experience.

“The people who are involved, it’s having been part of it that’s helped them grow in really cool ways,” Rev. Schubert said. “They are engaged in the kingdom.”

Whether it’s reaching people many miles away with assistance or engaging a neighbor in the process, the Fields of Faith project has been a blessing to the church and wider community.

“It certainly has given them a path to talk about God in ways that normally wouldn’t be there,” he continued. “They’re able to be a witness in ways that otherwise would not be there.”