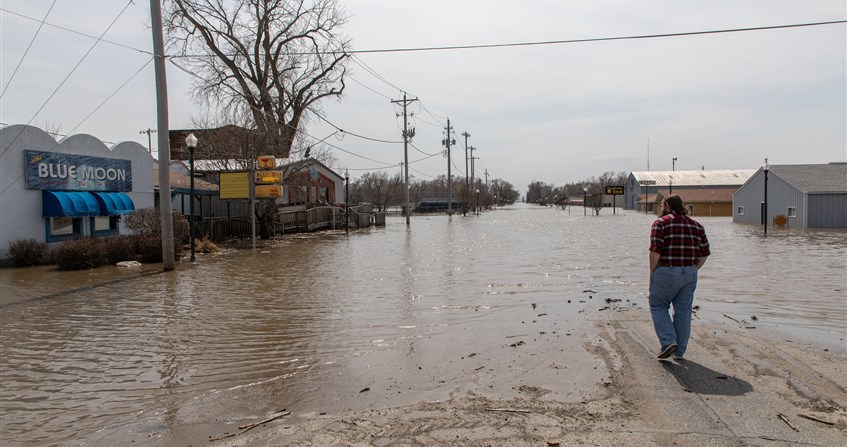 Virginia Lynn, 93, has lived in Hamburg, Iowa, her entire life and not once experienced the floodwaters that have hit the town. Until now.

Lynn moved to the Park Washington Plaza apartments in July from the home she raised her family in after her husband passed away last January.

“I kept telling everybody I was so blessed because after I lost my husband my kids took me to visit, I sold my house and then I moved,” she said. “It’s just mind-boggling to me. I have literally lost everything. It’s just hard to understand how much I have lost.”

The low-rent apartments housed several elderly residents who were evacuated at 4 ‘o clock in the morning the day the floodwaters began to rise. Many only escaped with the clothes on their backs and were left to wonder what had become of their homes.

A flagpole stands in the middle of Main Street near the apartments are located. Residents of Hamburg say that the water has never made it past that point. This year was different.

“The water was rising an inch every 15 minutes when it was coming in,” said Pastor Luke Fillmore, who serves United Methodist churches in both Hamburg and Shenandoah. “They put a berm up trying to stop it. It came crazy fast and it just flowed over.” 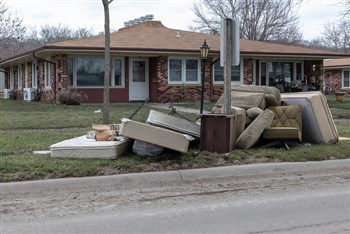 A response crew helped Lynn walk through her mud-filled apartment and showed her what could and couldn’t be saved. She lost important papers, her entire billfold with her drivers’ license, and her Bible that she always kept close to her.

“I had my “Mornings with Jesus”, “Upper Room”, and my Bible on an end table, and of course it’s gone,” Lynn said. “The Bible was just corroded with mud, so now I’m going to start over with a new one. It's not going to be any different. It’s still going to have the same words in it.”

How to help flood relief efforts

Lynn is thankful for her church family and for Pastor Fillmore, who has only been her pastor for seven months. Now, he’s working on building “social capital” in his new communities.

“There’s a lot of trust I’ve already built and a lot of trust being built, but it’s taken a lot of humility to step back and say ‘I can only do what’s been put in front of me,’” Fillmore said. “God has only given me so much to do, and the rest of it I have to trust is being taken care of both physically and spiritually.”

View photos of the flooding impact in Hamburg, Iowa

Members of both churches have stepped up and begun helping others that have been affected. A group got together and helped serve meals for the community in the elementary school cafeteria, including Lana Brandt, Deb Robinson, and Judy Holliman.

The three have known each other since they were children, and are now leaning into what they were taught by a former pastor’s wife.

“This is our community and our town and our home," Brandt said. "She taught us that we are our brother's keepers, and I think that's what we're doing without thinking about it."

Newlon has been farming for about 45 years in the area, and he and his son farm about 3,400 acres together with two hired hands. Newlon was able to get his machinery to higher ground, but some of his buildings were not as lucky.

“We got hit pretty hard with the water so far,” he said. “My shop was near a break (in the levee) and I can’t even get to it right now because there’s too much water around it.”

Carla and Jim Nahkunst are church members in Hamburg who also farm near the town.

"As of right now, about eighty percent of the ground we farm is underwater, but we're blessed because we live up on the bluff so our house, our buildings, our shop are high and dry," Jim said.

Carla added that they were also lucky to not lose any cattle, but about 100 bales of grass and corn stalks floated down the river during the flooding. 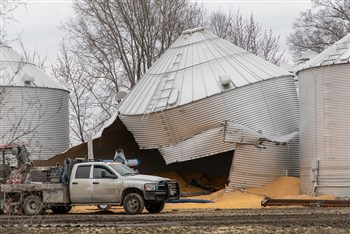 “It’s kind of amazing how much power water has,” Greg Warden said. “You can’t imagine. Someone can tell you, but you just can’t picture it.”

Warden is a church member in Hamburg and works in the agricultural business selling chemical, seed and fertilizer to area farmers. He and coworkers tried to get as much product either out or high up on pallets, but they did not expect the water to get to the roof of their building.

He’s worried about how the flooding will continue to affect farmers this spring. If the farmers can’t get into muddy or water-filled fields to get a crop in the ground, he won’t be selling his products.

"Probably going to be a lot of acres that won't get planted this spring, and that's a lot of our business," he said.

Gary Barrett, a longtime church member in Hamburg, remembers several of the floods that have hit the town and knows that this is in God's hands.

"I believe the good Lord's with us," he said. "If we don't have that hope and don't have that faith what's the use? I trust in the Lord and I think we'll get through it."

That hope has been found in the people who have continued to step up to help in the community. 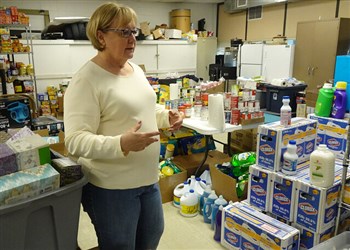 Judy Crain, the recently retired Fremont County Treasurer, has been working 12-hour days with several others in the community to organize the donations that have flowed in faster than the flood waters.

“We have been receiving pick-up loads from Texas, Oklahoma, South Carolina, Pennsylvania, Ohio, all over — we're even getting Amazon packages in the mail," she said.

She works in the small music room in the Hamburg Elementary School to sort soap, toothbrushes, canned goods and other items. They have stopped accepting clothing donations and have begun taking items to other locations in Fremont County so more people can access them.

"Our mission to reach out is why we're here," Newlon said of the work being done. "I think that's what we're called to do as United Methodists."

While the future is uncertain for many residents in Hamburg, Virginia Lynn doesn’t plan on going anywhere else.

“God provides and God will give me the strength to carry on,” she said.