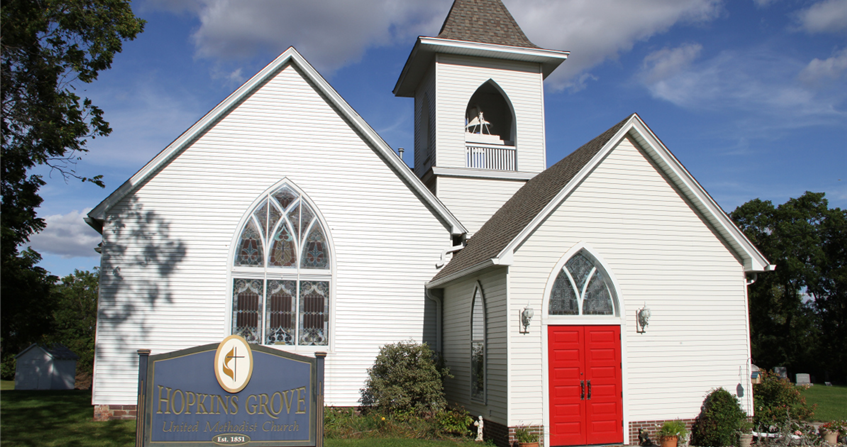 February 08, 2017
share
Hopkins Grove United Methodist Church is a small Iowa church, tucked away in rural Madrid. It sits off the beaten path, but drive by it and there’s no mistaking those bright red doors and small rural cemetery. Despite its rural location, Hopkins Grove has a long history of helping its community and perseverance through times of hardship and plenty.

“It’s got a rich history with it's ups and downs,” said Pastor Craig Ferguson. “The church has given all sorts of things that are community oriented.”

Ferguson started his charge with Hopkins Grove in February 2015. When he first started, Hopkins Grove has been without a dedicated pastor for a while. The lack of minister made it difficult to know what was going on week to week. Because of the lack of leadership, the weekly church attendance took a hit, with only 15 to 20 congregants.

“When people don’t have continuity and feel like they’re not getting anything out of the service, then they leave,” said long-time member DeAnn Hebert. “And when people leave, they tend to not return.”

According to Hebert, the church had gone through 13 or 14 different ministers over the past 30 years. She said most of the pastors coming through were either those fresh out of seminary and just starting out or pastors who were nearing retirement. Since Ferguson has been there, though, the church is on the upswing.

“I think (Ferguson) laid a good foundation,” said Hebert. “We just need to continue what he’s put down.”

When Ferguson arrived, one of the first things he did was sit down with church members and prioritize and vision what the future of Hopkins Groves looks like. Helping put a concrete plan into place really helped church members focus their resources and talents. Church member Mary Swalla-Holmes said Ferguson helped bring organization to a well-meaning church.

“Way back when this church was just beginning, someone said about it, ‘They were the best class of people, but wholly unorganized,’” she said. “That’s still us today.”

Within Ferguson’s first year, church members were able to redo parking posts, put $5,000 into a Noah’s Ark playground, hosted a worship service on the High Trestle trail, spearhead a meal program for children during the summer, hold confirmation classes and double the weekly Sunday attendance. Recently, two TV screens were also installed in the sanctuary.

Ferguson said he doesn’t believe any one church is beyond the point of resurrection. Churches going through rough times shouldn’t just focus on how it’s going to survive. Churches should focus on its purpose in its community and in the world, which is what Hopkins Grove has done.

“If a stagnant church is re-energized and grasps its purpose for being there by answering the ‘why’ question, I think they’ve already started their resurrection,” he said. “Now, it’s just a matter of how they’re going to serve their communities and proclaim the message of light and life.”

Since Hopkins Grove was first established 166 years ago, the church has committed itself to serve the surrounding community despite its ups and downs. Josiah Hopkins donated a plot of land a few miles south of where the church stands today. Hopkins and the settlers built a log building that not only served as the church, but also as a school house until late in the 20th Century.

Later on, Hopkins built the 20 Mile House, a carriage house and supply store for people traveling between Des Moines and Madrid. The 20 Mile House eventually served more than just weary Iowa travelers. Hopkins was a staunch Abolitionist and he the other Hopkins Grove congregants opened the doors of the 20 Mile House to slaves escaping to the North. Eventually, Hopkins and several other church members marched South during the Civil War, many giving up their lives. Hopkins survived and continued helping others until he and his family left.

As time went on, the church went through cycles of decline and revival, but through it all, the community’s well-being was always in focus. More recently, Hebert helped create a Vacation Bible School that all children from Madrid could participate in.

When Hebert joined the church 30 years ago, she and her husband still drove to Des Moines for church service every Sunday with their children. She remembered the times she spent in the summer at vacation Bible school and wanted the same for her children.

“I thought it was important for the kids to have Bible school,” she said. “But I didn’t want to drive down to Des Moines everyday for a week.”

Hebert’s solution was to approach the pastor at Hopkins Grove and ask if she was able to start a vacation Bible school herself. The church members thought it was a great idea and agreed to let her use the church.

“Most of the people helping me didn’t go to Hopkins Grove,” she said. “But after VBS, they started attending.”

The Hopkins Grove congregation also looks outside its immediate community to help others. A farmer who once attended Hopkins Grove left a large endowment to the church. Over the course of the trust, the church has given about $40,000 per year in grants, scholarships and other charitable giving.

Church members have also joined Johnston River of Life (Ferguson’s other charge) on mission trips to Honduras and built homes for Habitat for Humanity.

“Even though we’re small, we try to help people in lot of ways all over the world,” said Hebert.

As Hopkins Grove continues to grow, its church members and Ferguson still want to remember its rich history. The current building is the original building constructed after the church moved from the grove Josiah Hopkins donated out to the main road. Family members of current chuch members going several generations back were laid to rest in the plot next to the church.

Some of the events also recall the past. The annual Easter egg hunt is held in the cemetery using real hard-boiled eggs. The church hosts a Heritage festival every year to celebrate the traditions of Hopkins Grove. The church hosts a traditional Christmas service, drawing in people from Des Moines even.

“Growing up, I remember doing the Easter egg hunt with the hard boiled eggs and now I see my grandkids doing the same thing,” said Swalla-Holmes. “It’s a really neat way to connect to our history.”

Yet, Hopkins Grove church members also know it must keep up with the present to continue onto the future. Hopkins Grove Sunday services are blended, mixing more traditional worship with newer praise worship. In addition to more tradition hymns, Ferguson plays the guitar and sings the most current praise songs.

Ferguson knows part of the success and longevity of Hopkins Grove is because of the tight-knit family feeling of the church. Knowing that, Ferguson tried something new when he first arrived. After the benediction, as the congregation sings “God Be With You Till We Meet Again,”  Ferguson asked congregants to stand in a circle outside of the pews hold hands as they sang.

“That’s almost counter culture to what I had been taught as a church planter because that’s so uncomfortable,” he said. “But in this setting, that’s what people are looking for: inclusion and being part of a family.”

The church recently put in two screens in the sanctuary to help services be a little more interactive. Bringing technology into churches and worship can be a challenge for churches and Hopkins Grove was no exception.

“We decided to put screens in and really bring (Hopkins Grove) forward to 2016, but it was a bit of a struggle,” said Swalla-Holmes. “But because of the screens, we’ve seen some new families come in who really appreciate them.”

Swalla-Holmes, Hebert and the Hopkins Grove members understand that to continue to make an impact, they must be willing to embrace what’s new and uncomfortable, but still remember where they came from.

“I think the key thing is balance,” said Swalla-Holmes. “We need to tell the stories and keep the history alive, but also, we shouldn’t dwell in it.”

To learn more about the history of Hopkins Grove visit https://hopkinsgroveumc.wordpress.com/hopkins-grove/history/.