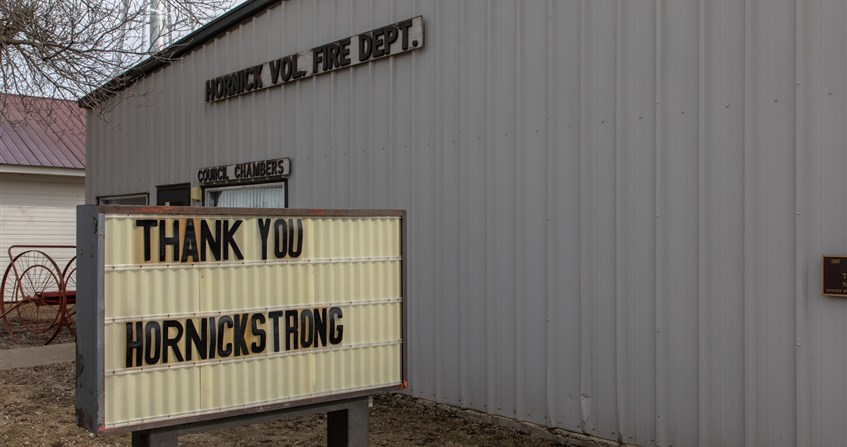 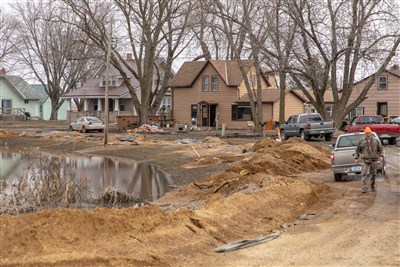 “The water came from the north,” said Pastor Catie Newman. “The fire department tried to build a berm on Thursday night, and at about nine ‘o clock in the evening the levee broke and they could see the water come into town and come over the berm.”

After being given only 10 minutes to evacuate the town, she, her husband John, and the rest of the residents of Hornick, Iowa, were left to wonder what would happen after the last-ditch effort by the fire department was destroyed by water.

“When you don't know what's happened, it is your imagination that gets away with you,” said Newman. “What's it going to look like, how bad it can be, and what am I going to find? I think that’s the hardest thing.” 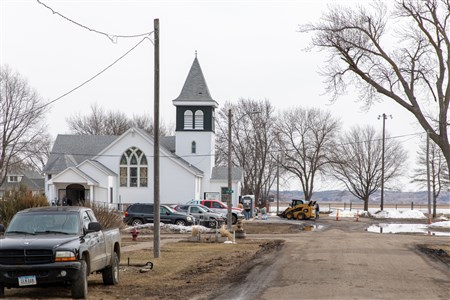 The Hornick United Methodist Church sits about one block away from an empty cornfield but now is more reminiscent of a lakefront. About one mile further is the river, its levee broken and water spilling through the town.

About two-thirds of the homes in the 219-person community have been affected by the flooding and about 100 more people in the rural area around it. This includes the parsonage in Hornick, where Newman lives.

“South and East of the church was the part of town that really got hit the worst with a couple of exceptions,” said Newman. “Some of our oldest homes were built on lower land, and they got really damaged, several of those have water above the living space.”

The United Methodist Church may be the only church in the small town of Hornick, Iowa, but it’s evident that Newman is a large part of the entire community.

As she led Iowa Conference Communicators on a tour to access the damage, she stopped several times to chat with people who had been affected. Many of those she spoke with are not members of the church, but she has worked at making connections in the tight-knit community over 14 years of serving there. 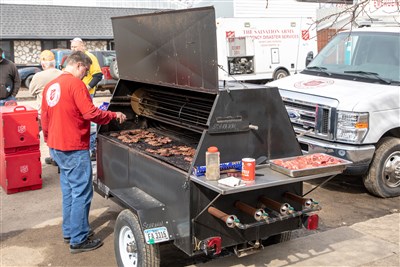 As The Salvation Army handed out free steak-sandwiches with all the fixings, Newman made sure volunteers, the local fire crew, city staff, and Woodbury County Emergency Management had stopped to take a break. Only after she knew everyone else had eaten, did she finally stop to take a break herself.
In the midst of all the destruction caused by the flooding, spirits are high in Hornick. Neighbors are helping neighbors, and the town is working together to get back on its feet.

“The sheriff's department has been amazing and supportive and so has the fire department,” she said. “All the organizations and all the brothers and sisters and strangers that have just come to help, and the people that have dropped off cleaning supplies is just amazing and wonderful. We are so appreciative.”

Church members in Hornick are working hard to get the church back ready for worship. The Sanctuary was not affected, but the church basement, where the community food bank and fellowship hall is located, was filled with water and sewage.

Newman has concerns for those that have breathing issues and the potential impact of mold but is proud of the work her congregation has done so far.

“We are doing a good job getting it aired and cleaned out,” she said. “Once we get this clean we will set up dehumidifiers and fans. We will probably worship at Salix one more week, but I’d like to get back in the building as quickly as we can.” 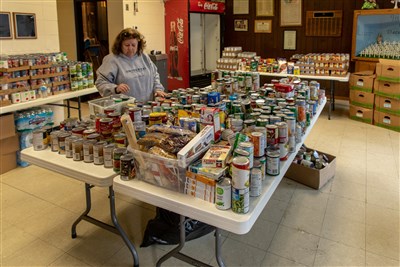 The church kitchen will need to be completely gutted, and anything below the water level in their food pantry is a loss. In the midst of recovery, church members were able to transport food items not affected to a temporary Food Bank set up in the city’s Legion Hall.

Southwest District Superintended Rev. Terra Amundson’s first appointment was in Hornick beginning in 1999. There have been a couple of pastors appointed in between her and Newman, but Amundson said when she heard the news, she “just had to come” to see what she could do.

“My district is still underwater, so I thought I’d come up here and see what I could do to help,” said Amundson. “Even the Conference Disaster Response Coordinator isn’t immune.”

United Methodist Committee on Relief (UMCOR) clean-up buckets had been pre-ordered and are already being distributed across the state. According to Newman, some of those buckets have been shared with the Red Cross for distribution.

“As soon as this water started we ordered two shipments of clean-up buckets. One is in Charles City and another is in Hinton,” Newman said. “Those are being distributed across Northern Iowa. We’ve ordered a shipment for Fremont County in the Southwest District. When their water goes down, they'll be there, and they'll be able to access those buckets immediately as they are needed.”

Donations to UMCOR can be made to US Disaster Response, Advance #901670 or on UMCOR Sunday on March 31. UMCOR has also been working with the Great Plains Conference, and recently gave a $10,000 grant to help with the recovery from floods. 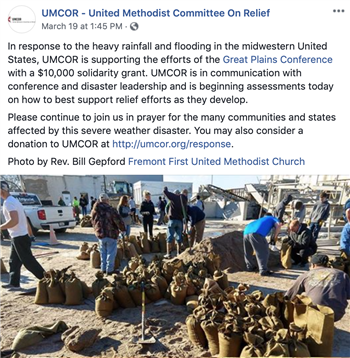 If you want to help flood recovery in Iowa, you can donate to Iowa Disaster Ministries Special Advance #223. These offerings can be made through your local church or mailed to the Iowa Conference Office. All donations will go to directly to churches in Iowa that need disaster relief support.

Newman said it’s also important to reach out to friends and family that you think may have been affected and see what you can do to help. “It's amazing how those phone calls really do matter. We know that we're not alone and that people are loving on us,” she said.

If your church or community has been affected and you need help, reach out to your District Disaster Response Coordinator or your District Office.

“We have volunteers that will help with both the immediate needs and the down the road needs through Disaster Ministries,” said Newman. “We have emergency response volunteers, and then through Volunteers in Mission, we have long-term volunteers who will come back and help rebuild. We will work together to get things where they need to be.”

Newman and Amundson reminisced on some of the ways the church had changed since Amundson’s time there, including a wall of crosses leading into the Sanctuary and an elevator being installed so that everyone could fellowship together in the basement. 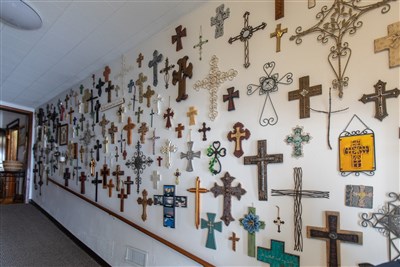 The wall of crosses was something Newman started several years ago as a Lenten project. She said she hung seven crosses on the wall, and when she returned to the church the next day an eighth cross had appeared.

From there, it’s become a symbol of baptisms, funerals, and celebrations. Anything that happens in the community is marked by a new cross. “One day the youth group found a stick in the shape of the cross, so we hung it up immediately because they were so excited,” said Newman.

The Iowa Communications Office is sure that a cross celebrating the renewal of this small but amazing community will be hung to mark this moment in its history soon.
Iowa Communicators Rev. Dr. Art McClanahan, Liz Winders and Courtney Levin contributed to this story. To contact them, email communications@iaumc.org or call 515-974-8907.