"How God's kingdom is supposed to be" 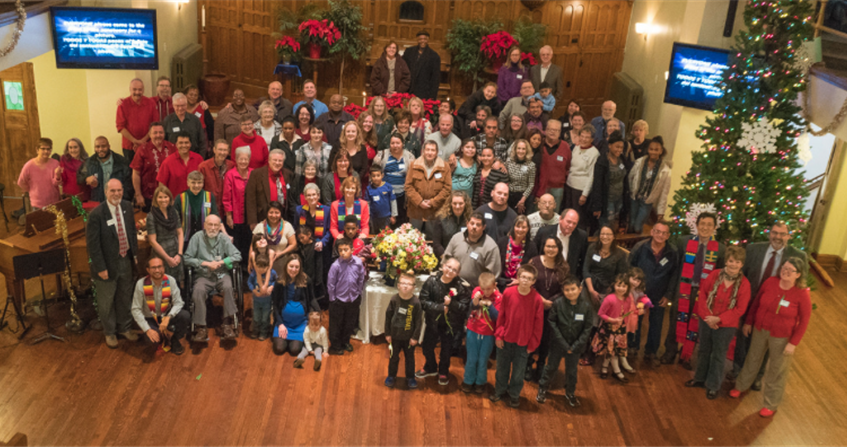 The historic Trinity United Methodist Church and Las Americas Comunidad de Fe formally voted to become one during a worship service on Sunday, December 11, 2016. Bishop Laurie Haller, Central District Superintendent Rev. Heecheon Jeon, and clergy Assistant to the Bishop for Administration, Rev. Bill Poland, joined the celebration of the ministries that reach out to the most diverse neighborhood in Des Moines. 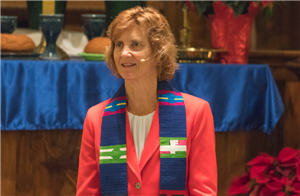 "What a joy to celebrate with Trinity UMC and Las Americas Comunidad de Fe," said Bishop Laurie Haller, "as they voted to become one bilingual, multi-cultural congregation. Trinity Las Americas is a radically inclusive congregation that is committed to offering hope and grace to all."

Rev. Diane McClanahan, Trinity's pastor from 2006-2013, said, "This day has been a long time coming." She remembers how she and then Las Americas pastor and Trinity pastor since that time, Rev. Barb Dinnen, first started bringing the two communities to worship together every Sunday. Dinnen has connected with the Trinity Las Americas faith communities for some 17 years. "We were very clear," McClanahan added, "that we did not want either culture to become the dominant culture. We hoped that each community would be transformed by the other…and that's really what happened over the course of these ten years!"

Countless ministries happen in and through the Trinity Las Americas community. From hundreds of students in the English Language Learners program, to the "prison van ministry" that transports families to see their loved ones who are incarcerated across the state, to the experiences with and through Children and Family Urban Movement that include providing breakfasts for elementary school students who attend Moulton School across the street, to a safe haven for children and youth after school, to serving nearly 50,000 meals each year, to fresh vegetable and bread distribution, to a free medical clinic, to fervent advocacy for documented and undocumented immigrant families, to Bible studies and prayer circles, to advocating for peace and justice and welcome for all persons, and much much more.  "I think that my vision for a church is just like [what takes place at Trinity Las Americas] – "holy chaos," said Superintendent Rev. Heecheon Jeon, borrowing a phrase from the way Dinnen described the ministries. "We gather together from everywhere for great worship services and service," added Jeon, "and a sense of belonging to the kingdom of God.  That is a very welcoming image!" 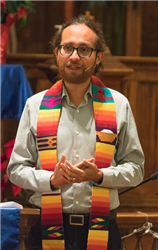 Rev. Alejandro Alfaro-Santiz has been the pastor of the Las Americas community in recent years and is now, by the action of the uniting church conference is the Associate Pastor of Trinity Las Americas. "Trinity and Las Americas' joining is, to me," he said "following the Gospel…being all together, sharing all together in a very diverse community."  Noting the attention that Trinity Las Americas has on the day-to-day lives of its members, friends, and community, Alfaro-Santiz suggested, "Especially now, with what's going on in this country; it's important to show the world what being a Christian really means." And for him that means a sacred diversity. "Sunday is often the most segregated hour of the week…and we're changing that! We have people from Africa, Europe, Central America, from the US.  We have white people, Latino people, Black people…we're very diverse and we're doing this together."

"Together these two communities provide a glimpse of the reign of God," Rev. Diane McClanahan noted, where "there's room at the table for everyone."

Rev. Gil Dawes cared for Las Americas at a time when the community was struggling. "I thought back to the time when a decision was made by the Cabinet to close this place, shortly after 1991. I thought back as I saw the vitality of the various groups of people here who are now part of the congregation and some new leadership from the annual conference inspired some really good potential." Dawes believes that the outward focus of Trinity Las Americas is a vital ministry. "Now here we are, serving a part of the community of Des Moines that's more diverse than any other part. It's where people come who feel lost. The church is an anchor. It's been here. It's still here. It's filled with people who are looking for others they can stand with and count on." And parenthetically, in the context of the one-time move to close the church, Dawes emphasized, "This congregation has been resurrected in a way that can be believed!"

Based on Faith, Grounded in Prayer

The "resurrection" is based on faith and is grounded in prayer.  R J Hernandez has experienced that, personally. Hernandez is the founding member of Las Guitaras de Mexico, a trio that has provided music for the Las Americas and then Trinity and Las Americas worship services over the years.  "When we officially got together to form this music coalition between my group and Las Americas," he remembers, "we had a vision that we would come in and make music and the congregation would sing, but for many years it was not that way." And when he was struggling for a while "Pastor Barb said, ‘have a little faith.'" Hernandez saw that invitation become a reality. "It came full circle when she was ill.  The congregation has grown in faith. Together we started to sing and sing and sing…and pray for Barb." He's also experiencing that strong faith grows to become the external focus of the congregation. "Now, it's a witness…God is working and continues to allow the ministry to be! Especially today as Bishop Laurie opened with song and ended with song. I was overwhelmed.  We are very, very, very fortunate to have such a leader to embrace this church as she has.  It's a place to come…and a place to be."

For former Trinity pastor Rev. Denny Coon, the formal union of Trinity and Las Americas "is great. It's about time. This is an example of what ministry is to be like.  It's great to see the communities come together."

December 11, 2016, will be another landmark day in the evolving history of the Trinity, now Trinity Las Americas United Methodist Church. The church began in 1887 as Prospect Park Methodist Episcopal Church. It 1900 it became North Des Moines ME Church and then when the current building was constructed in 1910, Trinity Methodist Episcopal Church. After beginning as a ministry of presence to Spanish-speaking immigrants and meeting in two other churches, the Des Moines District Hispanic ministry that has been meeting at Trinity since 1994 became Las Americas Comunidad de Fe in 1999.

"Today was wonderful," said Merced Cruz.  She and her husband have seen their children grew up there. She, along with Doris Knight, began the English Language Learners (ELL) program. Of the uniting Sunday, Cruz said, "We were together in God's love and everything.  We are continuing to be one church, one body in Christ. We will continue to be doing that."

Carl Wiederaenders "thought it was fabulous." As someone who's been involved with finances and the building as a trustee, the evolution of the church "has been great to see, especially for the particular community that we serve." He believes "It's a great direction that we are moving" and for him, "The diversity that we have here is energizing." He expressed the hope that "this church [will be] an even bigger force in the community" in the future.

Members of the congregation feel "so fortunate" to be a part of the Trinity Las Americas community. For Mary Ellen Barber that extends beyond the moments of the worship service that formalized the new church even though she "didn't realize that the service would be so meaningful to me."  She's glad that "we've really reached this point [and] not just for us, but also to be an example" for the Des Moines community and for other congregations, too. 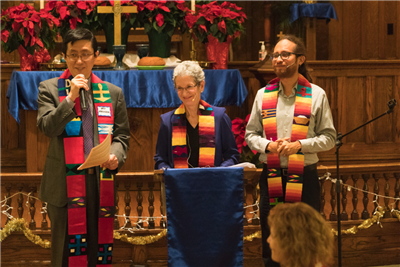 What will the future hold for the new Trinity Las Americas congregation in the newest chapter of the congregation that's served Des Moines' near north side for more than a century? Trinity Las Americas' lead pastor, Rev. Barb Dinnen has an answer. "I remember when Diane McClanahan and I made a video, in 2008, for the United Methodist General Conference," a profile that highlighted the diverse community and how it was making a difference in the lives of the people of the Latino/Anglo congregation, and beyond. "We were asked the question, ‘Is this a success?'  We said something like, ‘So long as people are engaged in the experiment it is a success.'" She firmly believes "It is a success!"

What are the markers of Trinity Las Americas' success and vitality? "Perhaps the most important thing that we see," Dinnen concluded, "is that in the midst of the political climate that is not welcoming and friendly to people with this kind of diversity, this little congregation has staked its claim and said, 'This is how God's kingdom is meant to be in this world.' To be part of that is very profound!"

"Thank you, Trinity Las Americas," said Bishop Laurie Haler, "for leading the way into the fullness of God's love."