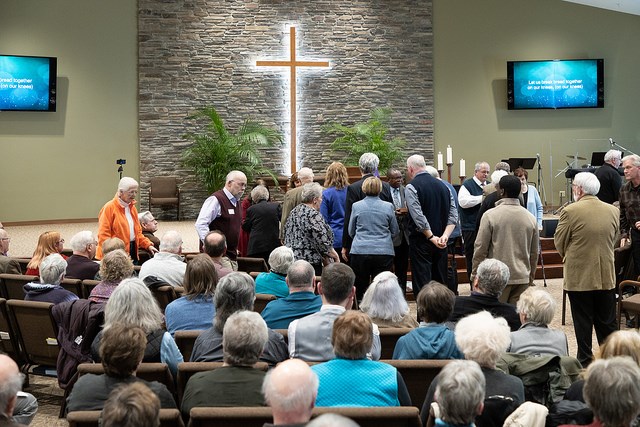 March 13, 2019
share
Iowa United Methodists began a conversation about the 2019 special called General Conference and its impact on their faith communities with a gathering on Sunday, March 10.  The first of three such sessions offered an opportunity to hear from Bishop Laurie Haller, learn about the worldwide gathering’s primary decisions, engage in some Q&A dialogue, and share in Communion and offered healing prayers.

“Because we are all made in God’s image,” Bishop Laurie said, “God will work in our lives.”  In her meditation, entitled, “Gather Up the Fragments,” based on John 6:1-14, she reminded the 250 present that Jesus embraced the “commonplace, the insignificant” throughout the course of his life.  “Every person, no matter how…lost, discarded, wayward, or rejected is precious,” she said. 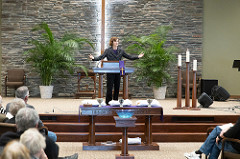 Bishop Laurie drew a connection between the pieces of bread left over after the Holy Meal “on the other side of the Sea of Galilee,” and people living on the margins and in the shadows by saying, “These fragments are the abandoned people, those left behind” as well as representing “our broken brothers and sisters, our shattered hopes and dreams, our betrayed trust.”

She offered a word of caution and hopeful promise.  “We dare not forget that each person is made in God’s image, including LGBTQ friends.  And because we are all made in God’s image, God will work in our lives.”  In addition, Bishop Laurie offered a challenge.  “God, through the example of Jesus, sends you and me out to gather the fragments, especially those who are feeling disenfranchised and rejected right now by their own church.  Jesus charges you and me to make sure that nothing and no one is lost in this world.”

The two lead persons of the Iowa delegation to the General Conference co-led the session, which was held at Salem United Methodist Church in Cedar Rapids.  Rev. Dr. Lilian Gallo Seagren Gospel lesson and Phil Carver, chairperson of the delegation, described the primary decisions of the General Conference, which was held in St. Louis, February 23-26.

In brief, Carver reported that 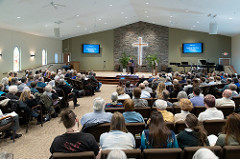 For nearly 30 minutes persons in Salem’s overflowing sanctuary asked clarifying questions that were responded to by Bishop Laurie members of the delegation, nearly half of whom were present for the afternoon session. (Iowa was represented by six clergy and six laypersons at the special called General Conference.)

Persons coming forward to receive Communion also had an opportunity to pause at a number of stations for healing prayer.  The attendees reflected the diversity of lay and clergy and age of Iowa United Methodists.

Together, the assembly prayed, in song, “O give him all your tears and sadness, give him all your years of pain, and you’ll enter into life in Jesus name” (“Spirit Song,” No. 347, The United Methodist Hymnal).

Two additional post-General Conference gatherings will be held this weekend.
You can watch a recording of the March 10 gathering at Salem UMC by clicking here

Coverage of the 2019 called special General Conference is available here