Ingathering: Connecting at home and overseas 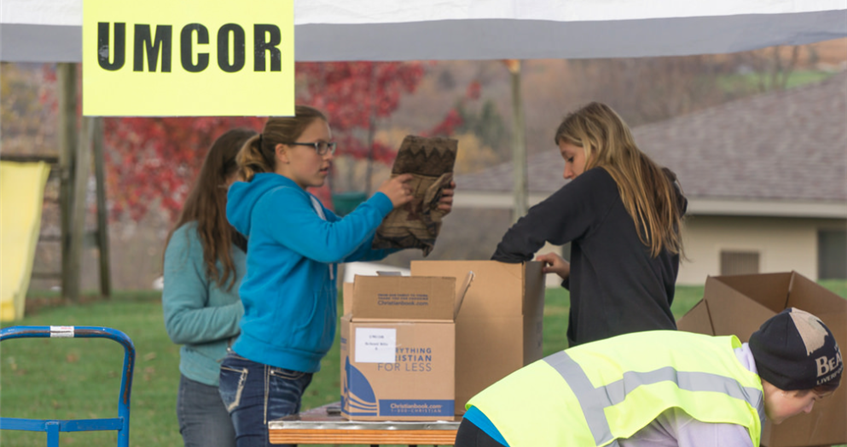 Click here to listen to the audio podcast of the conversation with five members of the Ingathering Team who spoke with Dr. Art McClanahan about the 2016 mission experience.

This year’s 37th Annual Thanksgiving Ingathering took place, Saturday, Nov. 5, helping raise over $980,000 in in-kind and other gifts. The Ingathering continues to bring people together across Iowa Conference districts, state and national lines.

“Sometimes you don’t feel connected until you go to these kinds of events and ah! There’s some other Methodists,” said Mary Davis, state coordinator for the Ingathering. “It’s just a lot of fun and you know what you have done is helping someone you can’t see.”

Ingathering sites were located in Cedar Falls, Cherokee, Greenfield, Mt. Pleasant and Webster City. Every year, school kits and disaster relief kits are put together and loaded onto trucks to send to Nigeria and UMCOR Sager-Brown Depot, respectively. In addition to the kits, Ingathering supports Church World Service, Heifer International, Self-Help International and P.E.T. (Personal Energy Transport). Additionally, using undesignated funds from 2015, each of Iowa’s eight districts received $4,000 to give to local food pantries and other organizations combatting hunger.

The experience brings together United Methodists from all across the state and gives communities a chance to learn more about the mission work of the United Methodist Church, said Davis.

“We had 11 different displays for people to see what they can get involved in,” she said. “We also had different presentations that people could participate in and a worship service.”

In other Ingathering sites, some people are inspired by the beehive of activity that they jump in on the action. Cathi Griswold, Webster City site, said they were able to do all their activities outside, which encouraged more participation.

“It was very neat to see all the cars pull around and they could drop off their kits,” she said. “We had some people who were very excited and they parked their car and they jumped in and helped!”

The Ingathering is a district-wide event, but it can be hard for some churches to participate due to distance and other constraints. Jan Benson, Cedar Falls site, was worried Ingathering might be seen as the event of First United Methodist Church of Cedar Falls.

“We are continually trying to get more churches involved and more people to come and learn about getting involved,” she said.

Their outreach and work paid off this year, though. Benson said a few churches in the area that hadn’t participated previously joined this year. The extra help was appreciated in the work and planning leading up to the big day.

“It’s a good thing to get more and more churches involved in more (activities) rather than just one or two churches just involved for the quilt auction and coffee.

Youth participation is also an important part of Ingathering. Students help pack kits and load kits on trucks. Sally Wilkie, Cherokee site, said the youth brought a lot of enthusiasm to the event.

“The younger kids were out there and they worked hard,” she said.

The Cedar Falls site saw large youth participation because of a lock-in held the night before. Thanks in part to the student participation, 600 school kits were packed and shipped.

“The kids just have so much energy,” said Davis.

Participating in Ingathering is a rewarding experience for participants from the gathering of supplies to trucks being unloaded at UMCOR. Davis was able to travel to Louisiana where she and others from Iowa were able to help unload two truckloads of kits.

“It’s a fulfilling experience, everybody should have the opportunity to unload the truck,” she said.

The school kits were sent to children in Nigeria for children to use there. Things like pencils and paper are something the children treasure, said Rash.

“The kids in Nigeria never had pencil and paper before and this is the first time they had those tools,” she said. “The things we take for granted are extremely special to them.”

Some of Benson’s church family was able to experience the children’s joy as the school kits were unloaded in Nigeria. Benson was able to show the youth Ingathering participants video of the shipment arriving.

“It was a great opportunity to see from start to finish what (Ingathering) kits do for the world,” she said.

Ingathering kits not only help those overseas but also here at home. When heavy rains caused extreme flooding in Northeast Iowa earlier this year, cleaning buckets and health kits made their way back to Iowa.

“In Cedar Falls we’ve been the recipients to some of those things we were packing when we had the floods before,” said Rash. “What goes around comes around sometimes.”

Overall, Ingathering participants said the event is an opportunity to celebrate the work the United Methodist Church and what its people are doing for the world.

“We’re all working together to make something wonderful,” said Davis.

For more information about assembling kits and other Ingathering activities for 2017, download the 2016/2017 Ingathering booklet