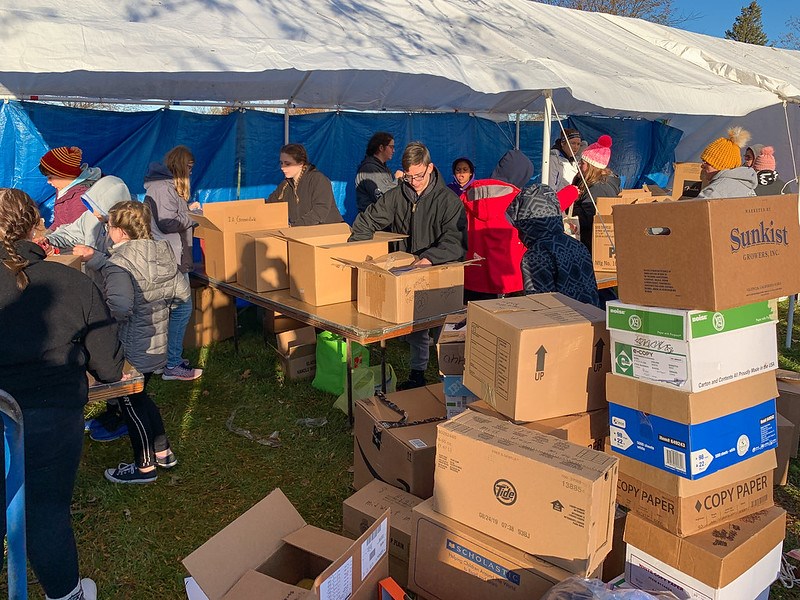 Mission Ingathering, formerly known as Thanksgiving Ingathering, marked forty years of making a difference on Saturday, November 2.  “The Mission Ingathering is a way for Iowa United Methodists to address humanitarian problems locally and around the world, including hunger, poverty, and disaster,” according to the Ingathering statements.  It’s a way “to show the love of Christ to the world’s people by ministering to their needs.”

What began as a small collection of blankets, kits, animals, and corn on the campus of Westmar College in 1980, has grown into an Iowa Conference collection that annually raises nearly $1 million in financial gifts and in-kind donations. (Click here to read the history of the Ingathering.)

At the Greenfield UMC site, Pastor Robyn Plocher remember remembered the first that first Ingathering.  “I was a freshman at Westmar College that year.  One of the big projects that was supported was Heifer International, which I also had a personal history with.  The area just below my dorm window was a courtyard, and that was the receiving area for all of the livestock...which was literally pigs!”

Click here to see photos from Mission Ingathering at Greenfield

Plocher, who is a Deacon serving Panora United Methodist Church, remembers that she and other religion majors were recruited to help with some of the activity of that first Ingathering.  “There was a lot of excitement.  We helped to carry things and move things around.  I don’t know if anybody had any idea, right at that moment, that it would still be happening forty years later.”  And that’s why she was at Greenfield - “I was there for that first one, and it just seemed like I should be here today.”  (Click here to listen to Pastor Robyn talk about early Ingatherings) 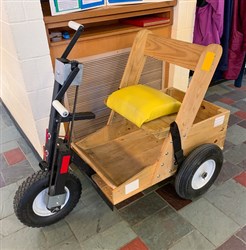 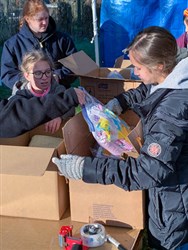 It takes many hands to have a successful Mission Ingathering.  While each of the five sites is uniques in its own way, there are also some similarities. Several have youth activities that begin on the Friday night before the Ingathering.  So, in addition to being the willing workers to take boxes out of the cars and trucks that begin to stream in early Saturday morning and repack the kits into standard count and size boxes, youth from many congregations build their own sense of community and develop a greater appreciation for missions.

The repackaged kits from the five sites are gathered together and forwarded to the Midwest Mission distribution center.  According to the 2019 Ingathering manual, “Midwest Mission collects, makes, assembles, and restores supplies for humanitarian and disaster relief. The work is done by volunteers who come from all over the U.S. to serve. The 30,000 square-foot facility is located on a 10-acre campus 4 miles south of Springfield, Illinois. It is the second largest of the cooperating depots in the UMCOR Relief Supply Network, and partners with Food for the Poor, Franciscan Mission Warehouse, Christians in Mission, and U.S. South Command donating supplies to humanitarian aid missions in Latin America and Africa...Midwest Mission sent 166 domestic shipments and 25 international shipments in 2018, resulting in $4.4 million in aid.”

Pastor Robyn Plocher and her mother-in-law had an opportunity to follow the journey of collected kits from Iowa one year.  “One year we went with a group from St. Marks UMC in Cedar Rapids to the depot.  We were there the Monday that the truck we had loaded on the previous Saturday arrived.  It was our job to help to unload the kits that were donated by the people in Iowa.  It was lots of work, and also very meaningful to be on that end of things as well.” 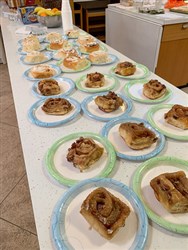 Another common aspect of the Ingathering is food.  Lots of food.  Freshly prepared, home-baked food.  At Greenfield, for example, two women from the congregation began baking at early in the morning.  Work on the cinnamon iced and honey glazed pecan rolls started at 4:20 am!  Lunch is also served at several sites.

Quilts have been a part of the Ingathering experience over the years.  Creatively designed and sewn, the quilts hang on display prior to either silent or called auctions.  Woodcraft items and bazaars also contribute to the overall financial support of the Ingathering.  Mission project presentations and worship are also key elements of the day. 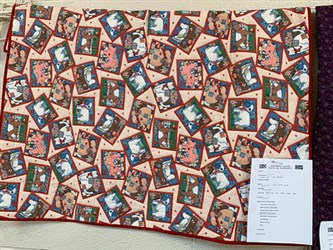 Great thanks to the host sites and their willing workers for their support of the 2019 Mission Ingathering. The event is a success because of the countless volunteers.  Equally important and deeply appreciated is the extraordinary generosity of so many Iowa United Methodists who gather, create and bring the assembled kits and financial gifts to the Mission Ingathering.  And certainly, deep appreciation to the Chairperson - Dan Houston, Coordinators - Mary and Harvey Davis, and the District representatives - Harold Werley (NW), Alaire Willits (NC), Jeanine Owens (SC/east), Mary Morris (SC/west), Jan Benson (NE), Mary and Bruce Baker (Central), Judy Brotherton (SE), and Jim Tussey (SW).