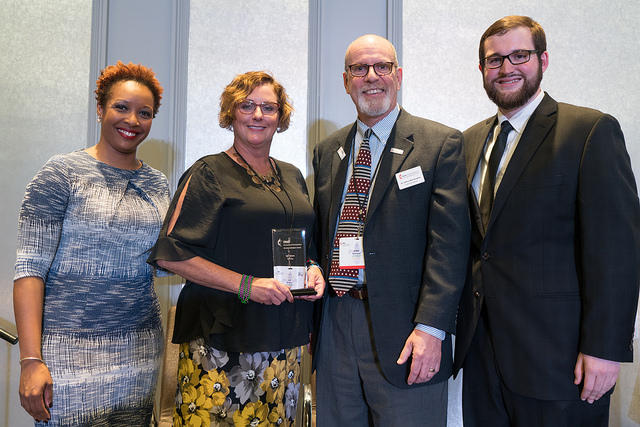 The Communications Ministry Team of the Iowa Conference received  several awards at the 2017 gathering of the United Methodist Association of Communicators (UMAC).  Nods were given to electronic media and The Reporter during the event, held in New Orleans March 22-24. 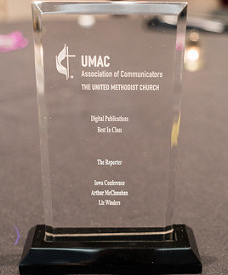 Best in Class for digital publications was presented to Liz Winders and Dr. Art McClanahan for The Reporter.  It also received a first place certificate for the Division A, Category B ePublication category.

“Iowa Conference Conversations,” the podcast that shares stories of interest to the Conference was recognized with a third place certificate in the Class VI – audio production category.

First Grace UMC in New Orleans hosted the communicators for the first morning’s experience.  The congregation is a new faith community that rose from First UMC and Grace UMC communities which were both flooded out by Hurricane Katrina.  Located just blocks apart, the white First UMC congregation and the Black Grace UMC have become, as First Grace UMC,  a vibrant, community-focused congregation that includes a Latino congregation, offers feeding programs and pantry, addresses concerns in the City of New Orleans, and is at the forefront of conversations about caring for immigrant sisters and brothers and their families.

Four New Orleans and Louisiana leaders, including United Methodist Bishop Cynthia Fierro Harvey, talked about how, together, the church, non-government-organizations, and civic groups reached out to survivors of Hurricane Katrina as well as the families of the more than 1000 persons who perished in the storm.

Speed training, 20-minute presentations covered some of the nuts and bolts of communications on Thursday afternoon.

Friday segments included moving“Beyond Thoughts and Prayers” outside the church into the community, particularly in crisis moments, taking the church beyond the walls to make a difference in people’s lives.  “Communicating the Way Forward” looked ahead to the work of the commission now wrestling with the future of the denomination.  Communicators who have guided their annual conference’s prayer weeks shared their experiences.  Rapid response and being “on the front lines” offered insights into the way to cover and engage people in the critical evolving community and denominational circumstances.
During the Members Meeting, Iowa Conference Director of Communications Dr. Art McClanahan concluded his tenure as chairperson of the Leadership Team.  He was elected to continue on the Team as Chairperson Emeritus.