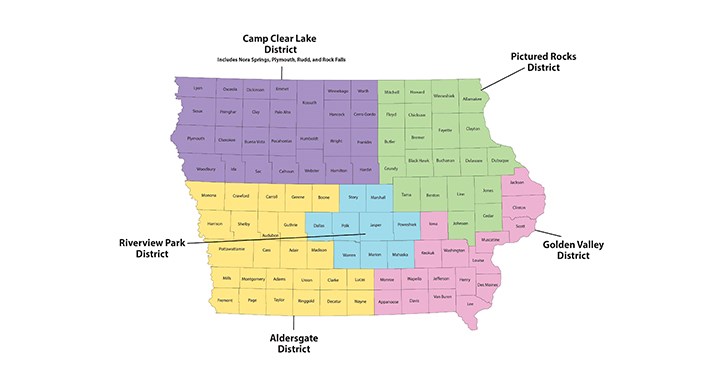 April 09, 2021
share
As the Iowa Annual Conference transitions from eight districts to five, the districts will be renamed to honor the legacy of the Iowa United Methodist and Evangelical United Brethren Camp and Retreat Centers. The discernment of the new district names began in March 2020, and a small task force was officially named by the Bishop in March 2021. The new district names will be in effect on July 1, 2021.

The camp and retreat centers that were a part of Methodist Episcopal and Evangelical United Brethren Iowa Conferences provided powerful and effective ministries that impacted hundreds of thousands of people between the rivers. Each camp was on holy ground, and countless children, youth, and adults came to know Jesus for the first time. They also heard a call to deeper discipleship, grew in their leadership capacity, and experienced a call to ministry, which continues to create a ripple effect in our churches and communities.

Grandview United Methodist Church was one of many churches that supported the ministries of Pictured Rocks Camp and Retreat Center. Their Lead Pastor Rev. Tom Shinkle says, “Each time a camp had to be closed there was very real grief that continues to be real for thousands of people. However, naming a district in honor and memory of those places puts that name back in a prominent place. It not only points to and helps people remember the actual, physical place but also opens the memory box, reminding people of those experiences with God and God’s people that helped change lives. I know I feel will feel honored to serve in the Pictured Rocks District.”

Jackie Cordon, one of the former directors of Aldersgate Camp and Retreat Center shared, “The name of our camp was an opportunity to introduce and connect people to the story of John Wesley and how his heart was strangely warmed on Aldersgate Street in London. Now, when we speak the name of our new district, we again have an opportunity not only to connect with the story of our Wesleyan heritage but also to connect to the stories of lives changed at Aldersgate here in Iowa.”

Brief History of the Camps

Clear Lake UM Camp in Clear Lake was established in 1850 for people of all ages. Many of the cabins were owned by different Methodist churches in Iowa. It closed in the 1980s and is now part of a Homeowners Association. St. Paul's United Methodist Church still has a cabin on the original grounds.

Pictured Rocks UM Camp in Monticello operated from 1961-2019. It is now owned and operated by Camp Courageous and serves youth and adults with disabilities.

Riverview Park in Cedar Falls was founded in 1921 by the Evangelical United Brethren* as a retreat location for pastors and their families. It was sold in the 1980s and is now a large conference center with retreat facilities.

Aldersgate UM Camp in Villisca operated from 1955-2008. It is now owned and operated by the county Department of Natural Resources.

Golden Valley UM Camp in Lockridge closed in 2008 and was turned into a wedding chapel at the time of its closing.

Lake Okoboji UM Camp in Spirit Lake and Wesley Woods UM Camp in Indianola are anticipating welcoming campers back on site for the 2021 summer camping season. Visit the Iowa United Methodist Camp and Retreats website to learn more and register.

In February, campaigners for Iowa United Methodist Camps engaged nearly 1,500 people across the country to share the story of the camping program and invite support to help youth grow spiritually. As a result of those conversations, donors pledged $300,300 to support campers at Lake Okoboji and Wesley Woods UM Camps.

Pledge your support today by donating to continue the life-changing camp and retreat ministry in the Iowa Conference.

*An earlier version of this release incorrectly stated that the Riverview Camp was run by the Methodist Church, not the Evangelical United Brethren​. The Iowa Conference regrets the mistake.