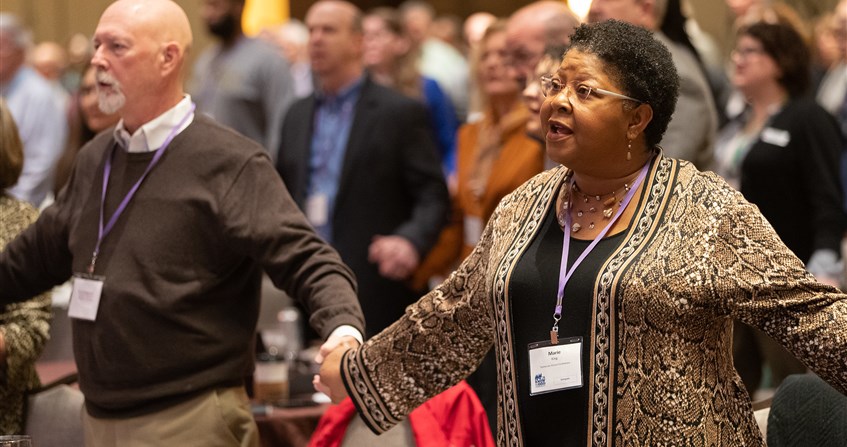 John Rothlisberger and Rev. Dr. Lanette Plambeck, two General Conference delegates, traveled to Nashville for a briefing about the plans that will be presented to the worldwide decision-making body of The United Methodist Church in May.

For Plambeck there is “a call to do what feels faithful [which] is a good outcome.”

“A lot of the potentials seem to be coming together into this upcoming General Conference that aren’t dissimilar to what I've experienced prior to this, but seem like things are more articulated than what we've maybe had in the past,” Plambeck said.

Rothlisberger felt that hearing representatives of the six ethnic ministry plans describe their significant growth in the church was “uplifting.”

Statistics were being presented showing membership was down, “but there's growth in membership in groups like Asian Americans at 106 percent, Pacific Islanders at 101 percent, Hispanics up 78 percent, African Americans up 37 percent and Native Americans up 23 percent,” Rothlisberger said. “Those groups are all growing in our structure…and there's a fear among them that if we break apart who are they in that new structure? It’s the conundrum of structural integrity or recreation – maybe at the expense of people that we don’t want to leave behind.”

One of the presentations that made Plambeck “catch her breath” was when Rev. Chebon Kernell, executive secretary of Native American and Indigenous Ministries spoke.

“(He compared the situation in the church to) the displacement of the first nation people into a land that was less than viable,” she said. “I get how that translates right now to the removal of peoples from a denomination to something that might be less vital or less viable for them made me catch my breath. I had not in my genuine efforts to be listening to people considered this displacement and what that means and how that is sitting with folks.”

When asked how he felt after the General Conference Briefing, Rothlisberger said, “because the briefing better explained in detail about the Protocol (for Reconciliation through Separation), and from the different groups that had other proposals, has made it clearer for me.”

“Getting alongside of people and visiting with them reminded me that there's something deeper that binds us together,” said Plambeck.

To learn more about the General Conference 2020 Briefing, read this article from The United Methodist News Service.