When a background in food service, hungry children, and a church turns into serving over 100,000 community meals, you know God has a hand in making it happen. On the evening of October 15, First United Methodist Church in Iowa Falls, Iowa, served 527 meals, the largest amount they have ever done, and celebrated serving 100,000 meals to their community.

In 2011, Lyn Evans wanted to ensure her kids got a meal before confirmation class and youth group began at First United Methodist Church in Iowa Falls. She organized a group of parents to help in the kitchen and began serving a meal to the 25-30 kids at church each week for Wednesday night activities.
See a gallery of images from the evening. 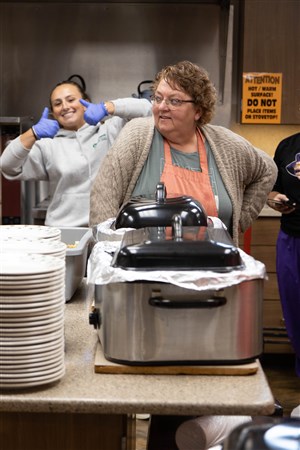 “We discovered that our church sits in what’s called a “pocket of poverty” according to the U.S. Census,” said Evans, Iowa Falls First UMC’s food service coordinator. “We began by working with the schools to start a free lunch program and serving it at the local elementary school, but in that process, knowing that there were people in this area that were having trouble making ends meet, we decided to open up a meal at the church. And that’s how we started, and then it just exploded.”

Most communication about the community meal has been through word of mouth. The church emailed different agencies in Hardin County and partnered with other local churches.

“Through those agencies, meeting clients and telling them that it’s available helped spread the word. We put a list of the monthly menus at the school, so the kids knew it was available. That was how it started to build. The pandemic was rough, and the economy now is not good. We have seen a big explosion of need,” said Evans.

The food is purchased through two main avenues, Fareway grocery store in Iowa Falls and the Food Bank of Iowa.

“We have been very lucky the last few years and received ground beef from the Food Bank. As far as meal planning, we have a rotation that we go through. Occasionally, I get creative and throw something new in, and if it works, we keep it,” said Evans.

The community meal is in partnership with other churches in Iowa Falls for weekly volunteers and cookies, too. 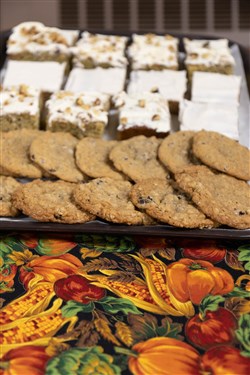 “Most churches in town are on a rotation for bringing cookies. Once a month, their group from their church gets together and brings cookies. My outside volunteers, honestly, they have contacted me,” said Evans. “I have not had to work very hard at getting volunteers. This has been something that people really want to get involved in, so it’s been very nice.”

“I was unaware of what was happening right in front of me as far as people in need. Some people don’t have refrigerators or stoves. I’ve learned that many of these people work hard every day, and they can’t get there, and their kids are suffering, which motivated me initially,” said Evans. “It was a lot of the kids not getting fed. Knowing that that is happening right here, where I live, was eye-opening. I have had a completely different thought process now in the last ten years, seeing what is happening and how this meal has is sometimes the only hot meal that some of these people get and the only interaction where they come in and sit at a table with a group of people and have a meal. It’s life-changing to do something like this because you have no idea what’s going on until you’re involved.”

Pastor Erling works the line, said Evans. He is in the dining room, where he makes connections with people, and even if they’re not in the pew on Sunday morning, he touches many of those people through his interactions.

“I feel there is a church thing going on in that dining room and in line with him talking to people. Even if we don’t see them again on Sunday morning, or even if the kids aren’t here, we’re making that connection, and they know that we’re here for them. We’re a safe place and will listen,” said Evans.

Evans thinks the community meal is one of those “God things” that goes on every week.

“It just happens. People show up. We always have money. We always have food. There have been nights when I think we’re not going to make it, and we end up making it,” said Evan. “The neatest part of this is the ecumenical group of people who want to help. They don’t care that it’s at the Methodist Church. They want to be a part of it. And everybody’s welcome. This is church for me, almost more than worship on Sunday morning. This is where I get my recharge, even though I go home crash, but you know, you get that fulfillment when you’re here.”