Iowa UM Advocacy Day – will we go to the other side? 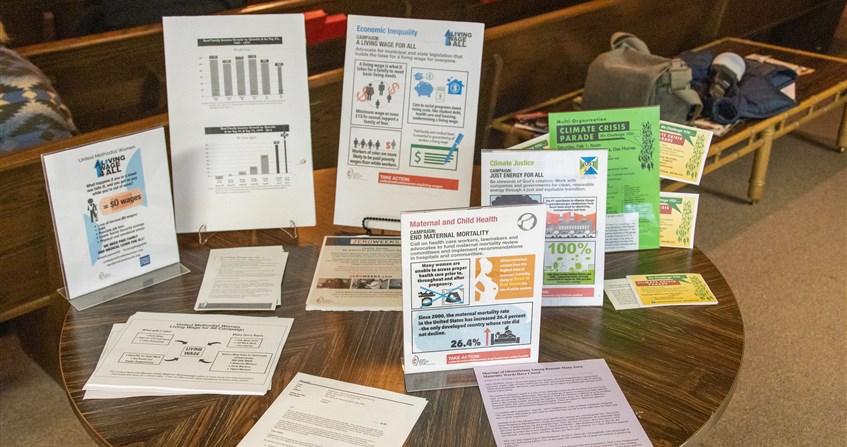 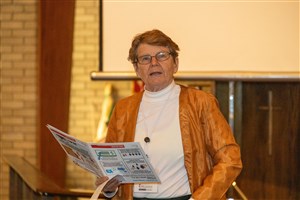 Streff shared the story of her friend Amanda, a “returning citizen,” working toward re-entry after time in prison. Amanda’s story illustrated that the barriers returning citizens face to work and health are daunting, and Streff reminded us of our responsibilities to others as outlined in Matthew 25.

UM lobbying consultant Bob Mulqueen followed with advocacy training. Mulqueen emphasized the ABCs of advocacy: accuracy, brevity and courtesy. “Get to the point right away,” he said. He also recommended persistence, sharing that advocates should keep trying to connect with legislators if they’re not at their desks. He noted that persistence pays off on difficult issues as well, adding it may be something you say that will lead to changes in legislation. “Some people will surprise you,” he concluded.

About 10 a.m., attendees broke into two groups, to be shuttled to the Capitol. Once there, people broke into smaller groups to attend subcommittee meetings and locate their individual legislators. Members of the Iowa UM Advocacy Team worked with first time advocates to guide them through the Capitol and the process.

Between 11:35 and noon, advocates returned to Wesley UMC for lunch and fellowship, sharing stories and observations. Mission U Dean Judy Marnin expressed pleasure at catching her newest legislator for the first time. Bishop Laurie met the Senate Leader and House Minority Leader, as well as taking time to talk with our advocacy team. 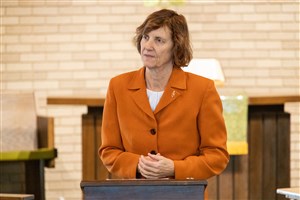 After lunch, Streff continued our Advocacy Day Program with an address by Bishop Laurie, based on Mark’s story of Jesus calming the storm as he and the disciples crossed the Sea of Galilee. The bishop noted Jesus and the disciples had had great success in their ministries on the first side of the lake, but they were now crossing to the other side— where the Others lived. Then she asked, “Who are the Others in Iowa?” She encouraged us to use our gifts and resources to go to the Other side.

Following the bishop, Streff introduced a series of speakers to address UMW’s four priority issues for this quadrennium: Living Wage for All, Maternal and Child Health, Climate Justice and Criminalization of Communities of Color and Mass Incarceration.

Bobby Jo Paige, a member of our Conference Advocacy Team, shared information about the campaign for a living wage, citing that 43.5 percent of Americans live in poverty. She provided examples from the restaurant industry and noted that other costs of poverty wages include hopelessness and depression.

Jordan Oster and Ingrid Gronstal Anderson from the Iowa Environmental Council presented information on climate justice specifically related to water quality and clean energy. Anderson noted that “Public policy picks winners and losers.” She added that instead it needs to look at everyone.

Senator Janet Petersen took time from her work at the Capitol to share information on maternal health in Iowa. Having experienced both joy and loss in childbirth, she has championed SF2062, the Healthy Moms and Babies Act. She informed the audience that 40 percent of moms in Iowa are on Medicaid and that many counties in Iowa are without maternal health care services. She also noted huge racial disparities in mother and infant care.

Advocacy Team Leader Brian Carter completed the program with a reminder that more than four million felons, who have served their time, are without voting rights. This brought Advocacy Day full circle back to Amanda’s story.

And to Bishop Laurie’s question—how will we respond when God calls us to walk with the Others?