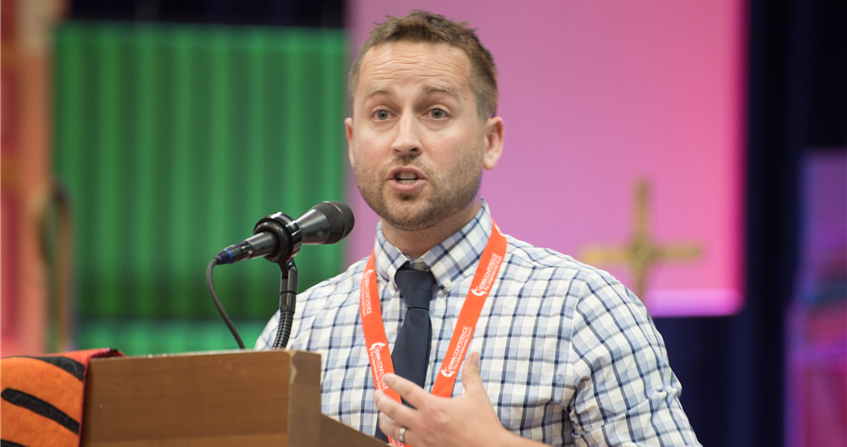 June 10, 2018
share
Bryan Johnson shared with Annual Conference Session attendees Saturday morning about what it means to have an "Adventure of a Lifetime" with the Iowa United Methodist Camp Program.

Johnson began with a photo of him as an adolescent around the time he first attended an Iowa United Methodist Camp, saying God became real to him there.

He then shared a current photo with his wife, explaining they were blessed to have spent 25+ years being a part of the Iowa Camping Ministry.

"Camp has changed my life," said Johnson. "And I'm not alone."

He then similarly showed before and after photos of others he knew who'd attended United Methodist Camp as a child, and then went on to be pastors or camp staff members.

"So, what do we have in common here?" asked Johnson.

"These are just a few folks, I know there are many more here today who I could highlight."

"We really think there's something to this 'Adventure of a Lifetime' thing," he added.

Johnson said his work encompasses ensuring that the camps are good stewards of the financial resources of the Iowa United Methodist Church.

He reminded the Conference Session how apportionment support was likely to decrease in the next three years, resulting in concern over whether camp staff can continue to operate a financially sound program.

"As the overseer of this program, this makes me a little bit concerned," said Johnson.

"When we break down how each site utilizes apportionment dollars, we will see that Okoboji and Wesley Woods are able to take the Apportionment Funds received and double them," he explained. "In simple terms that means that for every dollar that Okoboji and Wesley Woods receive is turned into $2. For every dollar that Pictured Rocks receives, a dollar is brought back in return."

He then advised the congregation that the Board of Conference Camp and Retreats had been approached by Camp Courageous, a residential camp program in Monticello that works primarily to serve people with disabilities, about a purchase of Pictured Rocks United Methodist Camp.

"There are a number of possibilities moving forward if a sale were to occur," he said, "including potential continued use of Pictured Rocks for United Methodist Programming without ownership of the property."

This fall, the Board of Camps will be voting on a direction for Pictured Rocks and the IAUMC Camping Program as a whole, Johnson said. While this is not typically an exciting topic, he continued, there are some outcomes that could be fruitful for the IAUMC and Iowa UM Camps and the Conference.

"No matter what, we see a positive future for the IAUMC camps," stated Johnson.

"Whatever decisions are made, Iowa UM Camps see our role as partners and extensions of the local church," he said. "As a result, it is important to know that no action will be finalized without the approval of the Annual Conference."

Johnson underscored that it was important to be transparent in all areas of the camping ministry, inviting Iowa Annual Conference members to offer feedback and ask questions.