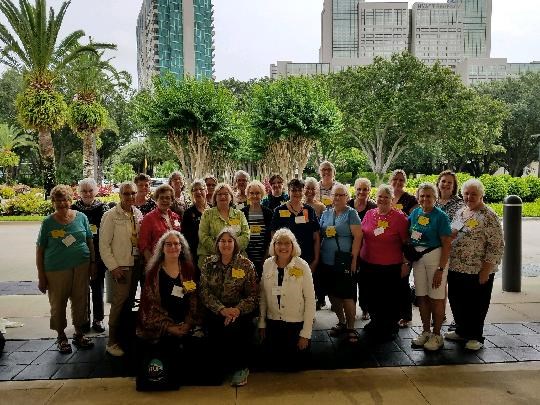 Twenty-eight Iowa women joined nearly 2,000 other United Women in Faith members for a weekend in Orlando, experiencing the first quadrennial Assembly of the newly named organization (formerly United Methodist Women). In addition, thirteen Iowa women participated along with 1,000 others in the first ever virtual component for the event.

Enthusiastic music provided by an all-women band and song leaders, inspirational speakers, graceful liturgical dancers, an amazing spoken word artist, and excited leaders kept us singing, dancing, and pondering the theme “Turn It Up!” With the goal of increasing our accessibility to all women, we affirmed our mission of Faith, Sisterhood, and Action as hallmarks of the new organization. Pastor Janet Wolf, resident theologian for the Assembly, reminded us clearly that there is much work to do to bring God’s vision of an abundant life for ALL to fruition. We need to be about the business of Turning it Up.

A record sixty new Deaconesses and Home Missioners were commissioned during the Assembly, accepting their call to lives of love, justice, and service. At the close of the Assembly, four of our United Methodist women bishops offered their collective support and encouragement for our new United Women in Faith along with General Secretaries from Commission on Religion and Race, Commission on the Status and Role of Women, the Board of Global Ministries and the Board of Discipleship.

It’s a new day, and United Women in Faith are ready to Turn it Up!