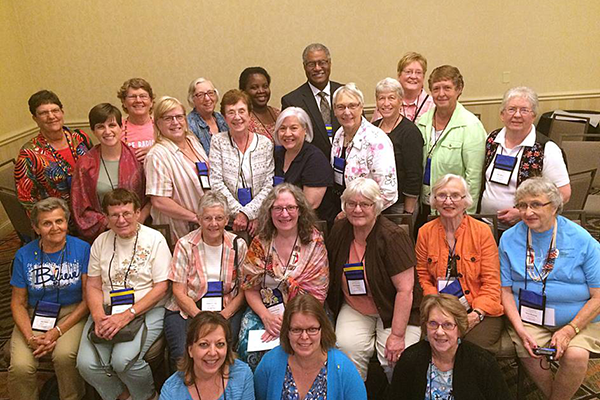 July 06, 2016
share
Just this June, in Grand Rapids, Michigan, the North Central Jurisdiction of the United Methodist Women held their quadrennial gathering. Several women from the Iowa Conference attended, and one of them, Linda Blazek Garvin, was even elected to a position with the UMW. “The new Secretary for the North Central Jurisdiction committee is Linda Blazek Garvin from Polk City,” says Rita Vallery, President of the UMW for the Iowa Annual Conference, noting that Blazek Garvin previously served as secretary for the Iowa Conference.

A History of Helping Others

United Methodist Women will be celebrating its 150th anniversary in a few years, an event that is already being planned for. “150 years will be in 2019, but it takes many years of preparation to get to that point, and we’re celebrating what we’ve done in the past and what we’re working towards in the future,” Vallery explains. “Part of that celebration was raising money for what’s called a Legacy Fund. That’s a fund that in the future will support budget-wise all of the administrative costs that we incur.” That means that all the money they raise for missions and projects in the future will go directly to the people and the institutions that need it.

Listen to Iowa UMW president Rita Vallery talk about the assembly in an Iowa Conference Conversation with Dr. Art McClanahan


During the recent event in Michigan, there was an opportunity to visit one such institution. “It’s called the Grand Rapids Community House, and it involves working in after-school programs, working with children in daycare and pre-schools, working with the elderly in programming for meals and celebrations and health screenings – just a whole variety of ministries with elderly people,” she says. “They also own a house that ministers to women that have just been released from prison or are suffering from drug or alcohol addiction, or who have been trafficked and need a safe place to stay to get their lives back together again.”

Vallery and her fellow Iowans were impressed with what they saw. “It just gives an idea of what our money really goes for and you get to see the institution itself and how it touches so many lives individually. The children were out playing in the playground while we were there. Oftentimes, these are maybe single moms or some of the working poor that need a safe place for their children to be, and so it really changes lives, for just a variety of people, and makes life richer and more productive.”

At the UMW assembly, each conference in the North Central Jurisdiction was asked to bring an interactive display, and Iowa was happy to oblige. “Our social action person, Rita Carter, made a display on the new four priorities that we have,” says Vallery. Those priorities, which change every four years, are maternal health care, economic inequality, climate justice, and criminalization of communities of people of color. The display highlighted each priority, and asked people to match various statements to the appropriate priority. “It just really made people think about each of these areas, and some of the injustices and inequality that many people, even in our country, endure.”

She feels that “One of the strengths of United Methodist Women is working on advocacy. It’s a way of putting our belief in God and our love for people into action when we address all of these different issues, and trying to change people’s lives in a very positive way.”

UMW will be highlighting both advocacy and education a little later this month with Mission u, an event taking place throughout the country – Iowa’s gathering will be held in Marshalltown. “Each year, in July, we have a four-day event, and women come from all over the state. Everyone takes a spiritual growth study, and then they choose from two others. This year, the spiritual growth study is on human sexuality, and the other two they choose from will be Latin America and climate justice,” says Vallery.

“We have a number of break-outs that people can attend. One will be making kind of enhanced health kits,” she shares, explaining that they basically start with an UMCOR-style health kit and then add shampoo, conditioner, feminine products, and other items that might be of use to women who have had to escape dangerous domestic situations, are living on the streets, or are vulnerable in some other way. “It’s an effort to give them in that kit a little card with the 800 numbers for both domestic violence and human trafficking, so if they need help when they’re out living on their own, they have someone to contact to kind of help them get out of a bad situation.”

Pastors and lay people alike are invited to take part in Mission u and its activities, and Vallery emphasizes that everyone is welcome to attend. There are even scholarships available for those who might need a little financial assistance.

With nearly 150 years in service, United Methodist Women is still clearly doing great things. The organization means a lot to people like Rita Vallery. “One of the things that we’re strong in is spiritual growth, getting to know God, to use our minds through our reading program, to study through our Mission u, to put our faith into action through all of our advocacy – and it’s just been a wonderful experience learning leadership abilities and serving with other women who are like-minded in concerns for women, youth, and children around the world,” she says.

“I think having 100 institutions in the United States and at least that many in over 80 countries around the world shows how very strong we are in taking the message of Jesus Christ for the transformation of the world everywhere. And one of the strong points is the sense of fellowship that women have for one another in their local churches. I think everyone is interested in eradicating hunger and seeing that every child has clean water and shelter and the love of God in their life.”