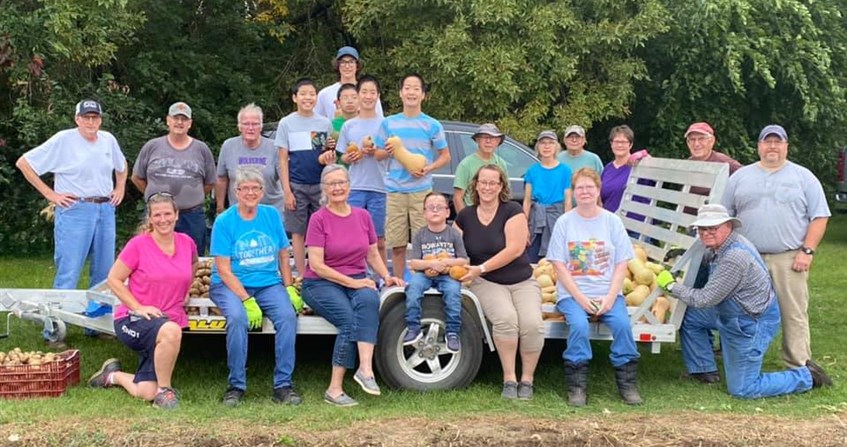 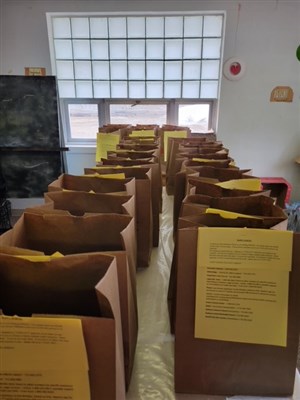 By: Liz Winders, Director of Communications

What started as delivering a few sacks of fresh garden potatoes has now expanded into Ruthven United Methodist Church’s (RUMC) Smile Sack Mission Project by providing food to over thirty-five households in their community.

The city of Ruthven has a low-lying piece of property donated years ago by a generous family. RUMC church workers have turned a couple of plots of this Iowa “north edge of the town” field into potatoes, cucumbers, tomatoes, squash, onions, and pumpkins, and in 2021, flowers were grown and shared as well.

The Ruthven UMC has a long history of a “Summer Sunday Produce” stand. Several people with extensive gardens brought produce and offered a little farmer’s market in the church entryway, with free-will donations toward mission committee funds for local, state, and global mission projects.

During the COVID-19 pandemic, this mission and ministry work evolved into a Community Garden Ministry and Smile Sacks Mission project that brings fresh produce, meat, and groceries to older citizens, shut-ins, single-parent families, and others who have endured or are experiencing hardships of illness, lower or fixed incomes, or loneliness. Some are RUMC members—several are not. Referrals come through other recipients, churches, or community members.

“Before the pandemic, gardeners from our church had an idea to adopt some community garden plots to grow more produce than they could donate to farmer’s markets and food banks. Many are grandparents and former teachers and desired a connection with community members where they could teach them about gardening and food preservation,” said Kris Hackbart, pastor of Ruthven UMC. “We used a Thrivent Financial Action Team grant of $250 to buy the seeds for potatoes, onions, corn, and tomato sets.” 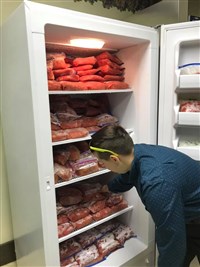 RUMC volunteers gathered at the Community Gardens to plant seeds and install tomato cages, weed, and mulch during the spring and summer. Al and Jean Pueterbaugh had a small tractor with a potato planter and two-row potato harvester to help make things easier. Tomatoes, potatoes, and onions were abundant, but raccoons ravaged the corn. Volunteers of all ages helped, but not many community members were involved.

“When the tomatoes came in, we gathered in the church kitchen to blanch and freeze tomatoes in quart bags,” said Hackbart. “So much knowledge and wisdom swirled around the kitchen. We continued to hope that this could become a learning time, with younger families learning the ways of preservation.”

With a freezer full of tomatoes, the idea of Smile Sacks began. Al Pueterbaugh and Maureen Horsley had the idea to fill brown paper bags with two quarts of frozen tomatoes, a pound of frozen hamburger, and other fixings. The delivery list started with the church’s homebound members and a few others, but the list kept growing. 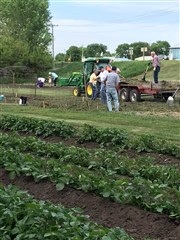 “As 2020 rolled around, the seed money was used again, and we had everything ready to go when COVID shut down much of our indoor activities. The seeds were sown, and the garden mulched again. The Community Gardens was where we could still get together, out in the wind and fresh air. Indoor worship was canceled, so we started having worship after weeding. ‘Gather in the Garden’ became our point of connection. The garden grew, and we moved our gathering place to the local park on Sunday mornings,” said Hackbart. “The ‘Summer Sunday Produce’ appeared as usual, and we made deliveries to homebound members and the local Independent Living apartments.”

The community canceled the farmer’s market, so Gary and Ann Holck hosted “Gary’s Garden” for five weeks that summer. Produce came from the Community Garden and other gardeners. People were hungry for fresh food and interaction with real people. Being outside and with a table of tomatoes between each other, the RUMC managed to raise even more money for their missions. 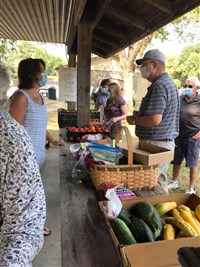 “During a meat giveaway in Ruthven, we shared Community Garden produce by adding six potatoes and two onions to the packages. We helped deliver meat to folks who couldn’t come and pick it up. Smile Sacks were still going out, as we had a lot of tomatoes to give away. Someone donated half a cow in one-pound chubs. One of the Smile Sack recipients crocheted scrubbers and added them to the sacks. Other volunteers helped deliver. Produce, especially tomatoes and squash, were shared with the local Care Center and others who fed people during the pandemic,” said Hackbart.

“Few decline a sack of food delivered with a SMILE! Many enjoy the brief visit as much as the food,” said Maureen Reeves Horsley, RUMC’s missions chairperson. “With the help of many, a brown grocery sack is donated now to over 35 households. Smile Sacks included items such as a frozen quart of garden tomatoes or corn, a pound of burger (some donated by generous farmers), a can of chili beans, a box of hamburger helper, and maybe a half dozen eggs or a jar of peanut butter. Occasionally, they also contain donated fresh fruit. Currently, these are delivered every 5 - 7 weeks.” 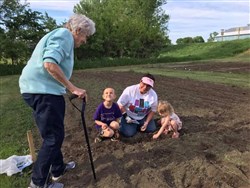 “We gathered around the garden to plant and water, mulch and weed. We gathered for food and worship, and simple fellowship. We had folks from the Independent Care apartments bring a dessert to one potluck in the garden. Ruthven United Methodist Church kept Growing and Giving during pandemics and uncertainty. Slowly we are connecting with the community and younger families who can learn about God’s Love as they learn about growing, preserving, and preparing the gift of home-grown food,” said Hackbart.

With more workers and prayerfully additional grant funding, the congregation hopes to deliver monthly Smile Sacks. The plans include efforts to include students for community service hours and younger family gardeners. 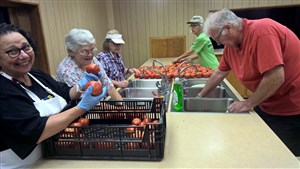 A survey conducted in late fall 2021 yielded great appreciation and suggestions for additional items. Some mentioned the greetings at the door are unique, as well.

A couple of young families have started attending church. The long-defunct church Sunday School program has just restarted because of contacts made through outreach to families.

“After all, ‘IT REALLY ALL STARTED’ in a garden! Right?” said Horsley.

If you want more information for your own church mission Smile Sack project or would like to help garden, harvest, purchase or pack and deliver Smile Sacks, contact: Missions Committee, Ruthven United Methodist Church, 1402 Rollings Street, Ruthven, Iowa 51358 or call the church at (712) 837-4623.

Submit written In Mission Together stories along with a photo(s) that you may have or video clips with the purpose of the articles to be published by Conference Communications and shared with Iowa United Methodists. Please send them to Sue Hattel (shattel220@aol.com), Conference Mission Education Chair.