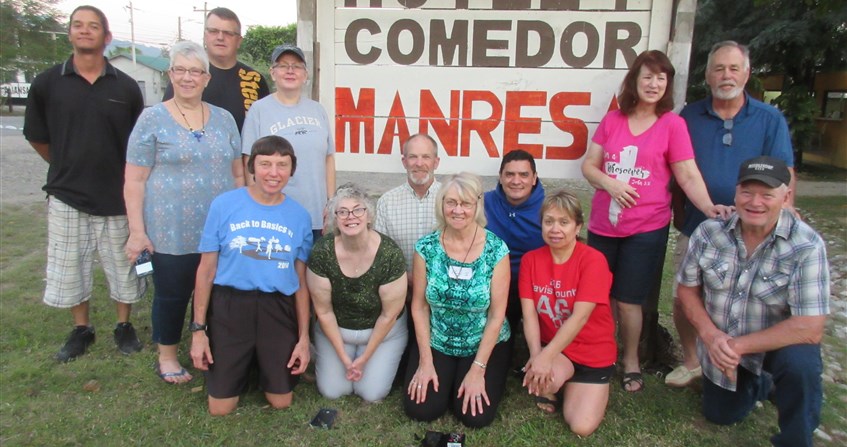 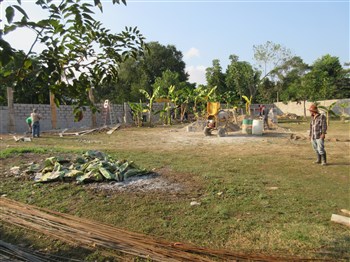 “Sitting outside in a church service the last night we were there, I looked around at all that has happened in the last six years,” Eakins said. “The church was built from nothing and includes bathrooms, a kitchen, an addition, and now the construction project this year was to finish the final side of the security fence wall around the property.”

A meal program that was begun a year ago is thriving and positively impacting the health and nutrition of the people there. After school meals are offered several days a week during the school year. They feed about 100 during the school year and about 30 during the break, and some adults are included as well. For some families, this is the only food they get and they can take some home.

Local people are also involved in furnishing food and one farmer who received seeds from Rowe last year donated some of his produce back for the meals. 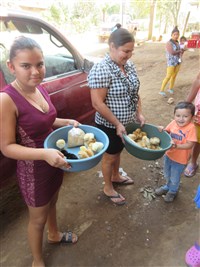 Olinger started a project called “Restock the Flock” after the avian flu wiped out their poultry several years ago. In four years the group has given out over 9,500 chicks, with about 4,100 given this year. People walk, ride a motorcycle or in the back of a truck to get them, and it’s quite a big deal to receive 10-15 chicks and a little starter feed.

“One lady traveled two hours on a motorcycle to get chicks and was all smiles when she saw the little ones,” Olinger said.

Other projects done by the group include Vacation Bible School with singing, stories, crafts, games, and sewing projects with the women and young girls. Many sewing materials were taken to do embroidery, cross-stitch and knitting. Money was also given to purchase more sewing machines for the ladies. The children also enjoyed playing card games like UNO, blowing bubbles, and using sidewalk chalk.

Marisela, a native of Mexico City, was invaluable as a translator for us. The people all related to her very well.

Part of the group also went to the village of Subirana, up in the mountains more. There they gave out chicks and visited a coffee farm.

Growing coffee and processing it is very labor-intensive. “If people knew how much work goes into each cup of their coffee they might have even more appreciation for the drink,” Rowe said.

“Just to feel the love of God and realize it’s not just here — it is global no matter the circumstances. This is very special,” said Olinger.

“The more we go back the more we get to know and love each other,” Rowe commented.

*Some excerpts reprinted from The Bloomfield Democrat with permission.