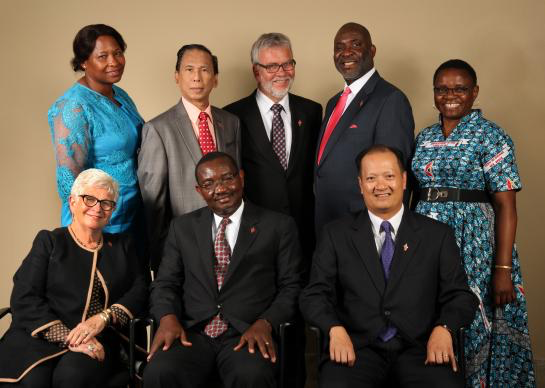 The Judicial Council, United Methodism’s “supreme court,” upheld Bishop Laurie Haller’s ruling on a “decision of law” raised during the 2017 annual conference session.  The decision announced on October 26, 2017, came during the Council’s fall meeting.  The question was raised “regarding the complaint procedure involving a clergy member who was reported to have publicly declared to be ‘a self-avowed practicing homosexual’,” according to the opening of Decision 1351.

In brief, the Judicial Council noted, “The Rulings of the Bishop on all five questions presented are affirmed.”  Four were described as “clear efforts to relitigate a complaint procedure that was closed and completed by the previous Bishop.”  One was deemed to be “hypothetical,” which the Council affirmed.

The request came from Dr. Craig Scott during the afternoon session on June 11, 2017, and was submitted, in writing, prior to the close of the Annual Conference Session.

“The request is predicated on two events. The first was the public disclosure on June 22, 2016, at the 2016 Iowa Annual Conference, by a United Methodist elder and member in full connection, who is duly appointed to ministry in the Annual Conference, that she, among other things, is “a self-avowed, practicing homosexual.” The second event was the dismissal by a different bishop—who was then serving as the resident bishop of the Iowa Annual Conference—of a complaint arising from the elder’s June 22, 2016, statement. The request then states, accurately, that the elder continues to serve in the Annual Conference as an appointed elder in good standing,” according to the Judicial Council document.

The complaint, brought in 2016 against Rev. Anna Blaedel, was dismissed on August 30, 2016, by Bishop Julius Trimble just days prior to the conclusion of his tenure as the Resident Bishop of the Iowa Annual Conference.  (Bishop Laurie Haller became Iowa’s episcopal leader on September 1, 2016.)

Dr. Scott raised five questions about the process by which the complaint was dismissed including asking if the complaint was dismissed according to pertinent paragraphs of the Book of Discipline “and other relevant church law.  He also asked if her “ministerial office [may] be subject to further review” and if her statement that she is “‘a self-avowed practicing homosexual’ or an ‘out, queer, partnered clergy’” has an impact on whether she meets “the minimum requirements for ordination and appointment.

Bishop Haller issued her “Decision of Law” within thirty days.  In her June 28, 2017, document she noted that she had “no authority to rule” regarding four of the questions and that a fifth was “hypothetical.” In its “analysis and rationale, the Judicial Council noted, “We are asked to answer five discreet questions in this case. Four of these questions challenge the complaint procedure followed by the previous Bishop in response to the 2016 complaint filed against the elder in that case and this. All four of these questions relate to the previous proceeding and attempt to relitigate a closed complaint procedure which was finalized by the dismissal of that complaint. The first question specifically asked for the bishop to rule on the procedure followed by the previous presiding bishop in an administrative matter. The bishop correctly ruled that a bishop does not have the authority to do so.”

The Judicial Council concluded by stating, “A review of the minutes of the June 11, 2017, afternoon session of the annual conference reveals that the questions presented in the request for a decision of law were not related to the regular business, current consideration nor discussion of the conference session. We affirm the rulings of the Bishop on all five questions.”