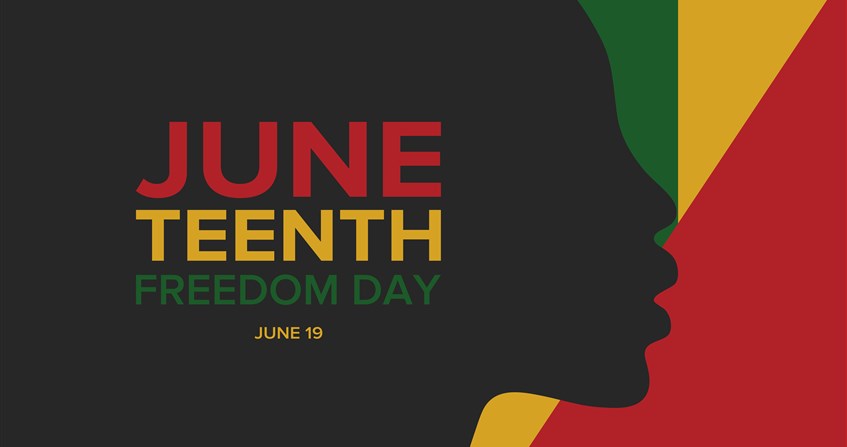 Juneteenth is the oldest national commemoration marking the end of slavery in the United States. Dating back to 1865, it was on June 19 that the Union soldiers, led by Major General Gordon Granger, arrived at Galveston, Texas with news that the war had ended and that the enslaved were free; this was two and a half years after President Lincoln’s Emancipation Proclamation - which had become official January 1, 1863. Enslaved people were then formally emancipated, and slavery officially abolished by the 13th Amendment in December 1865.

Since 1865, events of remembrance include family gatherings, community cookouts and picnics, cultural and educational events, worship and prayer, and collective action.

Juneteenth Resources: “As we still, in this moment, grapple with anti-Blackness and other forms of racism, Juneteenth reminds us that the quest for liberty, flourishing, and justice for all remains elusive. The events of the past few years painfully illustrate this point: from the murders of Black and Brown people, such as George Floyd and Breonna Taylor at the hands of police officers, to the dramatic rise in hate crimes aimed at Asian Americans and Pacific Islanders, and to attempts to repress Latinx immigrants. All demonstrate that systemic and individual racism still costs souls and lives.” (Religion & Race)

“As the oldest national celebration of the end of slavery, observing Juneteenth is a symbolic, but important step in the movement toward racial justice,” said Susan Henry-Crowe, General Secretary Church & Society. “We encourage all to use this day to reflect on our Christian calling to advocate for racial equity and find ways to take action in their own communities.”

“The symbolic meaning of the delayed emancipation for Black Americans is pertinent to the Christian church and the fuller society today. Like the story of the widow’s mite (Mark 12:1-44, Luke 21:1-4, wherein Jesus praises a widow for giving her two cents aka mites at Temple, saying she has given more than the rich, as she has given her whole livelihood), we serve a God who bids us leave no one behind. Our call is to take the Good News of Christ’s salvation, liberation, and release for all people into the world. Yet, systemic racism in church and society continues to impact our ability to be faithful followers of Christ and the repairers of the breach.” (Religion & Race)

"The truth is, Juneteenth has always mattered. The problem is it wasn’t taught in school; it wasn’t remembered in the majority of churches; it wasn’t named by those in leadership. That means one of the most important historical events in Black history is still fighting to be seen. Africans survived impossible conditions on slave ships. They were subjected to all manner of inhumanity and indignity and treated as mere chattel. And today, their descendants still must fight for basic equality, justice, inclusion, and belonging. Let us not forget that Juneteenth is not just Black history, it is American history. Let us all confess and remember the suffering even as we commit ourselves to work toward racial justice in our churches, state, and nation.” Rev. Dr. Lanette Plambeck.

Religion & Race. (2021, June 9). Juneteenth: Staying the Course of Freedom and Flourishing for All. https://www.r2hub.org/library/juneteenth

For more information and registration for the trip,
please contact Shelly Burch or Abraham L Funchess at
319-291-4441

Participants engage in a week-long journey exploring iconic human and civil rights spaces in Memphis, Birmingham, Montgomery, and Selma. In addition to museums in most of the cities, we also visit the Lorraine Motel in Memphis; the 16th Street Baptist Church and Kelly Ingram Park in Birmingham; the Equal Justice Initiative’s new Lynching Memorial in Montgomery; and the iconic Edmund Pettus Bridge and Brown Chapel AME Church in Selma, among other interesting sites. This extraordinary pilgrimage satiates the participants’ quest for greater meaning as we contemplate the cornerstones of democracy.

We start the trip from Allen College in Waterloo on Monday (Nov 8) at 0700, and we return to the same location on Friday night (Nov 12) by 2300. Participants are able to leave their cars in the Allen College parking lot at no cost for the week.