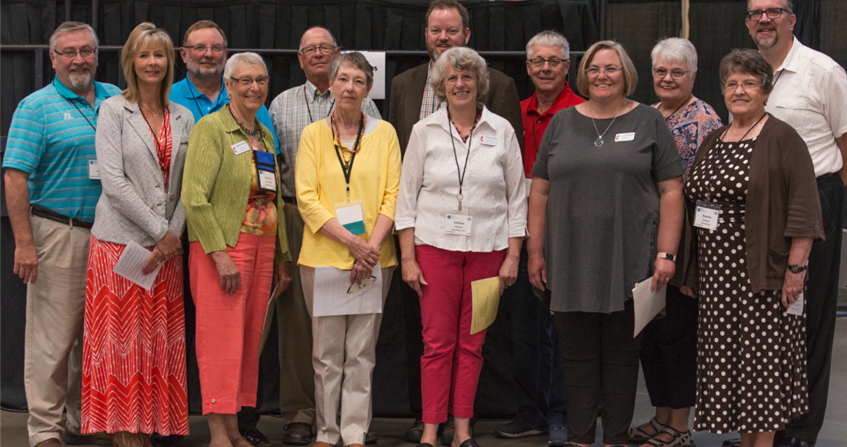 Bishop Laurie Haller opened the Laity Session on the first day of the 2017 Annual Conference Session, telling the laity, “We are partners together.”

The bishop addressed lay persons of the Iowa Annual Conference before leaving to attend the Clergy Session, saying first she’s always it was important for the Episcopal leader to be part of the Laity Session.

The bishop cited President Franklin D. Roosevelt’s 1941 Four Freedoms speech (freedom of speech, worship, freedom from want and from fear). The speech had been made prior to the U.S. entry into WWII.

She also read Eleanor Roosevelt’s nightly prayer of her vision of a world made new. The former First Lady was the first Chair of the United Nations Human Rights Commission, her work, along with her colleagues would lead to the adoption of the Universal Declaration of Human Rights in 1948.

Bishop Laurie mentioned the Good Samaritan in her remarks for the laity, asking, “Who is our neighbor?”

Before concluding to join the clergy, Bishop Laurie told the lay people at the Annual Conference Session that the laity are the heart of the church.

The Iowa Conference Board of Laity was introduced at the session, where Board members recited favorite quotes that inspire them in their work.

Specifics were detailed of the activities and business conducted by the Board of Laity at the Annual Conference Session, as well as the numerous opportunities at the Session this year related to the Board of Laity.

Metro Brass performed music for meditation for the laity, as well as a postlude.

Board members shared that the laity could lead as difference makers through working on their own personal spiritual growth and by encouraging others to so, as well as by sharing their ideas with others.

Members of the laity were given the opportunity to share ideas with an exercise prompting them to consider ways they’d already been making a difference and documenting them to share at the Annual Conference Session.

Laity in attendance were told they were already making a difference simply by coming to the Annual Conference session and by attending the various program available to laity.

Iowa Annual Conference Lay Leader Margaret Borgen told those present that lay leaders from each district would be developing unique programs for the laity in their respective districts, encouraging them to watch for these.

There would also be a video coming for churches to use on Laity Sunday this October, she said, the video covering learning and growth opportunities.

“Watch for that and take the initiative to use it,” Borgen said.