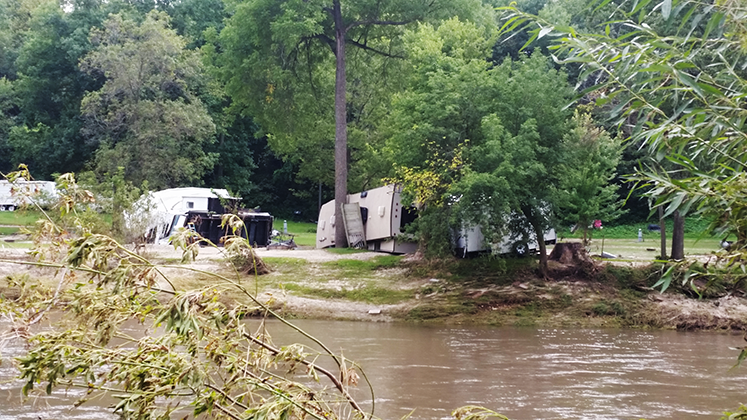 September 05, 2016
share
“We had some severe thunderstorms and the rain came down a little heavier than was anticipated,” says Rev. Kevin Smith, pastor of Lansing United Methodist Church, describing the flooding that affected a number of Iowans on August 22 & 23. “In Lansing, we had seven inches of rain overnight. We had a couple areas that had over eight inches of rain. And along the Upper Iowa River basin, flood waters came up so quickly that a lot of people weren’t able to get things moved to higher ground.”

Listen as Rev. Kevin Smith talks with Dr. Art McClanahan about the flooding in an Iowa Conference Conversations podcast

A campground along the basin was hit particularly hard. “They started moving campers around midnight or so, and they still lost seven of them to the river, along with their offices. A neighboring household had over two feet of water on the main level. A couple of other neighbors close by I understand had quite a bit of water in the lower levels of their homes. And there’s a lot of stored grain that’s very wet,” he adds. Farmers have been moving the grain into dry storage, hoping they can get it dried out so that it doesn’t go to waste.

Rev. Smith and his congregation moved to action as soon as possible, getting flood buckets and distributing them around the community. “I made some contacts with a few people in Lansing that I knew were going to need some help with cleaning up, so Saturday I was able to get buckets out to them,” he explains. Then on Sunday morning, the congregation took about 70 buckets to people in Dorchester, which is about 15 miles from Lansing, and to those living in houses that were flooded along the Upper Iowa River. 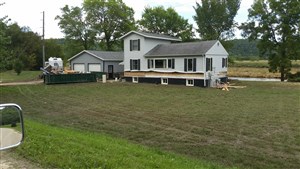 “We’re kind of spread out up here, but most people know somebody in the area, and they kind of have an idea of who has been hit and who hasn’t been hit,” says the reverend. He’s been following up with other neighborhoods, too, trying to get flood buckets out to anybody who might need them.

“Most of the clean up inside is done,” he reports, noting that people are getting the interiors of their homes dried out and bleached down. The outside clean-up work will be next. “They’re waiting for the ground to dry up enough to be able to get in and clear out debris, downed trees, sheet metal, things like that that came up with the flood waters.” 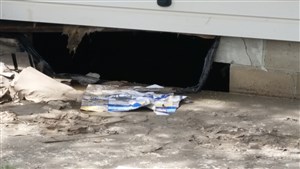 Unfortunately, this situation is not new for many of the people in this area. “Most of them have been through some sort of flooding like this just recently,” he says, recalling the floods in 2008. Some folks are frustrated that it took long enough to get back to normal after that flooding, and now they are having to contend with it again already. But others are more philosophical. “A couple of the others have said it’s one of those things they’ve been through; they guess they just kind of know what to do when it happens. It’s one of those things, they just do it now and hope for the best as things get dried out and they clean up.”

Rev. Smith thinks that the next step will be when they get to where they could use some help with larger clean-up efforts, like removing logs and other debris that’s swept up into the yards. “And I’m sure this fall, during harvest, there are going to be several farmers that, if they’re able to harvest their fields, are going to need extra help just to make sure they don’t hit the debris that’s hidden in the fields,” he says.

“The biggest requests I’ve had is for prayers as people do what little they can right now.” Other than that, Rev. Smith and the people of Lansing UMC are planning to be available to form clean-up crews so that they can help out further when the time comes.