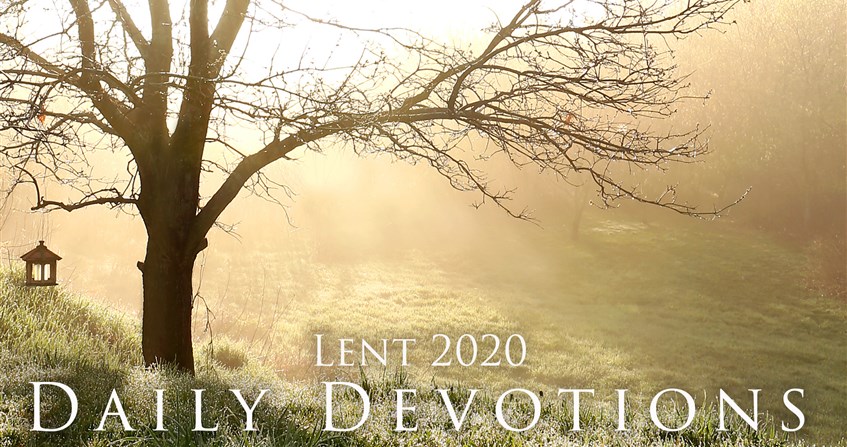 The 40-day season of Lent began on February 26 and Bishop Laurie, clergy, and friends of The Iowa Annual Conference have written short devotionals for each day to help us journey through this season together.

If you would like to receive these daily in an email, subscribe here. They will also be published in the News and will be included in our Weekly 360 e-news each Friday during Lent.

Blessed are all who fear the Lord,
who walk in obedience to him.
You will eat the fruit of your labor;
blessings and prosperity will be yours.
Your wife will be like a fruitful vine
within your house;
your children will be like olive shoots
around your table.
Yes, this will be the blessing
for the man who fears the Lord.

May the Lord bless you from Zion;
may you see the prosperity of Jerusalem
all the days of your life.
May you live to see your children’s children—
peace be on Israel.

Therefore, holy brothers and sisters, who share in the heavenly calling, fix your thoughts on Jesus, whom we acknowledge as our apostle and high priest. He was faithful to the one who appointed him, just as Moses was faithful in all God’s house.  Jesus has been found worthy of greater honor than Moses, just as the builder of a house has greater honor than the house itself. For every house is built by someone, but God is the builder of everything. “Moses was faithful as a servant in all God’s house,” bearing witness to what would be spoken by God in the future. But Christ is faithful as the Son over God’s house. And we are his house, if indeed we hold firmly to our confidence and the hope in which we glory.

They traveled from Mount Hor along the route to the Red Sea, to go around Edom. But the people grew impatient on the way; they spoke against God and against Moses, and said, “Why have you brought us up out of Egypt to die in the wilderness? There is no bread! There is no water! And we detest this miserable food!”

Then the Lord sent venomous snakes among them; they bit the people and many Israelites died. The people came to Moses and said, “We sinned when we spoke against the Lord and against you. Pray that the Lord will take the snakes away from us.” So Moses prayed for the people.

Honoring God is a blessing

Then the King said to his servant, "You say that God is great but he has not withheld this beast from me, nor withheld him from biting off my finger." The servant answered the King, saying, "God shall not deceive himself. For the sake of the servant's declarations, the King sent his servant in prison."

When the King recovered his hand, he went to hunting as he does in his life, when he began hunting, a beast appeared and the King ran after the beast to a nearby country.

They seized the King because he was not a citizen. Then they captured him and wanted to burn him as an offering to their gods. But when they examined him to see if he was the best offering to their gods, they found that he was missing one finger. They did not want to give their god an incomplete offering so they let the King go.

When he got home, he let his servant free from prison. Then the King told him all that had happened to him when he went to hunt and his servant repeatedly said that God was never wrong, not even one day.

The king replied, "If God is never wrong, why did he allow me to put you in prison?" The servant answered him with great joy, saying, "I would have been with you that day when you were captured and about to be an offering to their gods. They would have charged me instead of you because I had all my fingers."

In response, the King rose and embraced his servant with a generous heart. The King from that day knew that God is greater than all things.

Human beings needs to respect and obey God; in addition, respect and love are the most foundation of a better life. And then leadership came from heaven, think about this: God rules Jesus, Jesus rules parents, parents rule their children. Children obey their parents, parents obey Jesus, and Jesus obey God.

Dear God, I will always be in awe when I think of how great your love for me and everyone in this world is. We weren't anywhere close to righteous when you sent your Son, Jesus Christ, to die for us; but that did not stop you. Lord, I will always set my heart on loving you, and be ever grateful that you loved me first. In Jesus' name, I pray. Amen