Looking into the future - Vision 2032 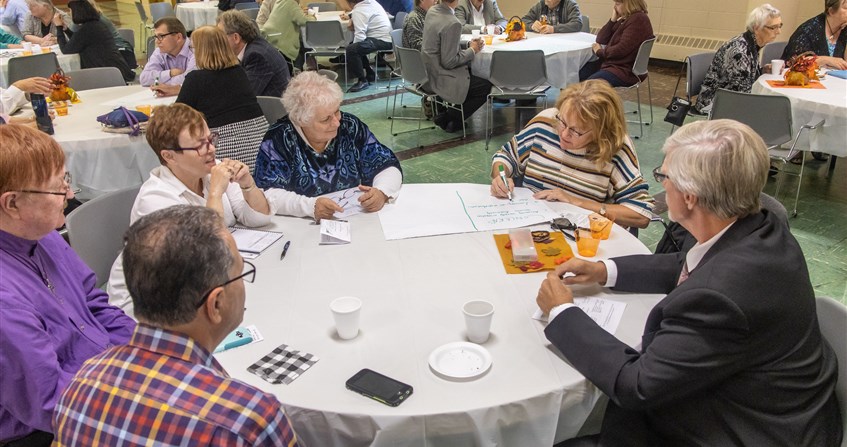 October 15, 2019
share
Faith communities, lay and clergy, and leaders are looking into the future of the Iowa Annual Conference, to discern Vision 2032.

To be able to do this most effectively, with the greatest input from across the Conference, a series of listening sessions has just begun. The first conversation took place on Sunday, October 13, at Mt. Pleasant United Methodist Church. In the coming weeks, through the end of November, an additional seven sessions will take place. (See the schedule here.)

“The year 2032 comes from the recent Leadership Institute at the Church of the Resurrection in Kansas City,” Bishop Laurie said, as she began the Mt. Pleasant gathering. She was asked to share her long-term vision for The United Methodist in a panel presentation with three fellow United Methodist bishops. She asked of the people at the Sunday listening session, “What kind of church do we need there to be in Iowa thirteen years from now that will be a beacon of hope in our villages, towns, cities, and for the world?”

From Bishop Laurie’s perspective, “Relationships will be more important than theological convictions.” She believes “in the church of 2032, innovation, creativity, and imagination will be more important than stagnation, rigidity, sacred cows, and the status quo.” She believes that new ministries will evolve organically “from folks who have a particular passion.” She is also convinced that faith communities “will become 24-hour a day saving stations that host various community groups” and that house churches may emerge. She is excited about the possibility enthusiastic and visionary “new young leaders” whose enthusiasm will be celebrated.

In 2032, Bishop Laurie is convinced the primary focus of the church “will be on the Great Commission and the Great Commandment: to go out into the world and make disciples of Jesus Christ and to love God and our neighbor in all that we do.” For her, the future is exciting and near. “The Good News is that Jesus is at work in communities all over Iowa and around the world.”

Newly-installed Superintendent for the Southeast District, Rev. Doug Cue, offered some context for the conversation and impetus to imagine an Iowa Conference Vision 2032. Noting that The United Methodist Church “has been engaged in mission and ministry throughout Iowa and the world, [which] is our spiritual heritage,” he noted that, “lately it has been a tough season for the people called United Methodist.” He suggested three reasons why: loss of connection, concern for the future, and economic challenge. Nevertheless, he added, “We love our God. We love our churches. We love our communities. And we believe there is a future with hope for the church of Jesus Christ.”

Much of the afternoon gathering, which ran from 4:00 pm until 5:30 pm, was devoted to table discussions. The conversations were framed by several realities.
A frank financial assessment from the Conference Council on Finance and Administration and detailed listing of staffing realignments were also presented.

Three key questions were discussed at each table. The comments, observations, and suggestions were then presented to the entire group.

All of the information gathered at during the Iowa Conference Vision 2032 listen session was collected, as will that generated at upcoming events. Comments will be posted on the Conference website at: www.iaumc.org/vision2032. Video recordings of Bishop Laurie’s perspectives and the context statement will also be posted there. In addition, questions and comments may be sent to: vision2032@iaumc.org.

Bishop Laurie closed the gathering by asking those present “to be in prayer for a new vision for the ministries and missions of the Iowa United Methodist Church.” She also extended an invitation to join in a prayer ministry and to send expressions of interest to the Vision2032 email address.

Click here to see an album of photos from the Vision 2032 gathering at Mt. Pleasant.