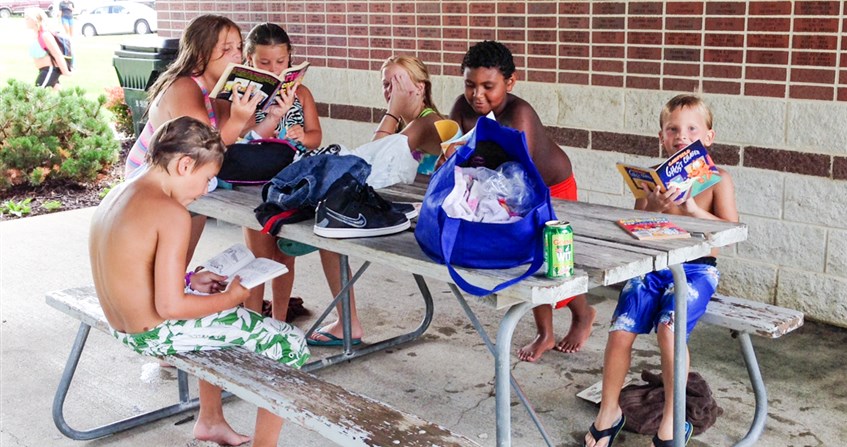 April 22, 2016
share
Rev. Jena Manchester, pastor of St. John’s UMC in Mapleton, was collecting books for the Change A Child’s Story initiative to take to the Annual Conference when she started thinking about what those books might be able to do to help people in her own community. “I was praying about what could we do with the books -- how can we change a child’s story? And the answer I heard was ‘Take ‘em to the swim pool.’”

Reading at the Pool

So she managed to get more than 50 of those books that she had collected for Annual Conference back, and then received permission to give them away at the community swimming pool. “Within the first week, we were out of books,” she says.

Click here to listen to the conversation with Rev. Manchester

“I didn’t know if we were going to be successful or how many people we needed or would support this in the church. And it was absolutely amazing. The kids were, the first day, like kids at McDonald’s with French fries, putting their arm around the stack of books saying ‘Can I have all these? Is this for real?’”

As is often the case with French fries, the kids’ eyes may have been a little bigger than their stomachs at first, so she suggested that they only take one or two books at a time. “They said, ‘Will you be back?’ And I said, ‘Absolutely. I’ll be here in Tuesdays and Thursdays. Come get books, you can keep them, share them with your friends.’ And we were there for the rest of the summer, for the months of July and August, and we gave out over 400 books.”

A Different Kind of Nourishment

Then Rev. Manchester thought of another place where books might be welcome: the church’s monthly food distribution program, Open Cupboard. “We set up a table of books, and we gave out close to 50 books just in one day. It was absolutely amazing. They said it was the quietest food distribution ever because there were kids reading books.”

As with the swimming pool distribution, it became a regular thing. “The next month at Open Cupboard, we had books for, not just kids, but for adults, teenagers. We gave away between 40 and 50 books every month at the food distribution, and we’ve given away over 400 there as well. It’s just been pretty cool how we connect with the kids, the teenagers, the adults. All because of books.”

Participating in the Change a Child’s Story initiative in this way has also been great for Rev. Manchester’s congregation. “I have folks from the church who are seeing this as a really cool thing, and they were on board. There were some on board last summer, and they’re now asking ‘Are we doing this again?’” She has assured them that they are and is already asking people to help out. “Just by inviting people to be a part of it has just been wonderful experience in the church, in our community,” she says.

Because they have been running out of books so quickly, the reverend has had to look around for resources to get more. She happened upon a used bookstore in Soldier, Iowa called Sheri’s Book Treasures, where the owner was kind enough to give her several boxes of them for free when she heard what they were for. “She said ‘Come back when you run out,’” reports Rev. Manchester. “Anytime we go back for books, for the swimming pool or the Open Cupboard food distribution, she’s said ‘They’re always free.’ And it’s just been a wonderful connection. She wants the same thing we want. We want kids to read.”

Kids Caring For Their Books

Another step that the reverend has taken in that effort is to spend time with the preschoolers at the town’s elementary school. “One of the first books that the librarian read to the kids last fall was about caring for your book,” she explains, noting that the book said you shouldn’t dog-ear pages, and that it also said you shouldn’t take a book to the swimming pool.

“When she got to that page in the book, there were like three preschool kids that turned and looked at me like ‘Did you know that?’ And I said, ‘No, you can take your books to the pool. We’ll give them away.’ So these kids in that preschool classroom knew that I was there giving away the books, and they were receiving books. And they were like ‘Will you be back?’ I’m like, ‘Yeah, we’ll get you some more books.”

The summer is almost here, so it won’t be long before those kids can enjoy their summer break both reading and swimming. “It’s been a lot of fun, and I look forward to getting more people involved. I don’t know if we can expand on Tuesdays and Thursday, but that’s where we’ll start. That’s where we started, that’s where we’ll pick up this year.”