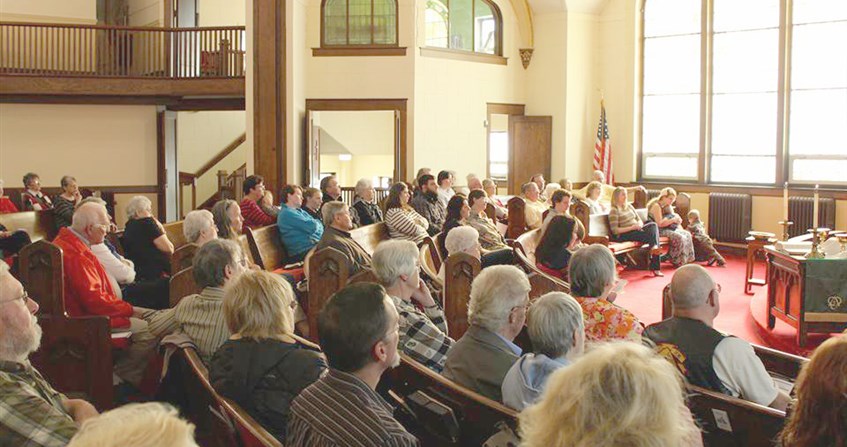 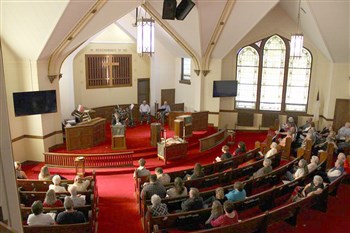 Church members and clergy, past and present, gathered on a Sunday before Advent to commemorate Marengo United Methodist Church’s (UMC) 100th anniversary in its current site.

The worship service was very energetic, according to Pastor Matt German, with rededication of the church’s baptismal font, pulpit and the entire building, followed by a potluck lunch and memory sharing.

“It was vibrant,” Rev. German said, “with the presence of the Holy Spirit.”

Methodists have a history in the Marengo area dating back to when Iowa first became a state, with the church itself celebrating its 100th anniversary back in 1946.

Religious services were first held at a store in town before they moved to the Marengo church’s various previous sites, the first built in 1851, and the second in 1888, and then construction of the present church building, which was completed in 1916.

“We were intent on not just looking back, but looking forward as well,” Rev. German said of the November 15 anniversary event. “We put a lot of emphasis on not only remembering but also looking forward.”

Located in a bedroom community for Iowa City and Cedar Rapids, Marengo UMC has a very diverse demographic, he said, offering both traditional and modern worship.

“We have a rich history and vibrancy in the traditional,” said Rev. German, “we lift those up as well as we value that God speaks in many forms.” 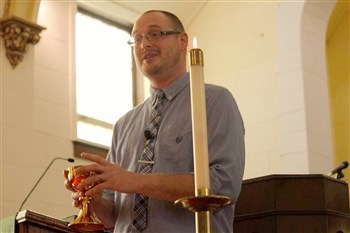 Church members really valued the time to share at the anniversary event, he said.

“We were overwhelmed with how much the congregation was willing to share,” Rev. German recalled, “how wonderful it was to look back and see the course of God’s action through ministry.”

Bishop Julius Trimble was unable to take part in the Marengo UMC celebration, as he was already committed to attend Marion United Methodist Church’s 175th anniversary. However, he sent the Marengo congregation a video message, in which he shared how he was glad to bring greetings to the church on the occasion of 100 years of ministry in its current location.

“Methodists were in Marengo in the 1800’s,” Bishop Trimble stated. “But we give thanks for the witness of Marengo United Methodist Church. And your opportunity to continue to share the love of Jesus Christ.”

Rev. Katie Dawson, lead pastor for Immanuel United Methodist Church in Des Moines, was pastor for Marengo UMC from January 2008-September 2012, and was part of the recent anniversary celebration.

“It was a great morning - good to be back in a familiar place with familiar faces,” she said. “It is funny how so many people are right exactly in the same seats they were in when you were last there.” 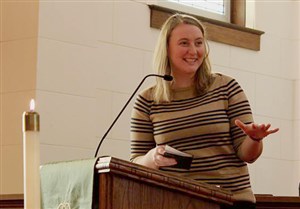 “It was also so awesome to see new faces in worship, too,” Rev. Dawson continued. “It is a reminder that God's kingdom keeps growing and changing and moving with the Holy Spirit.”

“It is like coming back for a family reunion and catching up on old stories and hearing all the tales of what has happened since you last met,” she said.

A number of the Marengo church’s former clergy who weren’t able to attend the anniversary sent written reflections that were read for the assembly.

Rev. Allen Wiese, now pastor for Chariton United First Methodist, recalled for the Marengo congregation how they had survived challenges and thrived, and said that he and wife Deb had prayed for them.

“The prayers we offer for you will not cease,” Rev. Wiese wrote, “for we will pray that the celebration of the past one hundred will be a covenant to continue the next 100 years as a beacon of light that others may see your faith and good works and give glory to our God above.”

Retired Pastor Morris Hurd said, “I cannot forget the years that I spent as the pastor of the First UMC in Marengo. They were special years to me. Christmas was so special with the locally cut tree and all the decorations.”

“The church was filled with many community and state-wide leaders,” he said. “We had far too many funerals and said farewell to so many saints and long term members.”

Retired Pastor Robert Robinson served Marengo UMC from 1961-1966, and sent scores of intricately detailed reminiscences for the Marengo congregation of how life was in town and at the church during the time.

“There was no elevator,” he wrote. “Whenever there was a church funeral the casket had to be lifted up over the newel post at the turn in the stairway. This was always a difficult procedure.”

“The chancel area has been remodeled in the years since I was pastor,” Rev. Robinson continued. “At the time, the choir sat behind a railing across the front of the church and behind the organist. The chancel was pulpit centered; however, the only time I stood behind the pulpit was to read the Scripture, otherwise, I was roaming across the platform and preaching without notes – although I had a fully written manuscript.”

Marengo UMC Pastor German said he was excited to be part of taking the church into the future.