Matthew 25 Hub provides for their community after the derecho 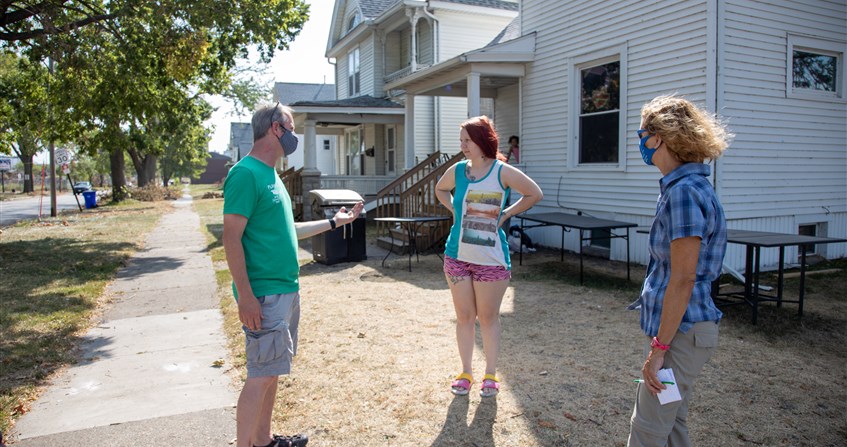 This is the third in a series of Faith In Action reports on how churches, ministries, and people from the Iowa United Methodist Church are making a difference and changing lives following the derecho disaster in August 2020.

The Matthew 25 Hub building in Cedar Rapids Iowa sustained major damage from the derecho disaster that blew through the region on August 10, 2020. The roof was badly damaged, and the inside experienced major water damage, estimating at least 3 months until the building is useable again. Despite this destruction, Matthew 25’s staff and volunteers have been serving the community rather than themselves first. They have been knocking on doors, asking what assistance was needed for families, and providing resources since the first day of the disaster.

See a gallery of images from the tour of the Timecheck neighborhood.

Although Matthew 25’s Cultivate Hope urban farm’s greenhouse roof has blown away, 20 of their 40 fruit trees are lost and many of the trees around their affordable rental properties are down, they remain thankful that their staff and tenants survived with no injuries reported.

With the damage to the inside of the Matthew 25 building and the recovery needs of the neighborhood, many of the employees have taken on new roles. Tim Salis, the Groundswell Café Chef now is now distributing generators to the community. With the derecho taking out power and cell service for several days, obtaining and distributing generators was one of the most pressing needs following the storm.

“We were prioritizing people with immediate medical needs,” said Salis. The first stage in the first few days was to make sure those families with pressing medical needs such as suffering from severe asthma, sleep apnea, or those on kidney dialysis had a generator.

“And people were great about saying, ‘We just don't have power. Serve somebody else first.’ Then we were able to circle back to all the people who were without power and provide a generator if needed,” said Salis.

Jana Bodensteiner, Director of Development and Communications, said Matthew 25’s mission of neighborhood revitalization and being small and nimble enough to discover the most pressing needs was key to getting immediate resources in place.

National TV host Mike Rowe, who is familiar with Cedar Rapids and Matthew 25 because of the 2008 floods, put a message on his Facebook page about the damage the derecho caused in the area and donations needed. Bodensteiner said that because of Rowe’s national attention they have received over $100,000 from across the nation.

Mathew 25 Hub also owns several affordable rental properties in the Timecheck neighborhood next to their community garden. One family of six, who were also without power, saw an opportunity to help.

They started cooking on grills outside of their home to provide meals to anyone who needed it.

“So, we went out and bought a whole bunch of food and started cooking,” said Michaella. She and her husband, who has been through disasters similar to the derecho said stepping up and providing meals is one of the ways he knew he could assist his neighbors.

Retired pastor Linda Butler lives next door to Michaella and her family. Linda's car took the brunt of the damage from the derecho, but prevented further damage to her home. A warehouse about a block away was destroyed and sheet metal and debris flew directly into her Subaru.

Next to Butler’s house is a home with a large tree smashed through the roof and debris from the warehouse blown into it, leaving it all but destroyed. The tenants of the home stayed on the upper level for three days after the derecho. Bulter talked about how selfless her neighbors are and how they always worry about her and her husband.

“She's practically adopted us even after she's gone through all of this. And her family said, ‘you don't have any family here’ so now we have an extended family of 20 and they kept bringing us stuff,” said Butler. “I’ve gotten to know my neighbors a whole lot better.”

In addition to providing generators, Matthew 25 Hub also provides free home repairs for those who meet certain criteria as well as free fruits and vegetables through their Cultivate Hope produce rescue.

For the past five years, Matthew 25 Hub has led a program called Transform, a weeklong effort to provide home repair for low-income homeowners. In the past, they have had around 300 to 350 volunteers help with the efforts. Because of COVID-19 and now the derecho, they have only received registrations from 20 volunteers and no corporate sponsors.

Even with the devastation of the derecho to their own homes and families, the Matthew 25 staff and volunteers continue to provide the assistance and resources needed for the transformation of their neighbors and neighborhood, continuing to serve others before themselves.