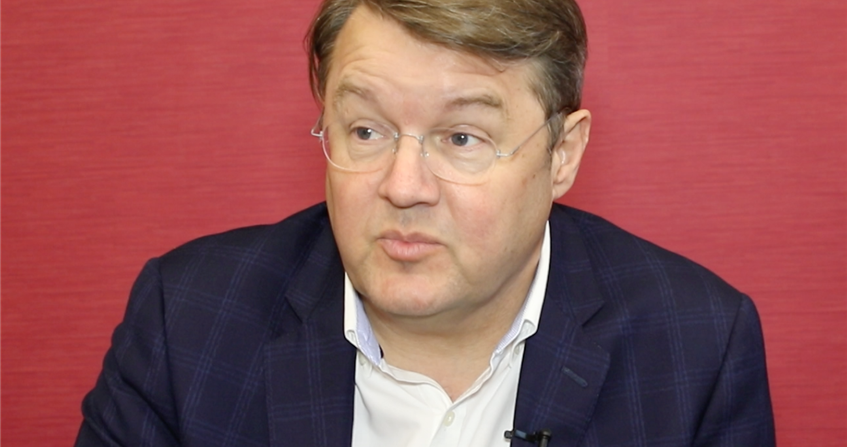 February 28, 2016
share
His new second floor office looks out at a peaceful mini lake.  But for Rev. Brian Milford, and indeed, for the United Methodist Publishing House, life is anything but tranquil.

Milford, an ordained Elder from the Iowa Conference was named incoming president and CEO of the oldest publishing house in North America last week.  This year he succeeds Neil Alexander at the helm of the denomination’s book and resource provider, having previously served in the capacity of Chief Content Officer and Book Editor.

For most of his career Milford served congregations in the Iowa Conference, first under appointment to local churches and then, most recently prior to moving to the Publishing House, as Conference Superintendent for the Southwest District.  A graduate of Duke Divinity School, he also had an opportunity to pastor a congregation in New Zealand for three years.  “The faithful people of those faith communities,” he said, “nurtured me and cared for me and taught me what it means to live out the Gospel of Jesus Christ every day.”  Those experiences, he added, “give me a sensitivity to what we need to provide through the work of the Publishing House.”

“Being a disciple is new every day,” he observed, “and yet, it’s built on the solid foundation of God’s presence in our lives and our world.”  Milford notes that such is also the case for the United Methodist Publishing House and it Cokesbury and Abingdon Press entitles.  Cases of letters in different fonts and sizes that were used in hand operated printing presses are displayed in the spacious new lobby/hospitality area, a reminder of the nearly 230 year heritage of the institution he will lead beginning in a few months.  And yet, “as our lives of committed discipleship must evolve,” Milford said, so too the Publishing House “adapts to change.”  On walls adjacent to the tools of the past, including book bins roll top desks, and historic photos of the “Methodist Book Concern” of earlier years are very large flat screens that display current publications and electronic resources.

The denomination’s Hymnal is one example of “adaptive change.” Across the centuries the “Methodist Hymnal” has evolved from being a thick volume smaller than 3” by 5” with words but no music imprinted on its tiny pages, to the red or purple or green bound volumes that are in the racks of the pews of the churches across Iowa, and the world.  And soon it will be different.  “There will always be congregations that want and need printed hymnals,” Rev. Milford said as he began to describe the proposal that will come to the 2016 General Conference.  “We’re proposing that we also create an electronic, cloud-based version.  We’ll probably have a hundred or so ‘standard’ selections, and from there a congregation can choose the hymns that suit its worship needs.”  Piano or guitar chorded versions or singer’s editions will be available to download or to be printed in customized printings or on tablets.  “The hymn collection will be able to grow, because it will be cloud based, to continue to bring together the best new music for our congregations.”  The proposal, if approved in May at the worldwide gathering in Portland, Oregon, will result in the new formats by the 2020 General Conference.

The United Methodist Publishing House was for years located in downtown Nashville.  “We had over 300,000 square feet with giant presses, massive storage areas for cases of printed books, and lots and lots of offices.”  Over time the printing presses fell silent and were even removed.  “Everything we print now,” Milford reported, “is digitally printed.  Many orders are produced as a ‘one off,’ which means that one of our customers can call us, order a title, and through our partners we will then have the book printed and bound and shipped, often within twenty-four hours.”  There will still quantities of books printed – best-selling authors for displays at annual conference and general conference book and resource displays “and Bibles, because the paper is different…but now, because most everything is produced digitally our customers can choose a print copy or order an electronic book and have the title on an ‘on demand’ basis.”

The headquarters for the United Methodist Publishing House has moved a few miles away from the old building, to “what was a shopping center that never really took off,” Amy Smith, the Executive Administrative Officer, observed.  After an approximately eighteen-month repurposing and construction process was completed Nashville’s Mayor helped to dedicate the new space.  He said, “The ‘mistake by the lake’ is a mistake no more,” Smith remembered.  “There’s a lot of natural light that streams into our work areas,” she said, walking through the building.  “We have approximately 100,000 square feet, so it’s smaller, but it’s so much more suited for who we are today, and who we will be in the future.”  There are media rooms with multiple screens and electronic connections built into the standup height tables and accompanying stools.  “People come here to work together and can share files from their desks or plug in right here,” Smith said.  “Collaborative rooms” are placed throughout the long, narrow building, that feature soft chairs with swing-away “desks” to support computers or writing with large flat screens, web cams for virtual meetings, and write on glass boards.

“We wanted people to be able to work together,” Milford said, “and so we have collaborative spaces and ‘huddle rooms’ where two or three people can step into a small, quiet space for a quick meeting, share their ideas on write-on boards and hook up electronically.”  The entire building is wired for quick connection and collaboration.  “We also have bright, open cafeteria that opens to the patio by the ‘lake,’ which is a place where we will be able to do some outside events such as concerts or other gatherings.”  The Publishing House’s new building also has a dedicated wired classroom where differently-abled students come for their programs.  “It will be a twenty-year partnership, which is a wonderful partnership,” Smith said.

So much is new at the building on Rosa L. Parks Blvd.  Corridors walk along one side of the building so that people can work and collaborate without traffic moving through their areas.  Volumes continue to be shelved in the Georgia Harkness Library.  The W. T. Handy, Jr. Chapel joins the Alexander Room into a smaller, or larger, space depending on need and event, all equipped with sound and projection resources.  A chaplain attends to spiritual needs.  A fitness center will promote health and wellbeing.  Bright, open areas are set in colors that shift from blues and greens to reds and oranges, in an east-west, sunrise-sunset design.  Historic photos, long-lost (and found in the move) presses, paintings, and graphics, and flat screens with announcements of the week and the newest titles are along the walls of the corridors.

Asked if the kinds of changes impacting the United Methodist Publishing House have affected him, personally, Milford said, “Yes, definitely!  I’ve adapted.  I’ve even sold my Hasselblad and have moved away from film into the new age with my digital camera!”

Could have ever imagined that he’d be where he is today? Rev. Brian Milford said, “No, never.”  And then he was quick to add, “God has continued to open exciting and unanticipated opportunities in my life.  I’ve been places I’d never thought I’d be – North Carolina, New Zealand, wonderful congregations and an extraordinary district in Iowa, and now here.”  Asked what’s next he said, “God knows the future…for what we’re doing here, for ways we can support United Methodists and others across the world, for what the next chapters of publishing will look like, and for me.  And that’s exciting!”