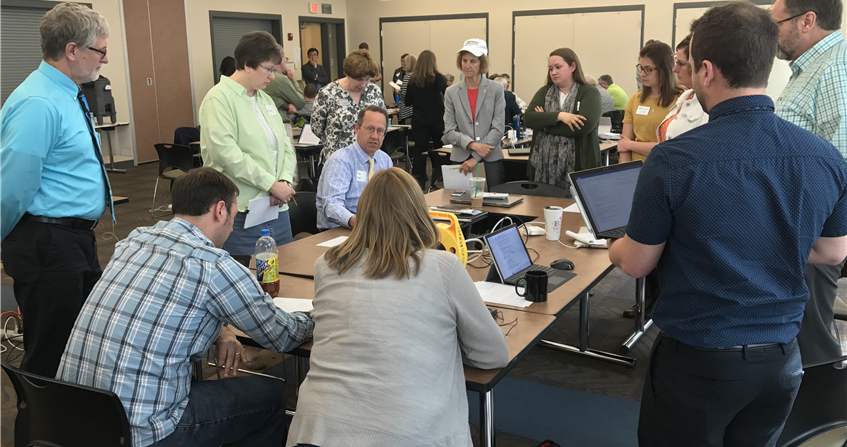 The teams all relate to the L3 – loving, learning, leading – perspective that has been brought to the Conference thorough the coaching of Spiritual Leadership, Inc. (SLI).  Stemming from the FACT report, the Strategic Priorities (2013) and the work of the Design Taskforce, an intentional Healthy Conference Initiative led to the collaboration with SLI.  Greg Survant, one of SLI’s co-founders, and Christin Nevins, an SLI coach, have worked with two ten-member teams – the Bishop’s Operational Team and the Cabinet Operational Team for nearly eighteen months.  SLI’s approach, as described on its website, invited team members to “first grow in their faithfulness to God and then their fruitfulness for God.  The latter is accomplished by learning the language of leadership and a set of cutting edge tools and processes for leading, then applying this learning through leading the organizations of which they are a part.”  The SLI approach is described as unique because “it starts with a focus on developing spiritually.”
Since late 2015 the members of the operational teams, and several teams that have emerged to focus on such ministries as communities of faith, leadership development, resource alignment, communications, district ministries, and, more recently, change management and stewardship, have invested eight hours per month meeting together, caring about and for each other, learning through a variety of research, readings, and media resource-based discussions, and developing ministry action plans for their particular areas. 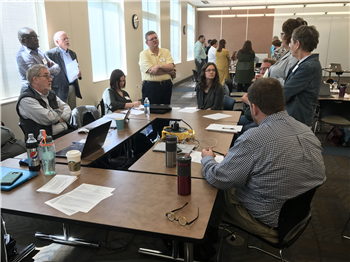 It was some of the more than 100 people, Conference-wide, who make up the “parent” and “child” teams who met together on April 24 to become better acquainted, learn about the focus of the respective teams, strengthen their common spiritual base in worship, and focus on the mission and vision of the connected, collaborative ministry of the Iowa Annual Conference.  As Christin Nevins said, at the beginning of the day, “We should expect the miraculous.”  And for her, even the gathering of the teams was a bit of that.  “Iowa is way out front of other Conferences that we’ve worked with,” she said.  “Meeting together like this, caring about each other, learning from each other, and forging ahead, together is a first.  We’d hoped others might do this.  Iowa is doing this!”

The team-based leadership that Nevins and Greg Survant advocate helps to bring about a clear focus.  “Ministry successes that we experience,” Survant noted, “are based on momentum and unity.”  That can lead to innovation and “multiplication where spiritual leaders help other to become spiritual leaders.”  Though a set of shared values “environments are created that foster transformation [and] generate success that can overcome adaptive challenges,” Nevins added.” 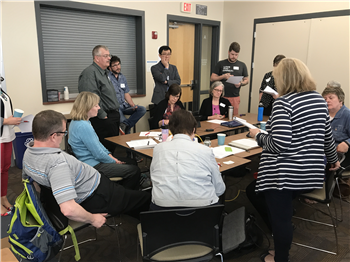 Rev. Barrie Tritle, who was one of the members of the design Task Force, the Bishop’s Operational Team, and coach of the leadership development team, provided additional insights that led to a discussion of mission and vision.  Seen as “two sides of the same coin,” mission – “a concise statement that establishes the direction for and boundaries of the work of a team,” (Survant) and vision, which “clearly presents to the world what things will look like in three to five years” (Survant) “will guide who we are and who we can become,” Tritle noted.

The nearly fifty people present, during the afternoon session, collaborated to express the mission and vision of the Iowa Annual Conference, something that people had been thinking about even prior to the April 24 gathering.  Groups of four, then 8, then 12, then half the room, and finally all, together came to consensus on the Conference’s mission (directional statement) – Inspire, equip, and connect Communities of Faith to cultivate world-changing disciples of Jesus Christ.  A vision (future glimpse) for the Conference was expressed as God’s hope for the world, made real, through faithful leadership, fruitful communities, and fire-filled people.  Or, in short: Hope made real.  Faith, Fruit, Fire.

These two statements are already being discussed at the pre-Conference Orientation sessions that are being held across the eight districts.  They will be presented to the Annual Conference session when it convenes June 10-12, 2017 at the Iowa Events Center in Des Moines.