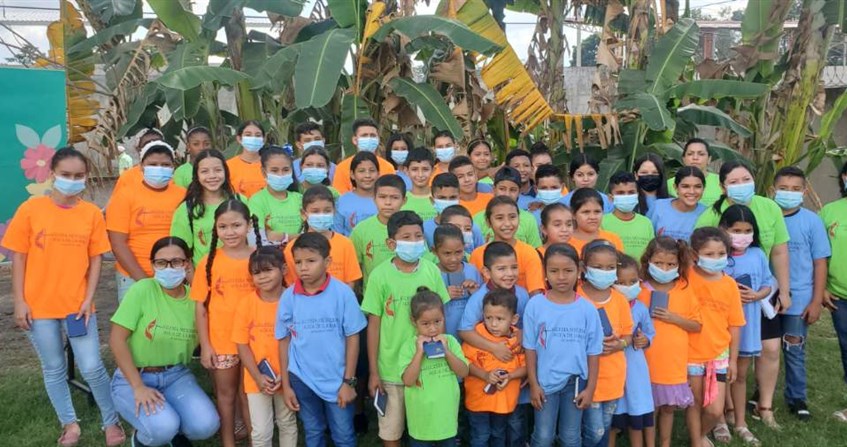 After two years of not being able to travel due to the pandemic, it was a real blessing for Clayton Eakins and fellow Davis County missionaries to renew their relationships in Honduras in January. They were welcomed by children of the church in El Negrito with signs that said “Never stop coming to see us." Great relationships have been formed by going to the same communities seven times now.

In the past there were some large construction projects, but this year they focused on smaller handyman jobs such as electrical work, covering a walkway, building shelves, etc. What began as an after-school feeding program has now grown into a feeding program for families three times a week. Families also bring containers to take food home with them.

The group also does a daily program sort of like Bible School. The ladies in the group focus their attention on the girls and women as they provide crafts, coloring, etc. in the morning and shift to a Bible School in the afternoon. This year the men helped out some too. Lots of mothers and teachers enjoyed the activities along with the children. They love the coloring, crocheting, embroidery, jewelry making, and more. The people are so loving with lots of hugs enjoyed by all.

Another project which has been very successful is the chick project. Years ago after the Avian flu hit their flocks, the group started giving each needy family 10-15 chicks to start their flocks over. People come from long distances by many means bringing all kinds of containers just to get a few chicks. This is now the fifth year and some enjoy telling stories of what has happened with their previous batches.

The group also took t-shirts imprinted with the name of their church that the kids wore all week. 100 Bibles in Spanish were also distributed to the kids by a team member who is a member of the Gideons. 100 pairs of reading glasses, used clothing and other donated goods were also brought by team members that make room in their suitcases. Then they have room to bring back the great Honduran coffee which is grown in the countryside near El Negrito. They usually visit a coffee plantation and learn all about the production of coffee. Many of their crops were hit and some washed out by the hurricanes in the past years, so seeds were taken and distributed to help them replant. Some of the seed recipients give back excess produce to the feeding program.

One regret the men on the team especially notice is that the young men of the church tend to drop out so they try to talk to them and encourage them that it can be cool to go to church.

All the help with giving them things and doing the programs is great but the really important thing is the relationships that are built with the people and spending time with them. We have built familial relationships by going back to the same communities year after year. It is difficult to say who gets the biggest blessing - those we go to serve or we who go.

The Bloomfield Iowa UMC has an In Mission Together partnership with the El Negrito UMC in Honduras but all team members are not just from the Bloomfield UMC.