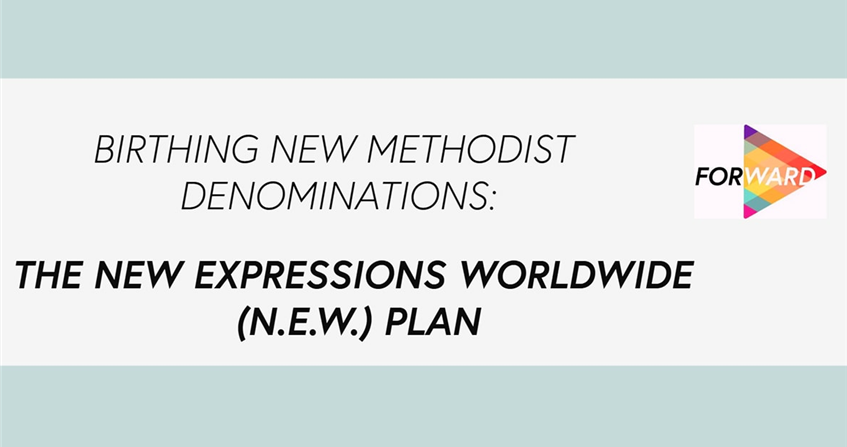 UM-Forward is proposing a plan to the 2020 General Conference that would split the existing United Methodist Church into four new denominations. Image courtesy of UM-Forward.

The legislation says the new Methodist expressions would be traditionalist, moderate, progressive and liberationist in orientation.

The New Expressions Worldwide, or N.E.W., Plan is the work of UM-Forward, a group that identifies as a collective of United Methodist liberationists. By that, group members mean that they seek to advance the liberation of the marginalized — namely people of color and LGBTQ individuals.

“Our plan is not the panacea, but it makes it possible for each denomination to fulfill their mission as they feel called,” said the Rev. Alex da Silva Souto, a UM-Forward leader and General Conference reserve delegate.

The N.E.W. Plan is among multiple proposals heading to the 2020 General Conference that aim to address the denomination’s longstanding division over the status of LGBTQ people. The denomination’s multinational top lawmaking body will meet May 5-15, 2020, in Minneapolis.

Like the N.E.W. Plan, a number of other proposals seek to dramatically reshape or divide the denomination over what drafters see as irreconcilable differences.

“Remodeling the house or replacing the roof and adding a fresh coat of paint are not going to address the detrimental cracks on the foundation,” said da Silva Souto, senior pastor of New Milford United Methodist Church in Connecticut.

However, the N.E.W. Plan differs from other publicized proposals in envisioning The United Methodist Church giving rise to four separate Methodist expressions, adding liberationists to a mix that usually includes traditionalists and some combination of moderates and progressives.

“While Progressives may be defined by a desire to include all people in the church’s current form, Liberationists are interested in radically reimagining the ways we relate to one another and the world," explains UM-Forward in its Frequently Asked Questions site. "We desire to be a church where the marginalized are centered, power is redistributed, and we are free to enflesh radical actions of prophetic love in solidarity with movements for justice taking place globally.”

The Rev. Alka Lyall, a General Conference delegate and UM-Forward leader, said the N.E.W. Plan is grounded in the liberation of those she believes have long been oppressed by the church institution.

“We have invested a lot of time, energy and resources in maintaining the institution and have lost our focus on the mission of our church,” said Lyall, who is also senior pastor of Broadway United Methodist Church in Chicago.

“Freeing ourselves from maintaining what is already dead, will free us to do the work that God has called us to.”

The plan calls for:

The group UM-Forward formed in 2018 to back the Simple Plan at February’s special General Conference. That plan would have removed all church restrictions related to homosexuality.

Instead, a majority of delegates at the lawmaking assembly adopted the Traditional Plan, legislation that maintains the policy that the practice of homosexuality is “incompatible with Christian teaching” and strengthens enforcement of bans on same-gender weddings and “self-avowed practicing” gay clergy.

However, immediately after the special General Conference, the plan faced resistance from people who see the measures as discriminatory against LGBTQ churchgoers.

N.E.W. Plan Materials about the proposal, including legislation, can be found here. UM-Forward also has responses to Frequently Asked Questions about the plan.

In May, UM-Forward held the Our Movement Forward summit at Lake Harriet United Methodist Church in Minneapolis to consider next steps. That gathering, which drew some 350 U.S. United Methodists, contributed to the plan.

The UM-Forward leadership team does not include any members in the central conferences — church regions in Africa, Europe and the Philippines. However, it does include members from outside the United States, including da Silva Souto, a native of Brazil.

The Rev. Jay Williams, a General Conference delegate who helped draft the plan, said he sees the plan as empowering to churches like the one he pastors. Union Church in Boston, which is today multiethnic, was the first predominantly African American United Methodist congregation to identify as reconciling — meaning it explicitly advocated for LGBTQ equality.

“Black people were largely enslaved in the USA when Methodism was formed at the Christmas Conference of 1784,” he said. “And black Methodists have spent the better part of our existence faithfully reforming Methodism and its sins of white supremacy, institutional racism and patriarchy. This plan imagines otherwise. The N.E.W. Plan says, ‘Let’s start from a place of shared commitment to equity, justice and liberation for all — the true core of grace and holiness.’”

Joy Butler, a lay member of St. John’s United Methodist Church in Austin, Texas, said she sees the plan as empowering crucial regional ministries such as the work the Rio Texas Conference does with immigrant families.

“The Holy Spirit is calling us to something new,” she said, “a chance to minister more fully with and to the world.”

Hahn is a multimedia news reporter for UM News. Contact her at (615) 742-5470 or newsdesk@umcom.org. To read more United Methodist news, subscribe to the free Daily or Weekly Digests.