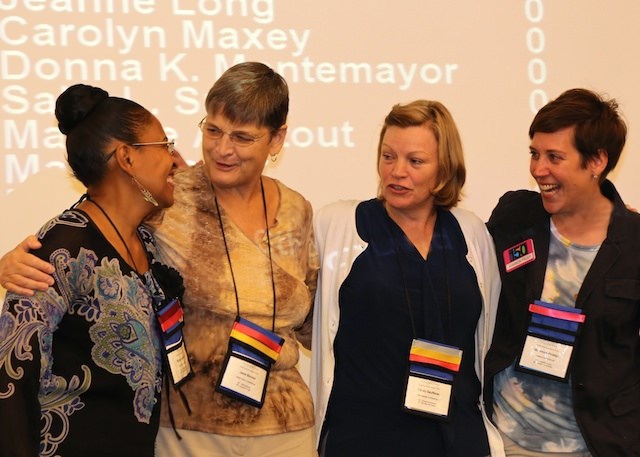 June 27, 2016
share
Elections happen every four years in the church and in the nation. All United Methodists know that. There’s campaigning and balloting for Bishops, Senators, and Representatives. But there are other elections that are just as significant though not as high profile.

Folks in all five jurisdictions in the U.S gathered in recent weeks to elect Directors to the National United Methodist Women. The Quadrennial Meeting for the North Central Jurisdiction took place in Grand Rapids, Michigan June 24-26, 2016.

Out of 20 nominated, four women were elected as Directors. They were, in order of election: Ruby Anderson (Detroit Conference); Cindy Saufferer (Minnesota); Shannon Priddy (Indiana); and Jane Benner (Ohio West).

Two-hundred fifty persons were in attendance, 59 of whom were voting delegates. Those who held the electronic keypads used in the tabulation included three delegates from each of the Jurisdiction’s 11 Annual Conferences and the seven bishops who were present in Grand Rapids for the event.

The four women elected by the NCJ will join 21 other new Directors in Houston for training in August. All will attend their first Board meeting in October.
Ruby Anderson, first elected, said, “As United Methodist Women we are faith-builders. I start by praying and asking God’s direction. ‘You know I am willing, Lord!’ Then I want to make a difference for everyone, with everyday justice and equity.” Ruby’s bishop, Deborah Lieder Kiesey, added, “Ruby has the right spirit and the right faithfulness to do what we need to have done. The United Methodist Women is a powerhouse group that brings about change.”

Nichea Ver Veer Guy, who is finishing a term as Director, notes, “I am very pleased with this slate. This will bring a young presence and energy. Shannon brings great expertise. We are not dead. We are alive! And Ruby! How do you bottle Ruby?” Former Director Jackie Euper pointed out that high energy is indeed important as the total number of UMW Directors has decreased from 50 to 25. “I am glad we elected a diverse group with good balance,” she said.
Ruby Anderson joins a fine company of Michigan women who have served as UMW Directors in recent years.

Fund-raising for the Legacy Fund went on through the event. The Fund is a permanent endowment dedicated to strengthening United Methodist Women. UMW will be celebrating 150 years of mission in 2019. The Legacy Fund represents a continuation of wise financial planning begun by the fore mothers and will be used to pay the administrative costs of the organization.

Building on a challenge started in the Northeast Jurisdiction by Bishop John Schol, the NCJ bishops were presented with a $5,000 target for giving. Before the morning was over all nine episcopal leaders contributed $500 each. Added to the women’s donations, the total to the Legacy Fund by mid-afternoon on Saturday was $13,053. “The Bishops showed up and shelled out,” said Shannon Priddy, who was cheer leading for the Legacy Fund.

Asked to comment about the importance of The United Methodist Women in today’s world, Bishop Bruce Ough (Dakotas-Minnesota Area) praised The UMW as the “driving force of mission” for The United Methodist Church concluding, “We need to ask God to empower us like that today.” Ough expressed delight over Cindy Saufferer’s election.

Bishop Gregory Palmer (Ohio West) affirmed The United Methodist Women’s consistent commitment “decade after decade after decade in standing up for the vulnerable, the left out and the locked out.” Recalling the Women’s rich history with settlement houses and outreach to immigrants, Palmer enthused, “I say, ‘Go, UMW! Go, Jane Benner, go!”

Individual women and UMW units in churches large and small are all engaged in Faith, Hope, and Love in Action. So what sets a Director apart? Shannon Priddy, one newly-elected to the office reflects: “The work is most important and most visible at the grassroots level. As a Director I can help make sure information from the top gets to the bottom. Today it is not enough to say, ‘I am a United Methodist Woman.’ We now need to be able to say, ‘I am an empowered United Methodist Woman making a difference in the world around me.’”

What makes an organization endure for 150 years? Whether the focus is fellowship circles or large scale advocacy efforts, perhaps Shannon’s observation says it simply and best: “No one should walk the world alone.”